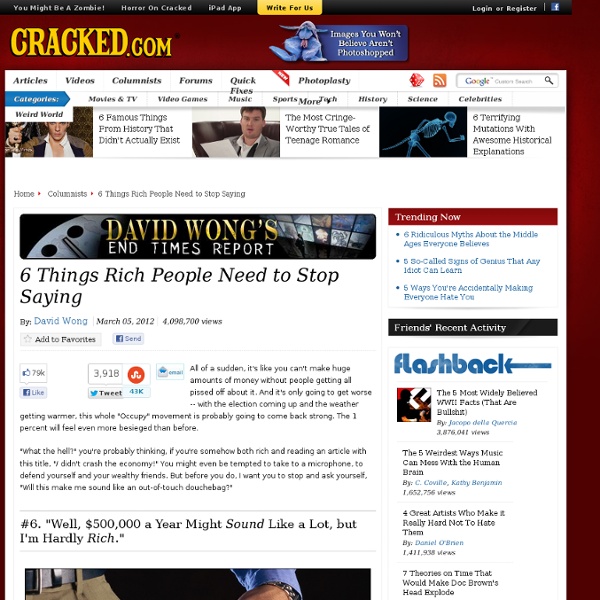 All of a sudden, it's like you can't make huge amounts of money without people getting all pissed off about it. And it's only going to get worse -- with the election coming up and the weather getting warmer, this whole "Occupy" movement is probably going to come back strong. The 1 percent will feel even more besieged than before. "What the hell?" #6. "The amount that I have to reinvest in my business and feed my family is more like $600,000 ... and so by the time I feed my family, I have maybe $400,000 left over ..." -- Congressman John Fleming Pictured here with his poverty. "It is hard to ask more of households making $250,000 or $300,000 a year. -- Senator Chuck Schumer What They Think They're Saying: "Come on, we're all in this together! What We Hear: "When my family's Aruba vacation went over budget, that was exactly like you being unable to afford medication for your child's excruciating chronic illness!" Getty"Look at how tiny my yacht is!" Getty"This stuff? #5. -- Wayne Allyn Root #4.

Not What the Doctor Ordered: 20 Million Could Lose Employer Coverage In all the hand-wringing over the last two months for Obamacare by “liberal” apologists, little has actually been said about the actual effects of the law. True, whether or not Obamacare is beneficial has little if anything to do with its constitutionality. (And the actual Constitutional issues involved, however valid, have little to do with the cynical politics behind the Supreme Court’s right-wing block in the case.) Hence one story that caught my eye in March: “20 million could lose employer coverage under Obama health care overhaul.” As many as 20 million Americans could lose their employer-sponsored coverage in 2019 under the health care legislation signed into law by President Obama in March 2010… The CBO’s most optimistic estimate, which the federal agency says is subject to a “tremendous amount of uncertainty,” is that 3 million to 5 million could lose their employer health coverage each year from 2019 through 2022.

The 5 Things That Separate Troubled Geniuses from Jerkwads Have you guys seen Sherlock? It's a pretty fantastic show, and it brings up some very valid points, such as: Does extreme intelligence always equate to isolation? Are human beings really just a collection of transparent self-serving impulses? And when, exactly, are Sherlock and Watson going to bone already? Just ... just touch him, Sherlock. But perhaps the most important question that shows like Sherlock, House and Luther raise is this: What's the difference between being a troubled, misunderstood soul and just being an asshole? #5. Getty The most obvious difference between assholes like me and Troubled Savants like House is that the latter are constantly making observations, while I'm constantly making crude snare traps to set around my box of Work Wine. "I'll take a large Irish, with room for coffee," I said, just waiting to T-bone her with the garbage truck of deductive reasoning. "Wait!" "What?! "Don't you dare touch my cup with those hands. "Excuse me?" "Your eyes. "Th ... the what?"

Full Spectrum Reading List: 7 Great Books by TED 2012 Speakers by Maria Popova Anatomy of introversion, inside the brain’s optimism bias, and a blueprint for doomsday from PC Guy. TED time is once again upon us, with this year’s conference, themed Full Spectrum, a mere week away. The question of what makes us happy is likely as old as human cognition itself and has occupied the minds of philosophers, prophets, and scientists for millennia. Underpinning the narrative is a fascinating and dimensional lens on the constant interplay of reason and emotion, intuition and rationality. Human rationality depends critically on sophisticated emotionality. Haidt takes this ambitious analysis of philosophical thought over the centuries and examines it through the prism of modern psychology research to extract a remarkably compelling blueprint for optimizing the human condition for happiness. Do you feel a pang of guilt when you decline a dinner party invitation in favor of a good book and a cup of tea? Share on Tumblr

Noam Chomsky on America's Economic Suicide | Economy May 4, 2012 | Like this article? Join our email list: Stay up to date with the latest headlines via email. Noam Chomsky has not just been watching the Occupy movement. From his speeches, and in this conversation, it’s clear that the emeritus MIT professor and author is as impressed by the spontaneous, cooperative communities some Occupy encampments created, as he is by the movement’s political impact. We’re a nation whose leaders are pursuing policies that amount to economic “suicide” Chomsky says. We talked in his office, for Free Speech TV on April 24. LF: Let’s start with the big picture. NC: There is either a crisis or a return to the norm of stagnation. The US and Europe are committing suicide in different ways. LF: And politically…? NC: Again there are differences. In the US, first of all, the electoral system has been almost totally shredded. The Republican Party has pretty much abandoned any pretense of being a traditional political party.

It's me, Jesus! This was during my audition for The Lion King. I didn’t get the part. braiker: thanks again, internet A portrait with my dear friend, Bob Ross. Fear not children for he is with me now. I shall always look after my sheep. My newest attempts to convert my children that follow a more revolutionary path. My classic mosaic has been restored. One of my followers has gotten a beautiful tattoo of me on his back. Me as a child.

Everything is a Remix Part 4: System Failure by Maria Popova A brief history of intellectual property, or why 1790 was more culturally progressive than 2012. For the past year, Kirby Ferguson has been tracing the history and evolution of remix culture in his fantastic ongoing series Everything Is A Remix, with each episode tackling a different facet of collaborative creation. From the origin of “intellectual property,” which suddenly transformed shared ideas into owned artifacts, to the psychological paradoxes of how we justify doing the copying but resent being copied, to the dirty business of opportunistic litigation, the film explores the aberrations of copyright and reminds us that the original Copyright Act of 1790 was entitled “An Act for the encouragement of learning” and the Patent Act of the same year was “An Act to promote the progress of the useful Arts,” upholding an ideal of a rich public domain with shared knowledge open to everyone. Our system of law doesn’t acknowledge the derivative nature of creativity.