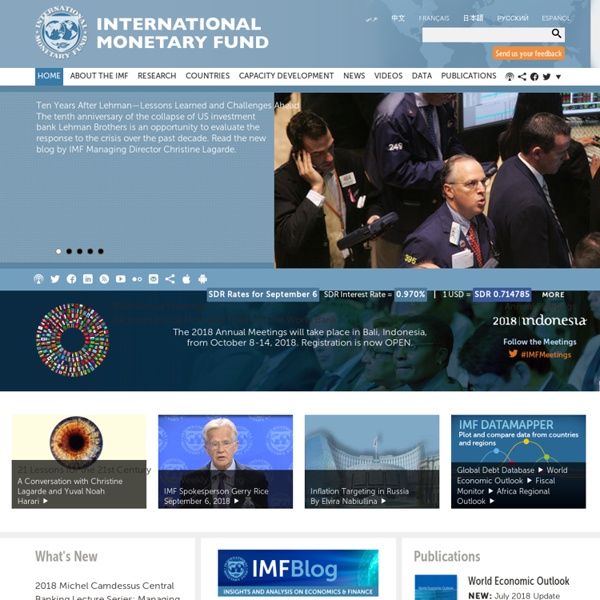 About ​The International Criminal Court (ICC) investigates and, where warranted, tries individuals charged with the gravest crimes of concern to the international community: genocide, war crimes, crimes against humanity and the crime of aggression. "This cause … is the cause of all humanity​" Former United Nations Secretary-General Kofi Annan​ The Court is participating in a global fight to end impunity, and through international criminal justice, the Court aims to hold those responsible accountable for their crimes and to help prevent these crimes from happening again.

Global Governance Global governance or world governance is a social movement toward political integration of transnational actors aimed at solving problems that affect more than one state or region when there is no power of enforcing compliance. The modern question of world governance exists in the context of globalization. In response to the acceleration of interdependence on a worldwide scale, both between human societies and between humankind and the biosphere, the term "world governance" may also be used to designate laws, rules, or regulations intended for a global scale. We've yet to kill off the Washington consensus If the Washington consensus policies are truly dead, then in addition to calling for more overseas aid to meet the millennium development goals (MDGs), readers of this blog should also tell their governments to stop having their representatives on the executive boards of the International Monetary Fund (IMF) and World Bank regularly approve loans with conditions that keep the consensus alive. Over the last few years, we have heard various claims about the state of Washington consensus policies (fiscal discipline, cutting tax rates, interest rate liberalisation, competitive exchange rates, trade liberalisation, liberalisation of capital flows, privatisation and deregulation of prices and markets). We've been told that the policies have been "damaged", but are still essentially sound, and discredited, and that now we are living in post-Washington consensus world. Others, however, have rightly questioned if a real break with the past is truly at hand.

Print and Broadcast Media From Wikipedia, the free encyclopedia Media may refer to: Communications[edit] Computing[edit] Fine art[edit] Life sciences[edit] What Goes Around, Comes Around: the eurozone crisis, the BRICS and the IMF Ilene Grabel From 1980s through the early 2000s developing countries faced repeated demands to get their financial houses in order as a condition of financial assistance from the international financial institutions (IFIs) and the world’s leading economies. The Washington Consensus codified the standard conditionality. It tied financial rescue on all manner of draconian policies that were designed to ensure that developing country governments could meet obligations to their international creditors. In pursuit of solvency, few public sector expenditures were exempt from the neoliberal axe. Social welfare spending was slashed, taxes on all but the wealthy and large firms were raised, markets were liberalized, enterprises were sold off to the presumably more efficient private sector (though often the “private sector” were domestic elites with privileged access to the assets at bargain prices), and barriers to international trade and financial flows were rescinded.

IMF Direction of Trade Statistics dataset guide The Direction of Trade Statistics (DOTS) database contains data on the value of merchandise exports and imports between each country and all its trading partners. Total bilateral and multilateral exports and imports are aggregated at national or regional group level. For each reporting country or group, all the trading partners are listed. The corresponding monetary values of total imports and total exports are then provided as time series for each country/trading partner pair. political science Geopolitics, analysis of the geographic influences on power relationships in international relations. The word geopolitics was originally coined by the Swedish political scientist Rudolf Kjellén about the turn of the 20th century, and its use spread throughout Europe in the period between World Wars I and II (1918–39) and came into worldwide use during the latter. In contemporary discourse, geopolitics has been widely employed as a loose synonym for international politics. Arguments about the political effects of geography—particularly climate, topography, arable land, and access to the sea—have appeared in Western political thought since at least the ancient Greek era and were prominent in the writings of philosophers as diverse as Aristotle (384–322 bc) and Montesquieu (1689–1745). Mahan’s historical analysis of the rise of the British Empire was the starting point for the geopolitical debate. Daniel H.

Money, Power and Wall Street Did the Fed’s Emergency Lending Prop Up “Too Big to Fail”? May 1, 2012, 8:44 pm ET · by Azmat Khan The Obama administration arrived in Washington in early 2009 facing the worst financial crisis since the Great Depression — and an American public outraged by bailouts for the financial institutions that had gotten them there. Pioneer Behind Credit Derivatives is Leaving JPMorgan April 3, 2014, 4:16 pm ET · by Jason M. Breslow Chaos Theory and Complexity Theory A double rod pendulum animation showing chaotic behavior. Starting the pendulum from a slightly different initial condition would result in a completely different trajectory. The double rod pendulum is one of the simplest dynamical systems that has chaotic solutions. Chaos: When the present determines the future, but the approximate present does not approximately determine the future.

IMF official admits: austerity is harming Greece A leading architect of the austerity programme in Greece – one of the harshest ever seen in Europe – has admitted that its emphasis on fiscal consolidation has failed to work, and said economic recovery will only come if the crisis-hit country changes tack and focuses on structural reforms. Poul Thomsen, a senior International Monetary Fund official who oversees the organisation's mission in Greece, also insists that, contrary to popular belief, Athens has achieved a lot since the eruption of the debt crisis in December 2009. "We will have to slow down a little as far as fiscal adjustment is concerned and move faster – much faster – with the reforms needed to modernise the economy," he told the Greek daily Kathimerini, adding that the policy shift would be "reflected" in the conditions foreign lenders attached to a new rescue programme for Athens. The Greek economy is projected to contract by over 5% this year; GDP has fallen almost 16% over the past three years.

The International Monetary Fund (IMF) is an organisation of 187 countries that works to foster global monetary cooperation, secure financial stability, facilitate international trade, promote high employment and sustainable economic growth, and reduce poverty. As of March 2011, the IMF had $111.8 billion in loans outstanding to 87 countries. Of this, $7.7 billion was on concessional terms to 65 countries. by jerry_jenkins Dec 13