Male mental health: Why we need to build a more open culture. Only 36% of mental health referrals come from men, so many miss out on supportShutterstock Data shows that men are less likely to access support for mental health issues, yet they are statistically more likely to take their own lives. 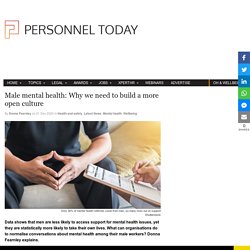 What can organisations do to normalise conversations about mental health among their male workers? Donna Fearnley explains. We’re all familiar with the shocking stats surrounding mental health, but how many of us know how it affects men specifically? Statistically, three times more men will take their own life than women, and suicide remains the biggest cause of death for men under 50. One in six British workers will experience depression, anxiety or problems relating to stress at any one time – but men are a lot less likely to access psychological therapies than women. Addressing this is one of the biggest challenges we face, not just in our personal lives, but in our workplaces, too. Meaningful communications The personal touch A fresh perspective. Health Disparities: Why Do Girls Live Longer Than Boys?

Dear Healthy Men: A few weeks ago, you wrote about why women live longer than women. 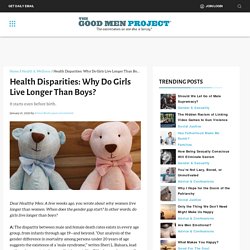 When does the gender gap start? In other words, do girls live longer than boys? A: The disparity between male and female death rates exists in every age group, from infants through age 19—and beyond. The epidemic — and consequences — of male loneliness. Loneliness kills. 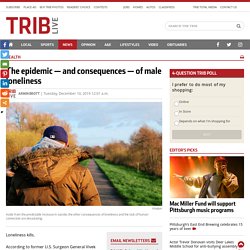 According to former U.S. Men’s Stress Increases If Wife Earns More Than 40% of Household Income. Healthy Men: Is there really a men's health crisis? - Chicago Tribune. We Can Help Men Live Longer. If this doesn’t sound like medical care to you, then you are a well-acculturated American. 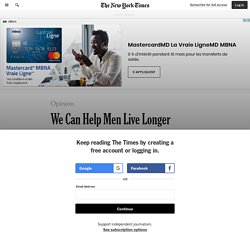 Our health system has led us to believe that medical care and health care are interchangeable terms. They are not. In the United States, we have a medical system but we lack a system that cares for our health. Lower sperm counts don’t mean the reproductive apocalypse — yet. University of WashingtonSchool of MedicineIt’s not just a sci-fi scenario in The Handmaid’s Tale: Actual scientists are worrying about a coming reproductive apocalypse. 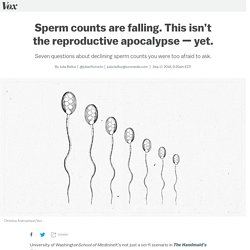 You heard me right. Over the past 30 years, as concerns that environmental changes are harming our reproductive capacity have grown, scientific journal articles have trickled out that look at whether sperm counts are declining. But those studies were often riddled with flaws and limitations, and scientists couldn’t agree on how to interpret them. Then came what’s now considered the most definitive study on the question, published in the journal Human Reproduction Update in 2017. Single fathers have alarmingly high mortality rates.

For better or for worse, the traditional family unit has changed a lot since the 1960s. 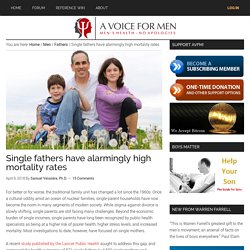 Once a cultural oddity amid an ocean of nuclear families, single-parent households have now become the norm in many segments of modern society. While stigma against divorce is slowly shifting, single parents are still facing many challenges. Postpartum Depression Can Affect Dads. The following essay is reprinted with permission from The Conversation, an online publication covering the latest research. 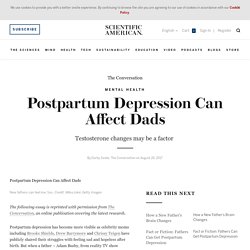 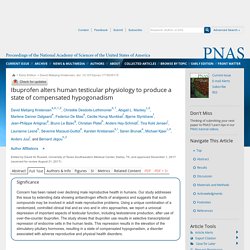 Russell, University of Texas Southwestern Medical Center, Dallas, TX, and approved December 1, 2017 (received for review August 31, 2017) Significance Concern has been raised over declining male reproductive health in humans. Our study addresses this issue by extending data showing antiandrogen effects of analgesics and suggests that such compounds may be involved in adult male reproductive problems. Abstract Concern has been raised over increased male reproductive disorders in the Western world, and the disruption of male endocrinology has been suggested to play a central role. Study: Ibuprofen can affect men’s fertility. WASHINGTON — A new study finds that ibuprofen can affect men’s testicular function and fertility. 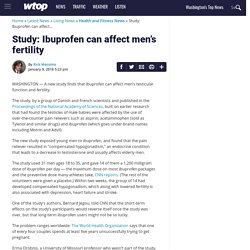 The study, by a group of Danish and French scientists and published in the Proceedings of the National Academy of Sciences, built on earlier research that had found the testicles of male babies were affected by the use of over-the-counter pain relievers such as aspirin, acetaminophen (sold as Tylenol and similar drugs) and ibuprofen (which goes under brand names including Motrin and Advil). The new study exposed young men to ibuprofen, and found that the pain reliever resulted in “compensated hypogonadism,” an endocrine condition that leads to a decrease in testosterone and usually affects elderly men. The study used 31 men ages 18 to 35, and gave 14 of them a 1,200 milligram dose of ibuprofen per day — the maximum dose on most ibuprofen packages and the preventive dose many athletes take, CNN reports. 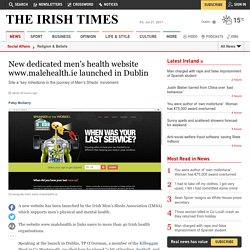 The website www.malehealth.ie links users to more than 40 Irish health organisations. Speaking at the launch in Dublin, TP O’Gorman, a member of the Kilbeggan Shed in Co Westmeath, recalled how he played “a bit of hurling, football, and soccer, but then missed the camaraderie of sport” as he grew older. “I found it in the Shed again.” It was not just “good for the men but it is to their families’ benefit as well”, he said. “If laughter is the best medicine then we’re on high doses of it.” Explaining The Rising Death Rate In Middle-Aged White People. In 2015, when researchers Ann Case and Angus Deaton discovered that death rates had been rising dramatically since 1999 among middle-aged white Americans, they weren't sure why people were dying younger, reversing decades of longer life expectancy.

Now the husband-and-wife economists say they have a better understanding of what's causing these "deaths of despair" by suicide, drugs and alcohol. In a follow-up to their groundbreaking 2015 work, they say that a lack of steady, well-paying jobs for whites without college degrees has caused pain, distress and social dysfunction to build up over time. The mortality rate for that group, ages 45 to 54, increased by a half-percent each year from 1999 to 2013. But whites with college degrees haven't suffered the same lack of economic opportunity, and haven't seen the same loss of life expectancy. The study was published Thursday in Brookings Papers on Economic Activity. Interview Highlights. Gender empathy gap BPS SW Review Barry Winter 2016 author copy.

There's a Problem With Mental Health Treatment - And It's Killing Men. A new report that shows depressed men are turning not to their GPs for help, but to “quick fixes” like porn, sex and video games was always going to be clickbait gold. So it proved this week, when Britain’s best-selling newspapers feasted on titillating findings from the British Psychological Society conference in Liverpool. The report, “Sex Difference in Preferences for Psychological Treatment, Coping Strategies, & Triggers to Help-seeking” highlighted that 27% of stressed men turned to sex and pornography to help them cope, compared to 11% of women. In contrast, 51% of depressed women comfort ate. November's mustache movement raises awareness for men's health.

HOUSTON - Talking about men’s health can be a bit taboo, so instead, this story is about your nose neighbor. The Today Show’s Matt Lauer and Al Roker are rocking crumb catchers. Houston Life’s Derrick Shore has a kiss tickler. The grass grin is showing up everywhere. “For me, it sparks a conversation because I don’t typically have facial hair,” says Dr. Alfred Mansour, an orthopedic surgeon at Memorial Hermann IRONMAN Sports Medicine Institute and UTHealth. The Rules Men Live by are Killing them.

Get elephant's newsletter Dear Women: Suicide is killing our men. I have been aware of the statistics for sometime now. In Australia it’s the biggest killer of men under the age of 45. That is a horrifying statistic, almost too much to believe. It tops heart disease, cancer, road accidents, and it brings to light a vital problem in our society: Men don’t feel like they can talk about their problems and reach out for help. Suicidal ideation among individuals whose parents have divorced: findings from a representative Canadian community survey.