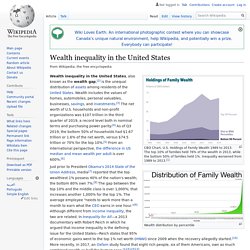 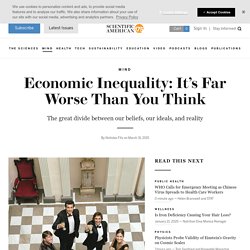 If poor people knew how rich rich people are, there would be riots in the streets. " The findings of three studies, published over the last several years in Perspectives on Psychological Science, suggest that Rock is right. We have no idea how unequal our society has become. In their 2011 paper, Michael Norton and Dan Ariely analyzed beliefs about wealth inequality. They asked more than 5,000 Americans to guess the percentage of wealth (i.e., savings, property, stocks, etc., minus debts) owned by each fifth of the population. The average American believes that the richest fifth own 59% of the wealth and that the bottom 40% own 9%. We don’t want to live like this. This all might ring a bell. In a study published last year, Norton and Sorapop Kiatpongsan used a similar approach to assess perceptions of income inequality.

Sign up for Scientific American’s free newsletters. Stephen Hawking: You Should Support Wealth Redistribution. In July, Professor Stephen Hawking took the time to answer questions posed by Reddit users in an AMA (Ask Me Antyhing), addressing one of the less discussed aspect of increasing technology and robotization: the distribution of wealth. 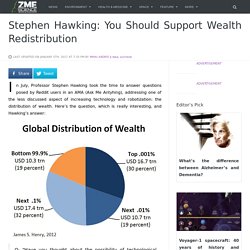 Here’s the question, which is really interesting, and Hawking’s answer: Q: “Have you thought about the possibility of technological unemployment, where we develop automated processes that ultimately cause large unemployment by performing jobs faster and/or cheaper than people can perform them? Some compare this thought to the thoughts of the Luddites, whose revolt was caused in part by perceived technological unemployment over 100 years ago.

In particular, do you foresee a world where people work less because so much work is automated? Do you think people will always either find work or manufacture more work to be done?” Answer: A: If machines produce everything we need, the outcome will depend on how things are distributed. Image via Flickr. Nick Hanauer: Beware, fellow plutocrats, the pitchforks are coming. Richard Wilkinson: How economic inequality harms societies. Britain inequality. New TUC report shows average FTSE 100 director now earns a year's full time minimum wage salary every day. The TUC have today published a report into the pay of FTSE 100 company directors. 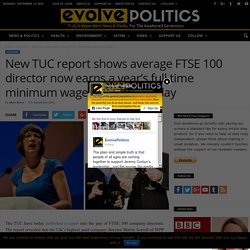 The report revealed that the UK’s highest paid company director Martin Sorrell of WPP – the world’s largest advertiser – was paid an eye-watering £70 million in 2015 – around 2,500 times the average workers salary, and equating to over £38,000 an hour. The average earnings (not including pension schemes) of the FTSE 100 company directors has increased by 47% in the five years, and now stands at £3.4 million. This is in stark contrast to the wages of their workers which have stagnated, and in real-terms trail their pre-2008 levels.

In 2010 the average FTSE 100 director was paid 89 times more than the average full-time worker. By 2015 director pay had risen to an astonishing 123 times that over the average wage. Comparisons with minimum wage pay is even more shocking. News of five years of austerity, cutbacks and pay restraint, does not appear to have reached the boardroom. Like this: Like Loading... Comments. Economic inequality. Differences in national income equality around the world as measured by the national Gini coefficient. 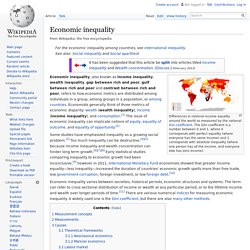 The Gini coefficient is a number between 0 and 1, where 0 corresponds with perfect equality (where everyone has the same income) and 1 corresponds with absolute inequality (where one person has all the income, and everyone else has zero income). Some studies have emphasized inequality as a growing social problem.[3] Too much inequality can be destructive,[4][5] because income inequality and wealth concentration can hinder long term growth.[6][7][8] Early statistical studies comparing inequality to economic growth had been inconclusive,[9] however in 2011, International Monetary Fund economists showed that greater income equality—less inequality—increased the duration of countries' economic growth spells more than free trade, low government corruption, foreign investment, or low foreign debt.[10] Measurement concepts[edit] Data can be based on joint taxation of couples (e.g. Where are you on the global pay scale? List of countries by income equality.

This is a list of countries or dependencies by income inequality metrics, including Gini coefficients. 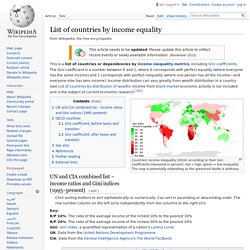 Income from black market economic activity is not included and is the subject of current economic research.[1][2] Countries' income inequality (2014) according to their Gini coefficients measured in percent: red = high, green = low inequality. The map is potentially misleading as the green/red divide is arbitrary. UN and CIA combined list – income ratios and Gini indices (1995–present)[edit] Click sorting buttons to sort alphabetically or numerically. OECD countries[edit] Gini coefficient, before taxes and transfers[edit] 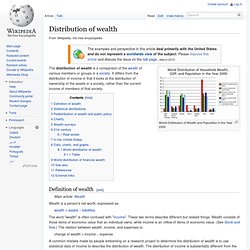 It differs from the distribution of income in that it looks at the distribution of ownership of the assets in a society, rather than the current income of members of that society. Definition of wealth[edit] Wealth is a person's net worth, expressed as: GLOBAL DISTRIBUTION.