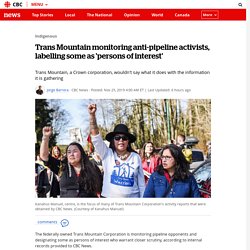 The Trans Mountain documents show its security officials recorded the names of individuals who posted anti-pipeline videos and statements on social media, along with the names of those tagged in the posts or who shared the content. Baroness von Sketch Show. Indigenous, 2-spirit couple from Alberta wins The Amazing Race Canada. Anthony Johnson and James Makokis hoped being the first Indigenous, two-spirit couple to compete on The Amazing Race Canada would give them a national platform to highlight issues close to their hearts. 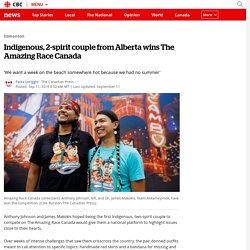 Over weeks of intense challenges that saw them crisscross the country, the pair donned outfits meant to call attention to specific topics: handmade red skirts and a bandana for missing and murdered Indigenous women and girls, blue shirts emblazoned with "Water Is Life" to show the cultural and ceremonial importance of water. Settlements between Ottawa and 9 Sask. First Nations, for missed 1880s $5 treaty payments, total $38.5M. Settlements between the Government of Canada and nine First Nations in Saskatchewan announced this week, made for past damages, are valued at a combined total of more than $38.5 million. 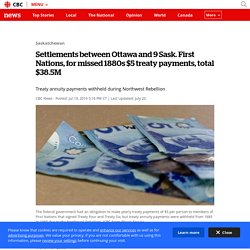 The agreements with the Treaty 6 and Treaty 4 communities are to make amends for $5-per-person annual payments, promised in the treaties, that were withheld from 1885 and 1888 due to the Northwest Rebellion. Minister of Crown-Indigenous Relations Carolyn Bennett was in North Battleford to mark the settlements this week. She said the money will help the First Nations with economic growth and that settling claims is a key step toward healing and reconciliation. Bear Clan: a model of indigenous activism that's swept across Canada.

In a small room in a Winnipeg community centre, dozens of volunteers strap on bright yellow vests and ready themselves for night patrol. 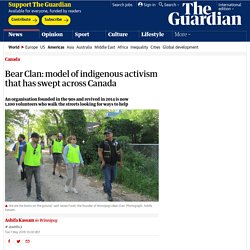 Some will pick up syringes along the way, others will hand out fresh fruit and water – all under the banner of protecting the city’s most vulnerable. “We are the boots on the ground,” said James Favel, the founder of Winnipeg’s Bear Clan. “We are the direct action that our nation has been crying for for decades.” From Maori to Inuktitut: how a therapy game is helping Indigenous youth. In isolated or remote places, mental health support can be difficult to find. 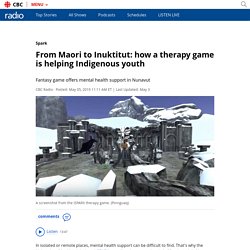 That's why the University of Auckland designed SPARX, an online therapy tool, to help Maori youth in New Zealand deal with depression or anxiety. SPARX was shown to be an effective tool for mental health, and here in Canada that caught the attention of Yvonne Bohr. She's an associate professor of clinical developmental psychology at York University and a member of the LaMarsh Centre for Child and Youth Research at York. Yvonne Bohr (Horst Herget Photography) At the time Yvonne was part of a team of researchers helping the government of Nunavut find similar technology-based mental health tools for youth. 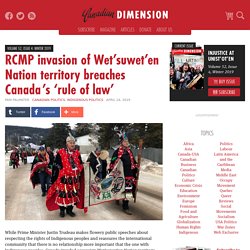 When questioned about this aggressive move at a Liberal fundraiser in Kamloops, British Columbia, he responded: “No, obviously, it’s not an ideal situation… But at the same time, we’re also a country of the rule of law.” Canada’s invasion of Wet’suwet’en territory through its national police force, the Royal Canadian Mounted Police (RCMP), is an example of the blatant violation of the rule of law in favour of corporate interests.

First Nation sues for title to massive, scenic swath of Ontario and $90B as landmark trial starts. TORONTO — A massive Aboriginal claim over some of the most picturesque geography in Ontario triggered a landmark trial Thursday, with a large contingent of lawyers politely starting a delicate dance over contentious issues of land, treaty rights and money. 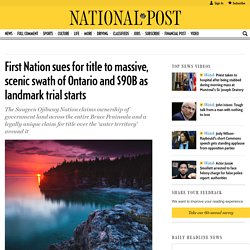 The Saugeen Ojibway Nation is pressing a claim to ownership of government land across the entire Bruce Peninsula and a legally unique claim for Aboriginal title over the “water territory” around it — stretching from the international boundary with the United States in Lake Huron across to Georgian Bay — along with compensation that could amount, by their accounting, to $90 billion. A passel of more than 20 lawyers hauled suitcases and boxes filled with paperwork into court; laptops were connected to projection screens and huge maps unfurled as dozens of observers gathered in a stately courthouse in downtown Toronto. The lawsuit makes three primary claims. Ontario remains committed to reconciliation. Natan Obed Calls Out Media For Asking SNC-Lavalin Questions After Inuit Apology. OTTAWA — National Inuit leader Natan Obed urged reporters to read the room Friday after they pressed the prime minister about the SNC-Lavalin affair on a solemn day in Iqaluit. 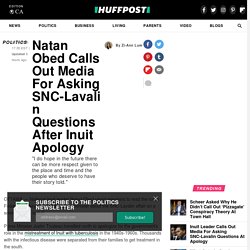 Prime Minister Justin Trudeau travelled north to apologize for the government's role in the mistreatment of Inuit with tuberculosis in the 1940s-1960s. Thousands with the infectious disease were separated from their families to get treatment in the south. Many died along the way or during lengthy hospital stays. Families were left in the dark about what happened to relatives and friends because of inadequate records. Indigenous women coerced into sterilizations across Canada: senator. OTTAWA—When she was 17 years old, Liz was coerced by a Children’s Aid worker into having an abortion and being sterilized at a northwestern Ontario hospital, she says — an experience she’s carried for 40 years. 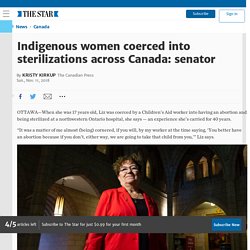 “It was a matter of me almost (being) cornered, if you will, by my worker at the time saying, ‘You better have an abortion because if you don’t, either way, we are going to take that child from you,’” Liz says. New research shows the forced sterilization of Indigenous women is not just a shameful part of Canadian history. Reports from Alberta, Saskatchewan, Manitoba, Ontario and the territories suggest it is still happening.

Courchene: Here’s why acknowledging Indigenous territories matters. Authors band together to fight threatened Indigenous curriculum in Ontario. Cherie Dimaline is donating copies of her bestseller The Marrow Thieves to Ontario public schools Canadian Indigenous authors are standing up to Ontario’s Ministry of Education. 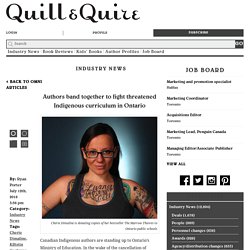 In the wake of the cancellation of sessions to update how Indigenous issues are taught in the public-school curriculum, writers Cherie Dimaline, Monique Gray Smith, and Tracey Lindberg have pledged to donate their books to classrooms. “I have exactly 20 copies of The Marrow Thieves in my house,” Dimaline wrote on Twitter. Art, representation and the importance of seeing yourself reflected in popular culture. Whether it's through comic books, music, or literature, Indigenous artists are finding their voice. This week on Unreserved, how Indigenous artists are reinforcing the presence of their own stories and characters in creative fields where they have often been left out.

But now the band is also helping more Inuit musicians in the North. Two years ago, they created Aakuluk Music, Nunavut's very first record label. Andrew Morrison from the Jerry Cans said they started the label because they found it very challenging to navigate the music industry from Iqaluit. "Because we sing in Inuktitut we often heard no from a lot of music industry people," he said. "We were playing across Canada, people were interested in what we were doing. Internal Server Error. Battlefords-Lloydminster MP Rosemarie Falk is being criticized for high-fiving fellow MP Dane Lloyd, who represents the Alberta riding of Sturgeon River-Parkland, after voting against a bill supporting Indigenous rights last week. Bill C-262, aimed at ensuring Canada's laws are in harmony with the United Nations Declaration on the Rights of Indigenous Peoples, was passed on May 30.

The private member's bill, introduced by New Democrat MP and reconciliation critic Romeo Saganash, won the support of MPs by a margin of 206 to 79 and is now en route to the Senate. All 79 votes against the bill were from Conservative MPs. After voting against the bill, Falk and Lloyd could be seen high-fiving each other in the House of Commons. That drew criticism on social media, including condemnation from Assembly of First Nations National Chief Perry Bellegarde. "For two elected Members of Parliament … to behave so disrespectfully on a matter of basic human rights is absolutely beyond the pale. " Why Ian Campeau Had To Leave A Tribe Called Red. Lifespan of Indigenous people 15 years shorter than that of other Canadians, federal documents say - Health. Federal briefing documents on the new Indigenous Services Department say Indigenous people in Canada don't live as long, are more likely to end up in the child welfare system and are less likely to graduate high school.

On Tuesday, Indigenous Services Minister Jane Philpott laid out the structure and goals of the new department, which is supposed to improve the quality of life and help move away from the top-down approach where Ottawa dictates all that happens in the file. Philpott's briefing documents show the difficult job ahead for her new department, with life expectancy for Indigenous people 15 years shorter than other Canadians, infant mortality rates two to three times higher and incidence of diseases such as diabetes four times the rate in non-Indigenous populations.

Liberals stick to First Nations water promise Later this week, she is hosting an emergency meeting on child welfare on reserves, which she says is the most pressing issue for her new department. Amnesty International Welcomes Commitment by Minister Wilson-Raybould to Support Bill C-262. Amnesty International welcomes the commitment by Justice Minister Jody Wilson-Raybould on Monday to support Private Member’s Bill C-262 toward implementation of the UN Declaration on the Rights of Indigenous Peoples. “Proud Boys” reassigned to new military jobs as their case moves through Canadian Forces system. Inuit Elder taken into custody after defying Muskrat Falls injunction - APTN NewsAPTN News. Here’s How Indigenous People Are Resisting, Not Celebrating, Canada 150. 'In its rightful place': Teepee moved from far corner of Hill nearer to Peace Tower - Ottawa.

With both chambers rising for summer, Bill S-3, the government’s answer to a court decision that highlighted sex-based inequities in the Indian Act, will not be able to pass into law before a July 3 deadline. That’s because the Senate decided to essentially ignore the House’s wishes Thursday morning. Looking white and being Aboriginal - Newfoundland & Labrador. Trudeau to drop name of residential schools proponent from Langevin building. Prime Minister Justin Trudeau marked National Aboriginal Day by promising to strip the name of a residential schools proponent from a federal building and to rename the annual occasion as National Indigenous Peoples Day. Trudeau also formally announced that 100 Wellington St. in Ottawa, a heritage building and former U.S. embassy, will become a space dedicated to Inuit, Métis and First Nations peoples. During an event outside the building located across from Parliament Hill, Trudeau said there has never been a space dedicated to Indigenous peoples in the parliamentary precinct.

Indigenous communities in Canada finally on Google Maps - Manitoba. Selling Off Sacred Algonquin Land For Condos Not 'Reconciliation'  The Canada most people don’t hear. Community, Education and Decolonization for Canada’s 150th. Indigenous women and science knowledge: The first voice and climate change. 21 things you may not know about the Indian Act - CBC News. Indigenous kids made up almost half of Canadian foster children in 2011: Statscan. Canada 150: Many Indigenous People Wonder What's Worth Celebrating.

The NDP’s Other Leadership Race.