The Only Realistic Way to Fix Campaign Finance. Photo CAMBRIDGE, Mass. — FOR the first time in modern history, the leading issue concerning voters in the upcoming presidential election, according to a recent Wall Street Journal/NBC News poll, is that “wealthy individuals and corporations will have too much influence over who wins.” 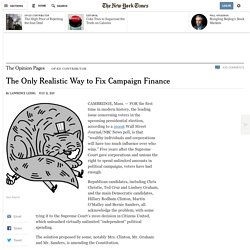 Five years after the Supreme Court gave corporations and unions the right to spend unlimited amounts in political campaigns, voters have had enough. The Only Realistic Way to Fix Campaign Finance. The Real Super Bowl Question: Should The NFL Be A Nonprofit? His First 4 Sentences Are Interesting. The 5th Blew My Mind. And Made Me A Little Sick. Buycott App.

The One Comic That Explains Just How Screwed America Is. What's Happening With the Chicago Teacher Strike, Explained. More than 350,000 kids in the Chicago Public School district got to sleep in on Monday because their teachers were up early striking for better benefits, job security, evaluations, and training. The Chicago Teachers Union has been in contract negotiations with Chicago Public Schools since November 2011, but this is the first actual teachers' strike to hit the Windy City in 25 years .

There have been other teacher strikes this year in Oregon and Pennsylvania , but this latest movement has sparked a fierce debate about national education reform, raising questions about America's emphasis on standardized testing. It has also pit public schools against charter schools, which are often nonunionized and "tend to favor rookie teachers who are younger and far less likely to be minorities," according to the . Mission impossible for the Democrats? Democrats are being lured into a battle they cannot win. 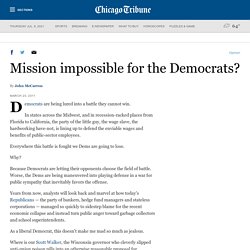 In states across the Midwest, and in recession-racked places from Florida to California, the party of the little guy, the wage slave, the hardworking have-not, is lining up to defend the enviable wages and benefits of public-sector employees. Everywhere this battle is fought we Dems are going to lose. Why? Because Democrats are letting their opponents choose the field of battle. 5 Things You Never Knew About Microfinancing. The following is an excerpt from “Confessions of a Microfinance Heretic” by Hugh Sinclair. 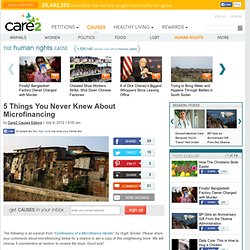 Please share your comments about microfinancing below for a chance to win a copy of this enlightening book. We will choose 5 commenters at random to receive the book. Good luck! Faceoff: Occupy Wall Street vs. Tea Party Movement (Infographic) America's 10 Most Overpaid CEOs. Octopi Wall Street! OWS Fact Sheet 09/30/2011. #OccupyWallStreet Is a Church of Dissent, Not a Protest. September 29th, 2011 6:07 PM By Matt Stoller Last weekend, I spent a few days with the protesters downtown near Wall Street, and it was an eye-opening experience. 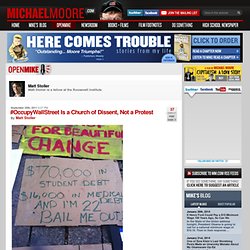 The people there want something, but it’s not a list of demands, and it is entirely overlooked by the media and most commentators on the protest. If all you read are news stories and twitter feeds about #OccupyWallStreet, the most trenchant imagery that will stick in your mind is that of police brutality, and the politics of Wall Street greed. The debate seems to be organized around whether the protest will be “successful” or not, how the protesters are stupid or a new American Tahrir Square, or rhetoric designed in a media sphere that maximizes attention. And it’s obvious that this isn’t just about Wall Street, nor is it really a battle of any sort. What these people are doing is building, for lack of a better word, a church of dissent. Meaning is a fundamental human need. The organizers themselves seem quite experienced. We Are the 99 Percent. 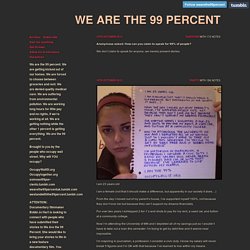 We don’t claim to speak for anyone, we merely present stories. 14th October 2013 Photo with 186 notes I am 23 years old I am a female (not that it should make a difference, but apparently in our society it does…) From the day I moved out of my parent’s house, I’ve supported myself 100%, not because they don’t love me but because they can’t support my dreams financially. For over two years I schlepped 2-for-1’s and shots to pay for my rent, a used car, and tuition at a community college.

Now I’m attending the University of MN and I depleted all of my savings just so I wouldn’t have to take out a loan this semester. It's the Inequality, Stupid. Want more charts like these? 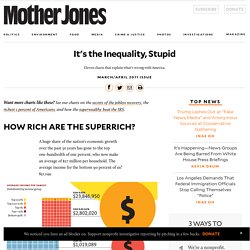 See our charts on the secrets of the jobless recovery, the richest 1 percent of Americans, and how the superwealthy beat the IRS. How Rich Are the Superrich? A huge share of the nation's economic growth over the past 30 years has gone to the top one-hundredth of one percent, who now make an average of $27 million per household. The average income for the bottom 90 percent of us? $31,244.