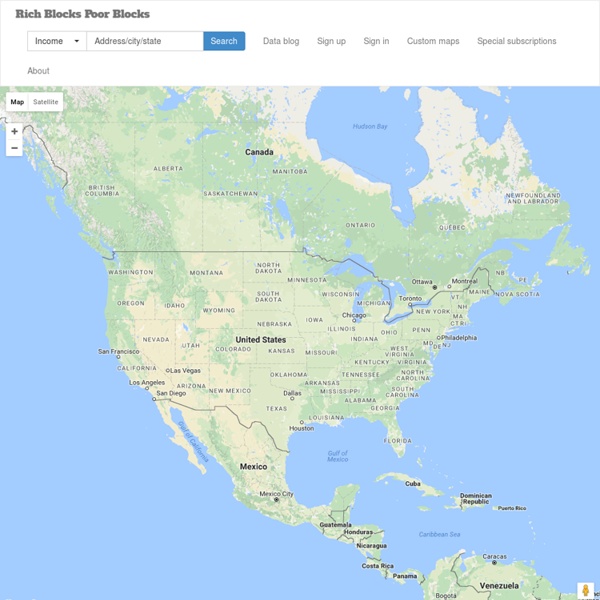 Fast Company: "See where the money lives -- and where it doesn't -- in your city" No matter where you live, you probably already have some sort of mental map of where the money resides in your city. It’s one of those data sets you subconsciously start collecting the moment you move somewhere. At first, it’s something you sense in only the broadest geographic terms--understanding that the north side of the city is generally poorer than the rest of it, say--but with time and experience, the map becomes more refined, filled in on the level of neighborhood and street. How well do these perceptions of income line up with reality? That’s what this website shows us.

OpenStreetMap Where is this? Reverse Directions Welcome to OpenStreetMap! OpenStreetMap is a map of the world, created by people like you and free to use under an open license. Hosting is supported by UCL, Bytemark Hosting, and other partners. Learn More Start Mapping Framework & Handbook - prosuite.org The figure below shows a schematic representation of the new PROSUITE Sustainability Assessment Framework. It is followed by a description of the 5 major impact categories. Impact on human health: The impacts on human health of a new technology include all changes in morbidity and mortality that are caused by the introduction of new technologies, through all possible pathways, including environmental, occupational and as consumer. These can be quantified using the ‘DALY-concept’ (Disability Adjusted Life Years).

The Part-Time Employment Ratio: Up Slightly in March Let's take a close look at Friday's employment report numbers on Full and Part-Time Employment. Buried near the bottom of Table A-9 of the government's Employment Situation Summary are the numbers for Full- and Part-Time Workers, with 35-or-more hours as the arbitrary divide between the two categories. The Labor Department has been collecting this since 1968, a time when only 13.5% of US employees were part-timers. 1 - 20 of 10934 from the Library of Congress ↓ Refine your search Map of the Iowa Central Air Line Rail Road and its connections. Scale ca. 1:1,550,000. Entered according to act of Congress in the year 1857.

ImagePlot visualization software: explore patterns in large image collections What is ImagePlot? ImagePlot is a free software tool that visualizes collections of images and video of any size. It is implemented as a macro which works with the open source image processing program ImageJ. New State Rankings Reveal Top 10 Highest and Lowest Well-Being States New state rankings from the Gallup-Healthways Well-Being Index® show that, over the seven years that we have been measuring and analyzing well-being, a number of U.S. states have made repeat appearances in the top ten list. Hawaii, which is ranked second this year, and Colorado, which is ranked sixth this year, have made consistent appearances in the top ten list all seven years. Marking its fourth appearance since 2008 on the top ten list, Alaska secured the number one spot for the very first time. Familiar states also appear among the lowest well-being states. For the sixth consecutive year, West Virginia and Kentucky have the lowest well-being in the United States, ranking 50th and 49th, respectively. Other states that have appeared in the bottom ten all seven years are Arkansas, Ohio and Mississippi.

History of U.S. Military Interventions since 1890 by Dr. Zoltan Grossman The following is a partial list of U.S. military interventions from 1890 to 2014.