What caused the French Revolution? - Tom Mullaney. The Demolition of Workers’ Compensation. Dennis Whedbee’s crew was rushing to prepare an oil well for pumping on the Sweet Grass Woman lease site, a speck of dusty plains rich with crude in Mandaree, North Dakota. 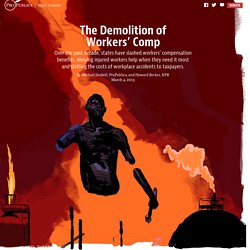 It was getting late that September afternoon in 2012. Whedbee, a 50-year-old derrickhand, was helping another worker remove a pipe fitting on top of the well when it suddenly blew. Oil and sludge pressurized at more than 700 pounds per square inch tore into Whedbee’s body, ripping his left arm off just below the elbow. Coworkers jerry-rigged a tourniquet from a sweatshirt and a ratchet strap to stanch his bleeding and got his wife on the phone. “Babe,’’ he said, “tell everyone I love them.” It was exactly the sort of accident that workers’ compensation was designed for. No longer. NewYork 10 FrenchRevolution. What caused the French Revolution? - Tom Mullaney. We view these events at a distance of more than two hundred years. 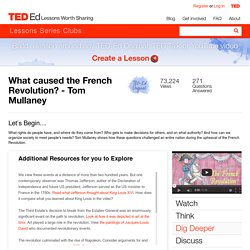 But one contemporary observer was Thomas Jefferson, author of the Declaration of Independence and future US president. Youtube. French%20Revolution%20Game%20@%20Tina%27s%20Dynamic%20Homeschool%20Plus. ***Note for the article about water. In California, Stingy Water Users Are Fined in Drought, While the Rich Soak. Why Occupy Wall Street fizzled - Sep. 17, 2013. What Happened to Occupy Wall Street? On her first campaign stop in Iowa in April, Hillary Clinton struck a decisively populist tone, declaring that “the deck is still stacked in favor of those at the top.” 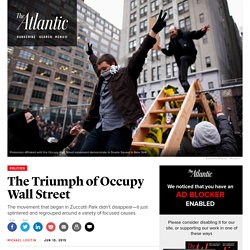 Later, she sharpened her rhetoric on income inequality by comparing the salaries of America’s richest hedge fund managers with kindergarten teachers. Clinton isn’t alone. Democratic presidential challenger Bernie Sanders has spent the spring railing against the excesses of Wall Street greed while calling for a financial transactions tax and a breakup of the big banks. What can we learn from the French Revolution? By Marisa Linton The world has seen a new wave of revolutions; in North Africa, the Middle East, and beyond, we can see revolutions unfolding on our tv screens even if we’ve never been near an actual revolution in our lives. 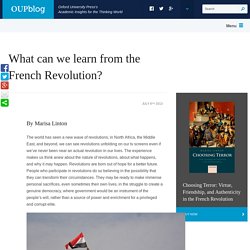 The experience makes us think anew about the nature of revolutions, about what happens, and why it may happen. Revolutions are born out of hope for a better future. People who participate in revolutions do so believing in the possibility that they can transform their circumstances. They may be ready to make immense personal sacrifices, even sometimes their own lives, in the struggle to create a genuine democracy, where government would be an instrument of the people’s will, rather than a source of power and enrichment for a privileged and corrupt elite. Yet such a fledgling democracy born out of revolution can be fragile.

Americans for Tax Fairness » Fact Sheet: Taxing Wealthy Americans. The richest 1% of Americans own 35% of the nation’s wealth. 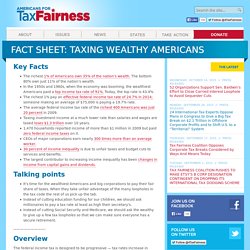 The bottom 80% own just 11% of the nation’s wealth.In the 1950s and 1960s, when the economy was booming, the wealthiest Americans paid a top income tax rate of 91%. The federal income tax is designed to be progressive — tax rates increase in steps as income rises. For decades this helped restrain disparities in income and helped provide revenue to make public services available to all Americans. Today the system has badly eroded — many multi-millionaires and billionaires pay a lower tax rate than average American families. Ironically, this has happened while the gap between the wealthy and everyone else has grown wider than ever. Tax income from investments like income from work. Why the Rich Aren't Job Creators. Ms Yves Smith, NakedCapitalism comes from the other side of the Earth daily about 6:00 p.m. 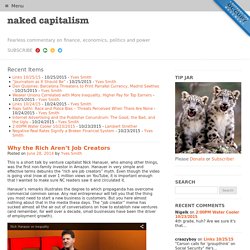 ICT (IndoChinese Time) here. It is THE one email every day I am most eager to read from the country I left behind. Unlike Nick Hanauer, I nor my disabled wife, had developed the taste for risk, and definitely did NOT have his intuition about the future.

Income Inequality: Views & Solutions From Experts. Income inequality, or the wide gap in wage growth and value between the highest-earning citizenry and the lowest-earning workers in a given nation, is increasing at an alarming rate. 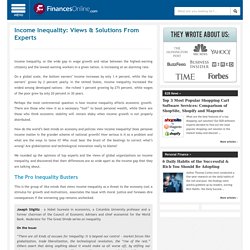 On a global scale, the bottom earners’ income increases by only 1.4 percent, while the top earners’ grows by 2 percent yearly. In the United States, income inequality increased the widest among developed nations – the richest 1 percent growing by 275 percent, while wages of the poor grew by only 20 percent in 30 years. Perhaps the most controversial question is how income inequality affects economic growth.

There are those who view it as a necessary “tool” to boost personal wealth, while there are those who think economic stability will remain shaky when income growth is not properly distributed. Income Inequality and Wealth Distribution by Country. Income inequality and wealth distribution are two different concepts, in that income inequality focuses exclusively on the income side of the equation while wealth distribution looks at how the ownership of assets in a given society is shared among its members . 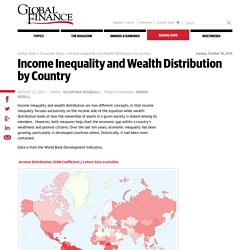 However, both measures help chart the economic gap within a country's wealthiest and poorest citizens. Over the last ten years, economic inequality has been growing, particularly in developed countries where, historically, it had been more contained. The Richest Countries in the World. Many of the world's richest countries are also the world's smallest. 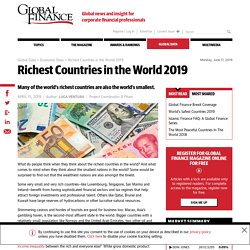 April 15, 2019 What do people think when they think about the richest countries in the world? And what comes to mind when they think about the smallest nations in the world? Some would be surprised to find out that the wealthiest nations are also amongst the tiniest. Some very small and very rich countries—like Luxembourg, Singapore, San Marino and Ireland—benefit from having sophisticated financial sectors and tax regimes that help attract foreign investments and professional talent. Shimmering casinos and hordes of tourists are good for business too: Macao, Asia's gambling haven, is the second-most affluent state in the world. Structural Adjustment—a Major Cause of Poverty. Debt is an efficient tool. 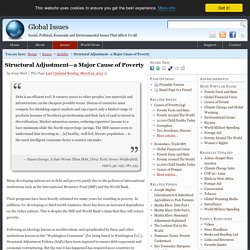 It ensures access to other peoples’ raw materials and infrastructure on the cheapest possible terms. Dozens of countries must compete for shrinking export markets and can export only a limited range of products because of Northern protectionism and their lack of cash to invest in diversification. Market saturation ensues, reducing exporters’ income to a bare minimum while the North enjoys huge savings. The IMF cannot seem to understand that investing in … [a] healthy, well-fed, literate population … is the most intelligent economic choice a country can make. — Susan George, A Fate Worse Than Debt, (New York: Grove Weidenfeld, 1990), pp. 143, 187, 235.

Are You In The Top One Percent Of The World? The growth of income inequality has long been a hot topic around the globe, but it wasn’t until the “Occupy” movement that the amount of wealth concentrated in the top one percent of society has received so much attention. Indeed, it's an incredibly powerful club. According to Oxfam, a leading poverty-fighting organization, this relatively small sliver of the population holds a staggering 48% of the world’s wealth.

But policy concerns aside, this raises an interesting question: Who exactly are the “one percent?” 10 startling facts about global wealth inequality. By Ezra Klein January 22, 2014 1. On Monday, Oxfam published a startling report showing that the richest 85 people in the world are worth more than the poorest 3.5 billion. 2. The numbers Oxfam is using come from Credit Suisse's 2013 Global Wealth Report. There are a lot of amazing numbers in that report. 3. 4. What America can do to stop income inequality. Some inequality of income and wealth is inevitable, if not necessary. If an economy is to function well, people need incentives to work hard and innovate. The pertinent question is not whether income and wealth inequality is good or bad. It is at what point do these inequalities become so great as to pose a serious threat to our economy, our ideal of equal opportunity and our democracy. We are near or have already reached that tipping point. History of Inequality : Resources.