The Facts: Gender Inequality and Violence Against Women and Girls Around the World. Downloadable in PDF. 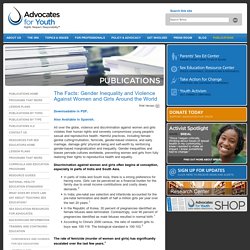 Also Available in Spanish. All over the globe, violence and discrimination against women and girls violates their human rights and severely compromises young people's sexual and reproductive health. Harmful practices, including female genital cutting/mutilation, femicide, gender-based violence, and early marriage, damage girls' physical being and self-worth by reinforcing gender-based marginalization and inequality. Gender inequalities and biases pervade cultures worldwide, preventing women and girls from fully realizing their rights to reproductive health and equality.

Discrimination against women and girls often begins at conception, especially in parts of India and South Asia. In parts of India and South Asia, there is a strong preference for having sons. The rate of femicide (murder of women and girls) has significantly escalated over the last few years.4 "Dowry deaths" are responsible for the murders of thousands of women every year, especially in South Asia. Female harassment, inequality. There&apos;s family value in paid parental leave.

For a country that so often extols family values, the United States makes it awfully hard for Americans to care for their children. 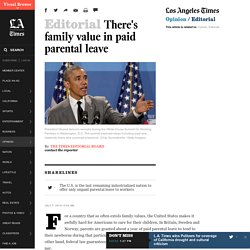 In Britain, Sweden and Norway, parents are granted about a year of paid parental leave to tend to their newborns during that particularly crucial and difficult period. In the U.S., on the other hand, federal law guarantees workers a mere 12 weeks of parental leave without pay. In fact, the U.S. is the last remaining industrialized nation to offer only unpaid parental leave to workers. And even this overstates its generosity.

The federal government deems workers eligible for unpaid parental leave only if they have been with their employer for at least 12 months, if their employer has at least 50 employees, and if they worked at least 1,250 hours during that yearlong period. As a result, parents often must choose caring for a newborn over maintaining financial stability — and it is typically the mother who is forced to sacrifice her career. Quotes from Latimes. Maternity Leave Policies in America Hurt Working Moms. In May of last year, I took a trip to Nevada to report a profile of a political candidate. 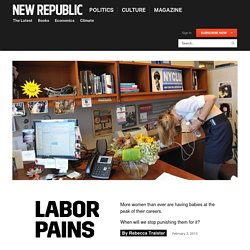 After a three-hour interview with my subject, a member of her communications team suggested we go to lunch. Midway through, I jumped up from the table and ran toward the restaurant’s bathroom. I was unable to make it all the way to the toilet and ended up retching on the floor of the stall. After cleaning up as best I could and shamefacedly informing the manager about the remaining mess, I was spent. I staggered out of the restaurant and found myself unable to do anything but take a quick nap (i.e., pass out) in the car of the campaign staffer. I didn’t have food poisoning. If you’re a person who has worked ambitiously, energetically, and efficiently for decades, it can be wildly discombobulating to find yourself suddenly tripped up by your own body, especially when it’s not illness or disability that’s stopping you, but among the most common and human of conditions. Motherhood Still a Cause of Pay Inequality. Women have made huge strides in the job market since President Kennedy signed the Equal Pay Act in 1963. 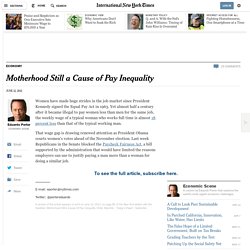 Yet almost half a century after it became illegal to pay women less than men for the same job, the weekly wage of a typical woman who works full time is almost 18 percent less than that of the typical working man. That wage gap is drawing renewed attention as President Obama courts women’s votes ahead of the November election. Last week Republicans in the Senate blocked the Paycheck Fairness Act, a bill supported by the administration that would have limited the reasons employers can use to justify paying a man more than a woman for doing a similar job. “It is incredibly disappointing that in this make-or-break moment for the middle class, Senate Republicans put partisan politics ahead of American women and their families,” Mr. Obama said in a statement. The attention is welcome. Photo Female doctors are more likely to be pediatricians than higher-paid cardiologists.