It's the Inequality, Stupid 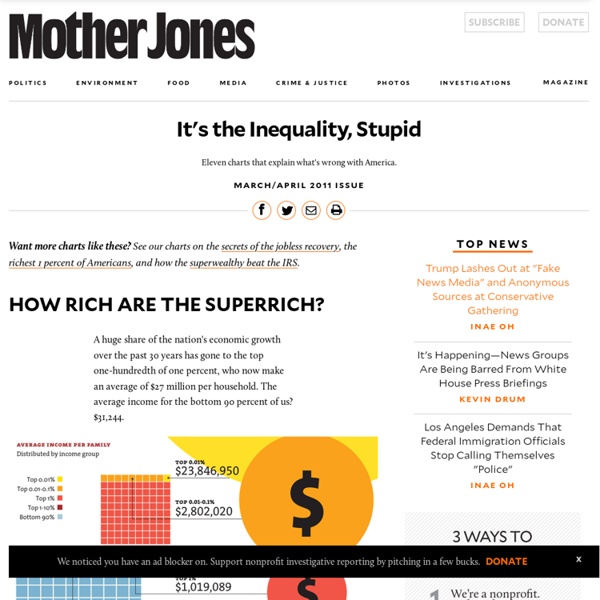 Want more charts like these? See our charts on the secrets of the jobless recovery, the richest 1 percent of Americans, and how the superwealthy beat the IRS. How Rich Are the Superrich? A huge share of the nation's economic growth over the past 30 years has gone to the top one-hundredth of one percent, who now make an average of $27 million per household. The average income for the bottom 90 percent of us? $31,244. Note: The 2007 data (the most current) doesn't reflect the impact of the housing market crash. Winners Take All The superrich have grabbed the bulk of the past three decades' gains. Download: PDF chart 1 (large) PDF chart 2 (large) | JPG chart 1 (smaller) JPG chart 2 (smaller) Out of Balance A Harvard business prof and a behavioral economist recently asked more than 5,000 Americans how they thought wealth is distributed in the United States. Download: PDF (large) | JPG (smaller) Capitol Gain Why Washington is closer to Wall Street than Main Street. Congressional data from 2009.

The biggest beneficiaries of the government safety net: working-class whites (Michael S. Williamson/The Washington Post) Working-class whites are the biggest beneficiaries of federal poverty-reduction programs, even though blacks and Hispanics have substantially higher rates of poverty, according to a new study to be released Thursday by the Center on Budget and Policy Priorities. Government assistance and tax credits lifted 6.2 million working-class whites out of poverty in 2014, more than any other racial or ethnic demographic. Half of all working-age adults without college degrees lifted out of poverty by safety-net programs are white; nearly a quarter are black and a fifth are Hispanic. The result does not simply reflect the fact that there are more white people in the country.

Raging Bulls: How Wall Street Got Addicted to Light-Speed Trading Photo: Tim Flach/Getty Wall Street used to bet on companies that build things. Now it just bets on technologies that make faster and faster trades. Editor’s note: One of the most interesting things about the catastrophe at Knight Capital Group—the trading firm that lost $440 million this week—is the speed of the collapse. The Surprising Secret to Selling Yourself - Heidi Grant Halvorson by Heidi Grant Halvorson | 8:00 AM August 29, 2012 There is no shortage of advice out there on how to make a good impression — an impression good enough to land you a new job, score a promotion, or bring in that lucrative sales lead. Practice your pitch. Speak confidently, but not too quickly. Make eye contact.

The Asian American education story you probably don’t know Most news stories focus on Asian Americans in elite colleges. Most actually don’t go there, and many students struggle. The Asian American and Pacific Islander (AAPI) community is extremely diverse in terms of culture, language, and experiences in the United States. In California, it constitutes about 16% of the total population, and almost 90% of Asian Americans and over 70% of Pacific Islanders begin college in one of California’s public community colleges or four-year universities. An accurate assessment of AAPI student outcomes in California’s post-secondary institutions must measure the linguistic, cultural, religious, socioeconomic, and historical diversity of AAPI subgroups that can be statistically obscured when grouped under the large AAPI umbrella.

Latest Market Glitch Shows 'Trading Out of Control' - US Business News Cashin: Humans Prevented Another 'Flash Crash' In this excerpt from "Closing Bell," Art Cashin of UBS talks with Bob Pisani, Bill Griffeth, and Maria Bartiromo, about today's apparent technological problem that disrupted the trading of almost 150 stocks this morning. He notes there were trading errors even before computers took over the process. What Bill Clinton Wrote vs. What Bill Clinton Said - Politics If you were following any journalists on Twitter last night, one of the most remarked upon aspects of Bill Clinton's nomination speech was how liberally he deviated from the prepared text. What was handed out to the media was four pages of single-spaced, small font text, but — as an exasperated TelePrompTer operator found out —that was really just a guideline to what Clinton actually wanted to say during his 49-minute address. We decided to compare the two versions to see how one of the great speechmakers of his era goes about his business. Most experienced public speakers know how to deviate and alter and add flourishes to their prepared remarks on the fly, but few do it as well as Clinton.

Fox Nation vs. Reality: Math-Challenged Poll Analysis On ObamaCare In yet another attempt to turn their audience into blithering idiots, the Fox Nationalists have posted the results of a CNN poll on ObamaCare with a thoroughly misleading headline and commentary: “Poll: Majority of Americans Oppose ObamaCare.” For more Fox Nation mangling of the truth, get the acclaimed book,Fox Nation vs. Reality Why Investors Willingly Pay Speed Traders Extra Billions When high-frequency traders defend themselves against criticism that they’re screwing up the stock market by distorting prices or making it more volatile, their argument usually goes like this: Yes, but we’ve lowered the costs of trading. Which is true, in a way. The bid-ask spread for many stocks—the difference between what it costs to buy or sell a share—is often just a penny, much narrower than it used to be.

Why Are We So Afraid of Creativity? Creativity: now there’s a word I thought I wouldn’t see under attack. Don’t we live in a society that thrives on the idea of innovation and creative thought? The age of the entrepreneur, of the man of ideas, of Steve Jobs and the think different motto? Well, yes and no. That is, indisputably yes on the surface. But no in a way that you might not expect: we may say we value creativity, we may glorify the most imaginative among us, but in our heart of hearts, imagination can scare us.

Worldwide hemisphere-dependent lean in Cook pines - Johns - 2017 - Ecology Under most conditions, trees grow vertically in response to the opposing influences of light and gravity (Wyatt and Kiss 2013). In challenging environments, where competition for light or mechanical stress is intense, trees may grow non-vertically (Loehle 1986). Here we describe a novel hemisphere-dependent leaning habit in Araucaria columnaris (Cook pine) (J.R.

Yes, I'm RICH and I DESERVE it! by augustpide Feb 24