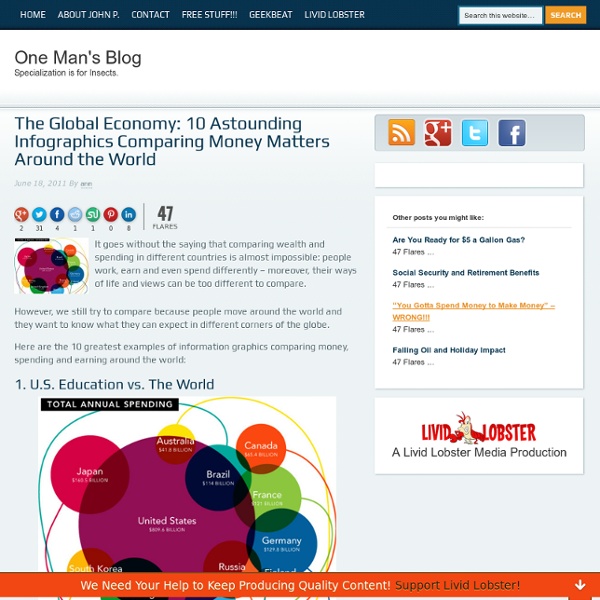 47 Flares Google+ 2 Twitter 31 Facebook 4 Reddit 1 StumbleUpon 1 Pin It Share 0 LinkedIn 8 inShare8 47 Flares × It goes without the saying that comparing wealth and spending in different countries is almost impossible: people work, earn and even spend differently – moreover, their ways of life and views can be too different to compare. However, we still try to compare because people move around the world and they want to know what they can expect in different corners of the globe. Here are the 10 greatest examples of information graphics comparing money, spending and earning around the world: 1. U.S. The most interesting finding of the stats research and the visualization: The U.S. is the clear leader in total annual spending, but ranks 9th in Science performance and 10th in Math. Note: It is unclear what was the measure used to compare the countries in their math and science performance. 2. Most Expensive Cities is the World is an interesting visualization by Home Loan Finder. 3. 4. 5. 6.

What America’s immigrants looked like when they arrived on Ellis Island We hear so often that America is "a nation of immigrants" or a "cultural mixing pot" that the phrase has become kind of a tired cliche. But actually seeing that history is a different story. The fascinating photographs below -- of people in their native costume passing through Ellis Island in the early 20th Century -- hint at just how incredible and unique America's history is as a nation of immigrants. These photos were taken by Augustus Sherman, an amateur photographer who worked as the chief registry clerk on Ellis Island from 1892 until 1925. Sherman snapped these photographs of people passing through customs in their native costume. They were published in National Geographic in 1907 and once hung on the walls in the headquarters of the federal Immigration Service in Manhattan, according to the Public Domain Review.

Why We Ask to See Candidates’ Tax Returns Photo Boston — Lost in the debate over Donald J. Trump’s refusal to release his tax returns is the story of where the custom of disclosure comes from — and why it can be so valuable as a measure of character. Watch how immigration in America has changed since 1820 by Alvin Chang on April 26, 2016 The idea of banning an entire racial or ethnic group from entering the US isn't a new proposal. Donald Trump is far from the first person to propose it. In fact, this country has a long history of picking and choosing whom it lets into its borders — and whom it doesn't.

Corruption Report: Turning to Populist Leaders May Make Things Worse An anti-corruption watchdog is highlighting a link between inequality and government corruption with the release of its annual global index, saying people are increasingly looking to populist leaders who promise to tackle corruption, but are likely to make the situation worse. “In countries with populist or autocratic leaders, we often see democracies in decline and a disturbing pattern of attempts to crack down on civil society, limit press freedom, and weaken the independence of the judiciary,” said Jose Ugaz, chair of Transparency International, as the group released its report Wednesday. “Instead of tackling crony capitalism, those leaders usually install even worse forms of corrupt systems.” The report says countries need “deep-rooted systemic reforms” to address growing imbalances of power and wealth. It recommends those changes include public disclosure of who owns companies and imposing sanctions against those who help move corrupt money across borders. Index based on surveys

Trump’s First Test on Taxes - BillMoyers.com Trump’s First Test on Taxes This post originally appeared at OtherWords.org. Donald Trump’s voters have high hopes that he’ll boost the economy and protect jobs for those who’ve been left behind after three decades of flat or shrinking paychecks. Culture - The Instagram artist who fooled thousands Between April and September 2014, the Argentine-born artist Amalia Ulman presented herself online as an ‘Instagram Girl’. Using popular hashtags from micro-celebrities on the popular social network, Ulman created a three-part performance work that explored how women present themselves online. Entitled Excellences & Perfections, the project saw Ulman take on the roles of ‘cute girl’, ‘sugar baby’ and ‘life goddess’.

What So Many People Don’t Get About the U.S. Working Class My father-in-law grew up eating blood soup. He hated it, whether because of the taste or the humiliation, I never knew. His alcoholic father regularly drank up the family wage, and the family was often short on food money. They were evicted from apartment after apartment. He dropped out of school in eighth grade to help support the family. Eventually he got a good, steady job he truly hated, as an inspector in a factory that made those machines that measure humidity levels in museums.

Rio Olympics 2016: Artist JR honors a Sudanese athlete who's missing the Olympics, with a towering mural in Rio — Quartz “The goal of Olympism is to place sport at the service of the harmonious development of humankind, with a view to promoting a peaceful society concerned with the preservation of human dignity,” reads one of the fundamental principles of Olympism (pdf, p.13), also known as the philosophy of the Olympic games. Time and again, the Olympic games have served to reflect and even amplify this spirit. It has allowed people to represent their countries—even if they weren’t officially recognized by their neighbors or members of the United Nations. This year Kosovo, still officially part of Serbia, will make its Olympic debut with eight athletes after the IOC recognized its bid for independent status. Chinese Taipei, a nation more traditionally known as Taiwan, will participate in Rio with 59 athletes under a cloud of controversy.

How 90% of American Households Lost an Average of $17,000 in Wealth to Plutocrats in 2016 - BillMoyers.com How 90% of American Households Lost an [...] The average 1 percent household took an additional $3 million of our national wealth in one year while education and infrastructure went largely unfunded. (Photo by Quinn Dombrowski/ flickr CC 2.0) This post originally appeared at Common Dreams.