These international destinations are open to US tourists. Editor's Note — CNN Travel updates this article periodically. 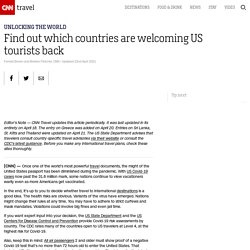 It was last updated in its entirety on April 18. The entry on Greece was added on April 20. Entries on Sri Lanka, St. Kitts and Thailand were updated on April 21. The US State Department advises that travelers consult country-specific travel advisories via their website or consult the CDC's latest guidance. When will all this talk about sexual harassment end? Optimistic facts and charts that show the world is getting much, much better. For most Americans, these feel like bleak times. We have a massively unpopular, scandal-plagued president whose aides are being convicted of serious federal felonies. Overt, old-fashioned racism is publicly visible and powerful in a way it wasn’t only five years ago. More than 200 admired, powerful men have been accused of sexual misconduct or assault. #MeToo Helps a Woman Find Her Voice After 50 Years. Flattening the Coronavirus Curve. What exactly do those two curves show? 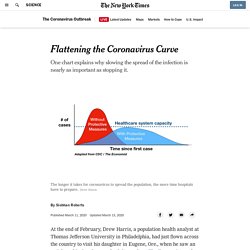 Both curves add up the number of new cases over time. The more people reporting with the virus on a given day, the higher the curve; a high curve means the virus is spreading fast. A low curve shows that the virus is spreading slower — fewer people are diagnosed with the disease on any given day. - The Washington Post. Chicago Tribune. Fact-Checking Claims about Winners and Losers with New Tax Reform (Part II) – in All things. In the last article, I started working through some of the more prominent claims of the massive number of articles about “who won/lost with the new tax law.” 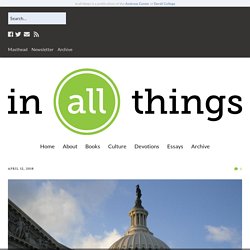 In particular, I addressed a couple of claims that play to a sort of reverse-Robin Hood narrative about the nature of the Tax Cuts and Jobs Act of 2017. Today, we’ll pick up where we left off with a couple of claims that are similarly popular, and I’ll try to put a bow on all of this before assessing the new tax law in its broader political context for the last piece of this series. Perception: This is a victory for Red States over Blue States.

Correction: The changes to the individual income tax are better for people who will claim the standard deduction and are more likely to mean less to people in high tax/high-cost states. ’s Use of Your Data. Why didn't anyone want to repair Notre Dame before the fire? The nave of Notre Dame is, as we all know, currently without a roof. 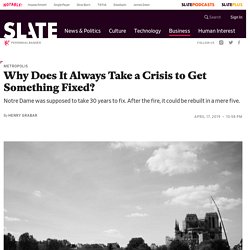 Notre Dame fire: Should $1 billion in donations go to France’s poor? As more than $1 billion has rolled in to repair the Notre Dame Cathedral in Paris, a debate is raging over whether the glut of donations would have been better spent on other causes. 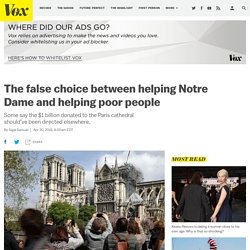 People on social media asked why similar support was not going to Native American sacred lands destroyed in fracking and development, to historically black Louisiana churches devastated in arson attacks, to the fight against climate change, or to development aid for African countries. Citizen Lawsuits Will Police Pruitt's EPA. If President Donald Trump’s administration dismantles the Environmental Protection Agency to the point where it can no longer effectively police polluters, there’s still hope: you. 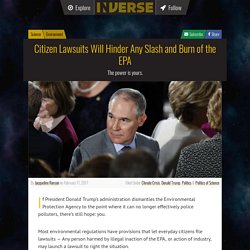 Citizen Lawsuits Will Police Pruitt's EPA. How Facebook Groups sparked a crisis in France. Why Brown v. Board of Education Could Be in Jeopardy, 65 Years Later. Friday marks the 65-year anniversary of the landmark Supreme Court case Brown v. 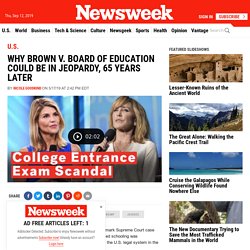 Board of Ed, which ruled that segregated schooling was unconstitutional in the United States and transformed the U.S. legal system in the process. But those accomplishments could soon be at risk as the Trump administration attempts to push through nearly 30 judicial nominees who refuse to affirm that the case was correctly decided. Jeffrey Rosen, President Trump's new deputy attorney general, also refused to affirm the ruling in the case. Rosen said in response to a question about it that he couldn't be expected to give his opinion on "thousands of Supreme Court opinions. 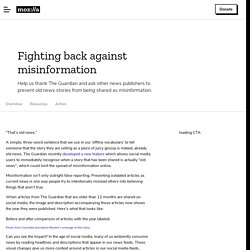 A simple, three-word sentence that we use in our ‘offline vocabulary’ to tell someone that the story they are selling as a piece of juicy gossip is indeed, already old news. The Guardian recently developed a new feature which allows social media users to immediately recognise when a story that has been shared is actually "old news", which could limit the spread of misinformation online. Misinformation isn’t only outright false reporting. Presenting outdated articles as current news is one way people try to intentionally mislead others into believing things that aren’t true. When articles from The Guardian that are older than 12 months are shared on social media, the image and description accompanying those articles now shows the year they were published. Locals protest to put an end to endless war. ‘God Is Going to Have to Forgive Me’: Young Evangelicals Speak Out.

The role of evangelical Christianity in American politics has been a hotly discussed topic this year, intersecting with front-burner issues like immigration, the Supreme Court and social justice. 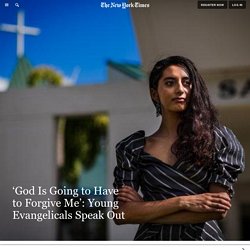 Often the loudest evangelical voices are white, male and … not young. With just days left before the midterm elections — two years after President Trump won the White House with a record share of white, evangelical support — we asked young evangelicals to tell The Times about the relationship between their faith and their politics. - The Washington Post. Firstthings. What I Saw Treating the Victims From Parkland Should Change the Debate on Guns. 5 facts about Millennial households. Millennials are the largest living generation by population size (79.8 million in 2016), but they trail Baby Boomers and Generation Xers when it comes to the number of households they head. 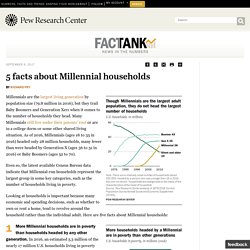 Millennials overtake Baby Boomers as America’s largest generation. By Richard Fry Millennials have surpassed Baby Boomers as the nation’s largest living generation, according to population estimates released this month by the U.S. Census Bureau. Millennials, whom we define as those ages 18-34 in 2015, now number 75.4 million, surpassing the 74.9 million Baby Boomers (ages 51-69). Regulation - Has there ever been a documented instance of the problem that net neutrality purports to solve? - Politics Stack Exchange. Here's a comment that's been circulating on reddit discussing the answer to this question. I didn't write it, but I thought it had excellent information.

It was originally posted (as far as I can tell) by u/The_Brutally_Honest in an r/OutOfTheLoop thread about Net Neutrality. Here's the link to the comment. Also for anyone who tells you that "Net Neutrality is solving a problem that doesn't exist"... or anything along those lines: Here's a brief history on what the internet companies were doing that triggered Net Neutrality to be put in place: MADISON RIVER: In 2005, North Carolina ISP Madison River Communications blocked the voice-over-internet protocol (VOIP) service Vonage. Neither Republicans Nor Democrats Want Me. My friend Napp Nazworth has pointed out that Republicans have a race problem and Democrats have a religion problem.

As Muslim women, we actually ask you not to wear the hijab in the name of interfaith solidarity. Using Math to Calm Fears about Terrorism. How Much (Or Little) The Middle Class Makes, In 30 U.S. Cities : Planet Money. "My family's household income is $250,000 a year, but I promise you I am middle class. " Confessions of a congressman: 9 secrets from the inside. The Big Picture. When will we run out of oil, and what happens then? - HowStuffWorks.