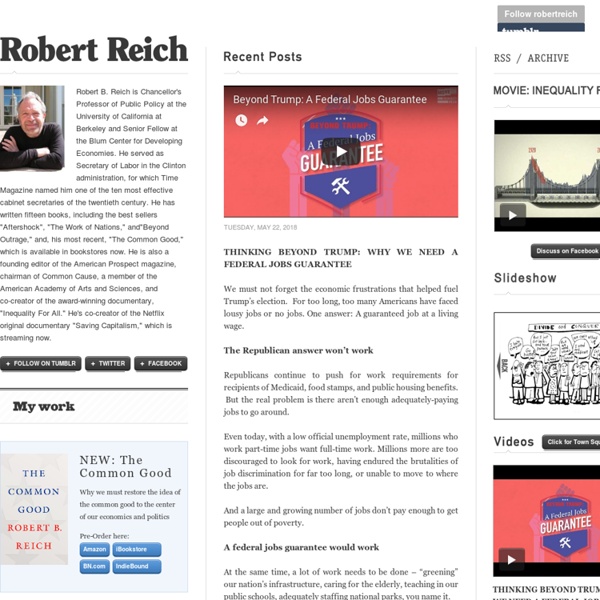 Every year I ask my class on “Wealth and Poverty” to play a simple game. I have them split up into pairs, and imagine I’m giving one of them $1,000. They can keep some of the money only on condition they reach a deal with their partner on how it’s to be divided up between them. I explain they’re strangers who will never see one other again, can only make one offer and respond with one acceptance (or decline), and can only communicate by the initial recipient writing on a piece of paper how much he’ll share with the other, who must then either accept (writing “deal” on the paper) or decline (“no deal”). You might think many initial recipients of the imaginary $1,000 would offer $1 or even less, which their partner would gladly accept. After all, even one dollar is better than ending up with nothing at all.

Money, Power and Wall Street Did the Fed’s Emergency Lending Prop Up “Too Big to Fail”? May 1, 2012, 8:44 pm ET · by Azmat Khan The Obama administration arrived in Washington in early 2009 facing the worst financial crisis since the Great Depression — and an American public outraged by bailouts for the financial institutions that had gotten them there. A Bit More COLOR ! ! ! Molly Weasley 75% Superwash Merino/25% Nylon great for sox and fingerless wrist warmers Arthur Weasley in Silk oh, yeah, SILK How We All Miss the Point on School Shootings In 1998, a high school junior named Eric Harris from Colorado wanted to put on a performance, something for the world to remember him by. A little more than a year later, Eric and his best friend Dylan Klebold would place bombs all over their school — bombs large enough to collapse large chunks of the building and to kill the majority of the 2,000 students inside — and then wait outside with semi-automatic weapons to gun down any survivors before ending their own lives. “It’ll be like the LA riots, the Oklahoma bombing, WWII, Vietnam, Duke and Doom all mixed together,” Eric wrote in his journal. “Maybe we will even start a little rebellion or revolution to fuck things up as much as we can.

Average Life Span The other day a friend of mine sent a URL that would 'calculate' an individual's virtual age and life expectancy. Just a fun sort of diversion. That got me thinking . . . . . so I went downstairs and fired-up my pc and went to Family Tree Maker program and brought up my direct-line ancestors and their age at time of death. I used data from a limited number of generations so that a more balanced data base would be used. My maternal direct-line ancestors is very much limited compared to my paternal ancestors.

Another Bank Bailout The answer, of course, is everybody. In fact, the whole story is starting to feel like a comedy routine: yet again the economy slides, unemployment soars, banks get into trouble, governments rush to the rescue — but somehow it’s only the banks that get rescued, not the unemployed. Just to be clear, Spanish banks did indeed need a bailout. Spain was clearly on the edge of a “doom loop” — a well-understood process in which concern about banks’ solvency forces the banks to sell assets, which drives down the prices of those assets, which makes people even more worried about solvency. Governments can stop such doom loops with an infusion of cash; in this case, however, the Spanish government’s own solvency is in question, so the cash had to come from a broader European fund.

History of U.S. Military Interventions since 1890 by Dr. Zoltan Grossman The following is a partial list of U.S. military interventions from 1890 to 2014. Battle of Cold Harbor - encyclopedia article about Battle of Cold Harbor. The Battle of Cold Harbor was fought from May 31 to June 12, 1864 (with the most significant fighting occurring on June 3). It was one of the final battles of Union Lt. Gen. Ulysses S. The Part-Time Employment Ratio: Up Slightly in March Let's take a close look at Friday's employment report numbers on Full and Part-Time Employment. Buried near the bottom of Table A-9 of the government's Employment Situation Summary are the numbers for Full- and Part-Time Workers, with 35-or-more hours as the arbitrary divide between the two categories. The Labor Department has been collecting this since 1968, a time when only 13.5% of US employees were part-timers.

Lysander Spooner - encyclopedia article about Lysander Spooner. Lysander Spooner (January 19, 1808 – May 14, 1887) was an American individualist anarchist, political philosopher, Deist, Unitarian abolitionist, supporter of the labor movement, legal theorist, and entrepreneur of the nineteenth century. He is also known for competing with the U.S. Post Office with his American Letter Mail Company, which was forced out of business by the United States government.