The term 'snowflake' can damage young people's mental health... One term that is often associated with millennials is ‘special snowflake’, however experts have warned the public that the term can have a damaging effect on youths. 72 percent of young people have stated that being called a ‘snowflake’ has had a negative impact on their mental health. 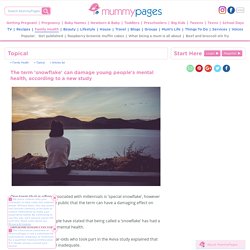 The group of 16 to 24-year-olds who took part in the Aviva study explained that the term made them feel inadequate. The term ‘special snowflake’ is often used as an insult against people who are viewed as weak or overly fussy. 74 percent of the people who took part in the study claimed that the phrase had a poor impact on their mental health. The participants revealed that their generation has suffered from a number of mental health issues in the past year, including anxiety. He shared that young people continue to struggle with talking about their mental health problems. Pensioner incomes 'outstrip those of working families' Image copyright Thinkstock Typical pensioner incomes now outstrip those of working-age people, a report from the Resolution Foundation says. 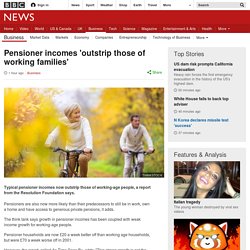 Pensioners are also now more likely than their predecessors to still be in work, own a home and have access to generous private pensions, it adds. The think tank says growth in pensioner incomes has been coupled with weak income growth for working-age people. Pensioner households are now £20 a week better off than working age households, but were £70 a week worse off in 2001. However, the report, called As Time Goes By, adds: "This strong growth is not the result of a boom time for all pensioners, with most finding that their personal situation changes little from year-to-year It says while typical incomes across the pensioner population have grown by more than 30% since 2001, the typical income of someone who turned 65 in that year was only 7% higher by 2014.

Sources of income Review triple-lock. Great-granny, 90, wows the world with her amazing water-skiing... We have a new answer to the question of where we want to be when we’re 90: we now officially want to be just like Millie Sullens. 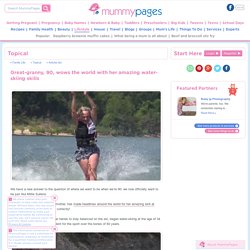 An adult at 18? Not any more: Adolescence now ends at 25 to prevent young people getting an inferiority complex. Child psychologists getting new guidelines about the age range they coverThe upper age range for adolescence is being increased from 18 to 25It is hoped changes will prevent children being 'rushed' through childhood By Victoria Woollaston Published: 15:48 GMT, 24 September 2013 | Updated: 13:29 GMT, 26 September 2013 Adolescence no longer ends when people hit 18, according to updated guidelines being given to child psychologists. 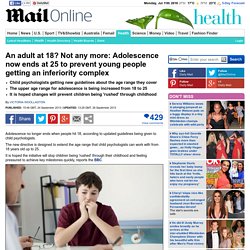 The new directive is designed to extend the age range that child psychologists can work with from 18 years old up to 25. It is hoped the initiative will stop children being 'rushed' through their childhood and feeling pressured to achieve key milestones quickly, reports the BBC. New guidelines are being given to child psychologists across the UK that state the age of adolescence should be increased to 25. England's youngest high achievers. For many, young adulthood is a time of tentatively finding your place in the world, sleeping late, partying hard and not becoming a mayor. 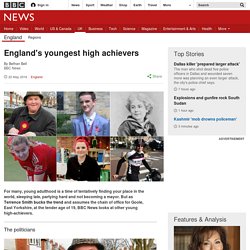 But as Terrence Smith bucks the trend and assumes the chain of office for Goole, East Yorkshire, at the tender age of 19, BBC News looks at other young high-achievers. The politicians Terence Smith is one of a cavalcade of young people with an interest in running the country. And Mr Smith is dedicated to the cause, displaying a sensible approach to his future. 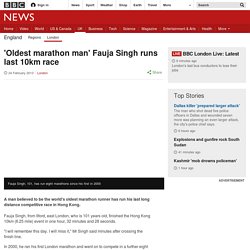 Fauja Singh, from Ilford, east London, who is 101 years old, finished the Hong Kong 10km (6.25 mile) event in one hour, 32 minutes and 28 seconds. "I will remember this day. I will miss it," Mr Singh said minutes after crossing the finish line. In 2000, he ran his first London marathon and went on to compete in a further eight marathons. Earlier in the day, he said: "I am feeling a bit of happiness and a bit of sadness mixed together. 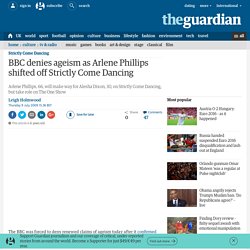 The BBC has been accused of treating older female stars badly before, when 59-year-old Moira Stuart was dropped from her Sunday morning news bulletin and Countryfile hosts Michaela Strachan, Charlotte Smith, Miriam O'Reilly and Juliet Morris, who are all in their 40s and 50s, were replaced with younger hosts. Jay Hunt, the BBC1 controller, speaking at the launch of BBC1's autumn season today, denied Phillips had been dropped because of her age, saying that there were other older women on BBC1, such as 60-year-old Anne Robinson, who is returning to front Watchdog.