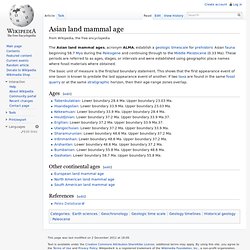 This shows that the first appearance event of one taxon is known to predate the last appearance event of another. If two taxa are found in the same fossil quarry or at the same stratigraphic horizon, then their age-range zones overlap. Ages[edit] Tabenbulakian: Lower boundary 28.4 Ma. Upper boundary 23.03 Ma.Hsandagolian: Lower boundary 33.9 Ma. Other continental ages[edit] References[edit] Paleo Database. Arshantan. Bumbanian. Paleocene–Eocene Thermal Maximum. Climate change during the last 65 million years as expressed by the oxygen isotope composition of benthic foraminifera.

The Paleocene-Eocene Thermal Maximum (PETM) is characterized by a brief but prominent negative excursion, attributed to rapid warming. Note that the excursion is understated in this graph due to the smoothing of data. The PETM is characterized by extreme changes on Earth’s surface,[5] whereby global temperatures rose by about 6 °C (11 °F). South American land mammal age. The basic unit of measure is the first/last boundary statement. 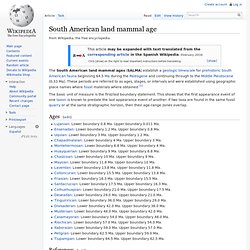 This shows that the first appearance event of one taxon is known to predate the last appearance event of another. If two taxa are found in the same fossil quarry or at the same stratigraphic horizon, then their age-range zones overlap. Ages[edit] Lujanian: Lower boundary 0.8 Ma. Upper boundary 0.011 Ma.Ensenadan: Lower boundary 1.2 Ma. References[edit] European land mammal age. Biostratigraphic methods[edit] The European mammalian biozones were established for the Paleogene (8 zones) and Neogene (7 zones) separately. 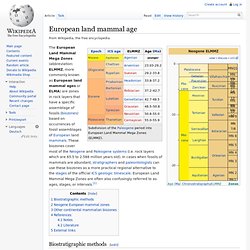 Some of these, especially for the Neogene, were already established in the 19th century. The Villafranchian was, for example, introduced by Lorenzo Pareto in 1865. A finer subdivision was established by Pierre Mein in 1975, who divided the Neogene in 17 zones, known as the MN zonation, indicated by the letters MN (Mammal Neogene) and a number. Similarly, a more detailed subdivision for the Paleogene period was established. Messel pit. The Messel Pit (German: Grube Messel) is a disused quarry near the village of Messel, (Landkreis Darmstadt-Dieburg, Hesse) about 35 km (22 mi) southeast of Frankfurt am Main, Germany. 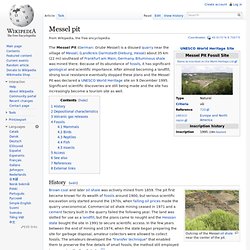 Bituminous shale was mined there. Because of its abundance of fossils, it has significant geological and scientific importance. After almost becoming a landfill, strong local resistance eventually stopped these plans and the Messel Pit was declared a UNESCO World Heritage site on 9 December 1995. Significant scientific discoveries are still being made and the site has increasingly become a tourism site as well. History[edit] Fur Formation. The Fur Formation is a unit of diatomitic sediment approximately 60 meters thick consisting of diatoms and clay minerals with up to 180 layers of volcanic ash.[2] In Danish literature the formation has informally been referred to as the moler (Ler means clay). 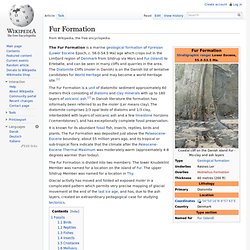 The diatomite comprises 2/3 opal tests of diatoms and 1/3 clay, interbedded with layers of volcanic ash and a few limestone horizons (‘cementstones’), and has exceptionally complete fossil preservation. It is known for its abundant fossil fish, insects, reptiles, birds and plants. The Fur Formation was deposited just above the Palaeocene-Eocene boundary, about 55 million years ago, and its tropical or sub-tropical flora indicate that the climate after the Paleocene-Eocene Thermal Maximum was moderately warm (approximately 4-8 degrees warmer than today). Fossils[edit] Fossils of great diversity and unique preservation (only 10 my. after the ‘great extinction’ of dinosaurs, ammonites etc.) Mammal Paleogene zone. The Mammal Paleogene zones or MP zones are biostratigraphic zones in the stratigraphic record of the Paleogene period of Europe. 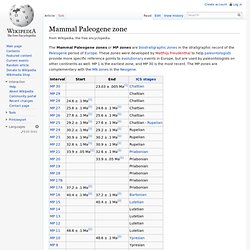 These zones were developed by Matthijs Freudenthal to help paleontologists provide more specific reference points to evolutionary events in Europe, but are used by paleontologists on other continents as well. Wasatchian. The Wasatchian North American Stage on the geologic timescale is the North American faunal stage according to the North American Land Mammal Ages chronology (NALMA), typically set from 55,400,000 to 50,300,000 years BP lasting 5.1 million years.[1] It is usually considered to be within the Eocene, more specifically the Early Eocene. 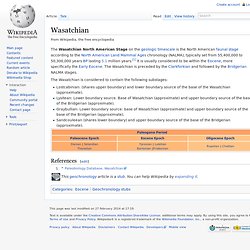 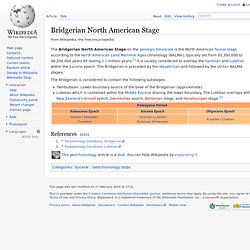 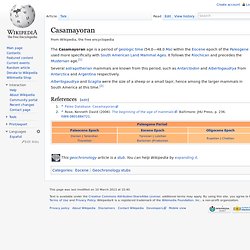 Ypresian. The Ypresian is sometimes included with the Lutetian in an Early Eocene subepoch. 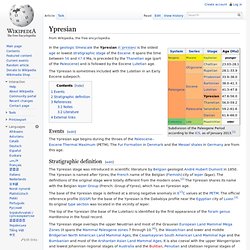 Events[edit] The Ypresian age begins during the throes of the Paleocene–Eocene Thermal Maximum (PETM). The Fur Formation in Denmark and the Messel shales in Germany are from this age. Stratigraphic definition[edit] The Ypresian stage was introduced in scientific literature by Belgian geologist André Hubert Dumont in 1850.