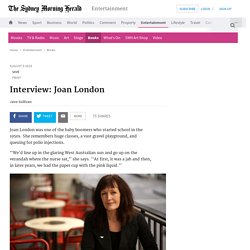 She remembers huge classes, a vast gravel playground, and queuing for polio injections. ‘‘We’d line up in the glaring West Australian sun and go up on the verandah where the nurse sat,’’ she says. ‘‘At first, it was a jab and then, in later years, we had the paper cup with the pink liquid.’’ The jab and the cup saved the children from the great bogey of the age: London was on the edge of a lucky generation. Until Jonas Salk and Albert Sabin developed their vaccines, and until they became widely used during the 1950s and ’60s, polio was a common disease, with frequent epidemics. Many people caught it; it spread into even the most remote areas. Polio was a parent’s greatest fear, because so many children caught it, and nobody knew how it happened, or what to do about it.

‘‘Then there were kids you’d see in callipers.’’ ‘The Golden Age’ by Joan London. Joan London’s third novel, The Golden Age, is about the love between Frank and Elsa, two polio-stricken children at a rehabilitation facility in suburban Perth in the early 1950s. 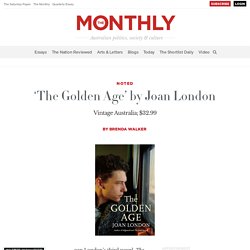 Frank, or Ferenc, is a Hungarian refugee who makes the connection between illness and his time as a fugitive hiding in a ceiling in war-ravaged Budapest: “he could still sense that time in the ceiling somewhere deep in his body … He felt it as the weak spot, the broken part, the gap that had let polio in.” Australia, his place of refuge, has become a place of suffering. Peace did not offer respite from suffering in the 20th century. In the year that World War One ended, Spanish flu killed immense numbers of soldiers and civilians; the incidence of polio, which often targets children, burgeoned after World War Two (and is currently rising in Pakistan). For many, wartime losses and displacement were followed by the sorrow and horror of disease.

Kerryn Goldsworthy reviews 'The Golden Age' by Joan London. When the polio epidemics at the hinge of the twentieth century were catching hundreds of Australian children and adults in their web of pathogens, a pub in suburban Perth called ‘The Golden Age’ was converted – with its name unchanged – into a convalescent home for children who were recovering from polio but still unready to go back into the world. 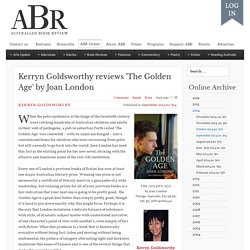 Joan London has used this fact as the starting point for her new novel, sticking with the allusive and luminous name of the real-life institution. Every one of London’s previous books of fiction has won at least one major Australian literary prize. Winning one prize is not necessarily a certificate of literary merit or a guarantee of a wide readership, but winning prizes for all of your previous books is a fair indication that your next one is going to be pretty good. The Golden Age is a great deal better than simply pretty good, though it is hard to pin down exactly why this might be so. Joan London (photograph by Tony Ashby, 2008) Sydneyreviewofbooks. When I remember being a child and reading, I think first of sunlight, which I was always manoeuvring to be partly, though not wholly, in. 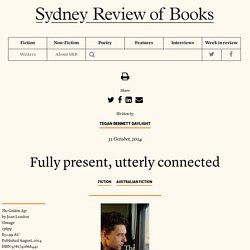 This sunlight is always linked to quiet, to stillness. The sense of movement around me, but happening at a distance – my mother talking on the telephone (her voice louder as she strayed to the very end of the cord), or my sister using her sewing machine – the sort of movement that envelops you but allows you to be alone. The psychotherapist and writer Adam Phillips, referring to D.

W. Winnicott’s essay ‘The Capacity to be Alone’ (1958), says that ‘the goal for the child is to be alone in the presence of the mother. Joan London's third novel Golden Age lives up to its name. Fiction The Golden Age JOAN LONDON Vintage, $32.99 The best way to plumb the lovely depths of this novel is to let it reveal itself: "He sometimes thought he only loved properly in retrospect"; or: "Once you have tasted meaninglessness, you lose any idea of reward, or punishment, or conventional virtue. 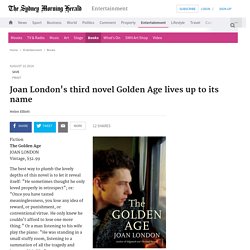 He only knew he couldn't afford to lose one more thing. " Or a man listening to his wife play the piano: "He was standing in a small stuffy room, listening to a summation of all the tragedy and beauty of his life. " The Golden Age itself is a summation of the tragedy and beauty of several lives. It is Joan London's third novel. Before Jonas Salk found the miracle cure, the endless golden Australian summers were always undercut by the dread of polio. Frank turns out to be one of the lucky ones. Children can, and do fall in love and love denied is famously inspirational to artists. London is not ironic, nor as playful as Mann but gives the reader the experience of reading vertically.