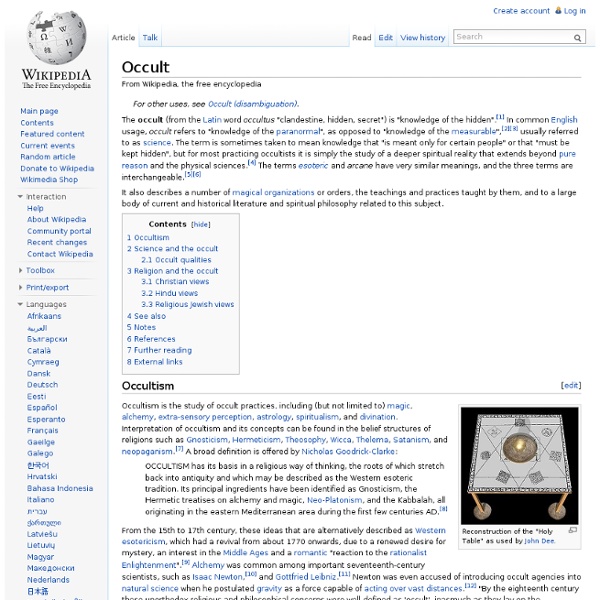 Secret society "Secret Society Buildings at Yale College", by Alice Donlevy[1] ca. 1880. Pictured are: Psi Upsilon (Beta Chapter), 120 High Street. Left center: Skull & Bones (Russell Trust Association), 64 High Street. A secret society is a club or organization whose activities, events, and inner functioning are concealed from non-members. Anthropologically and historically, secret societies are deeply interlinked with the concept of the Mannerbund, the all-male "warrior-band" or "warrior-society" of pre-modern cultures (see H. A purported "family tree of secret societies" has been proposed, although it may not be comprehensive.[2] The Thuggee were a secret cult of assassins who worshipped the Hindu goddess Kali. Alan Axelrod, author of the International Encyclopedia of Secret Societies and Fraternal Orders, defines a secret society as an organization that: Is exclusive.Claims to own special secrets.Shows a strong inclination to favor its own. David V. Politics[edit] Revolutions[edit] References[edit]

Three Books of Occult Philosophy De Occulta Philosophia, Libri tres Three Books of Occult Philosophy (De Occulta Philosophia libri III) is Heinrich Cornelius Agrippa's study of occult philosophy, acknowledged as a significant contribution to the Renaissance philosophical discussion concerning the powers of ritual magic and its relationship with religion. The three books deal with Elemental, Celestial and Intellectual magic. The books outline the four elements, astrology, kabbalah, numbers, angels, God's names, the virtues and relationships with each other as well as methods of utilizing these relationships and laws in medicine, scrying, alchemy, ceremonies, origins of what are from the Hebrew, Greek, and Chaldean context. These arguments were common amongst other hermetic philosophers at the time and before. Relation to the Knights Templar and magic use[edit] Three Books of Occult Philosophy helped perpetuate the belief in modern popular culture that the Knights Templar practiced witchcraft. See also[edit] References[edit]

Anemia Anemia is the most common disorder of the blood. The several kinds of anemia are produced by a variety of underlying causes. It can be classified in a variety of ways, based on the morphology of RBCs, underlying etiologic mechanisms, and discernible clinical spectra, to mention a few. The three main classes include excessive blood loss (acutely such as a hemorrhage or chronically through low-volume loss), excessive blood cell destruction (hemolysis) or deficient red blood cell production (ineffective hematopoiesis). Of the two major approaches to diagnosis, the "kinetic" approach involves evaluating production, destruction and loss,[3] and the "morphologic" approach groups anemia by red blood cell size. Signs and symptoms[edit] Main symptoms that may appear in anemia[5] Anemia goes undetected in many people, and symptoms can be minor or vague. Most commonly, people with anemia report feelings of weakness, or fatigue, general malaise, and sometimes poor concentration. Causes[edit]

Age of Enlightenment The Age of Enlightenment (or simply the Enlightenment, or Age of Reason) is an era from the 1650s to the 1780s in which cultural and intellectual forces in Western Europe emphasized reason, analysis and individualism rather than traditional lines of authority. It was promoted by philosophes and local thinkers in urban coffeehouses, salons and masonic lodges. It challenged the authority of institutions that were deeply rooted in society, such as the Catholic Church; there was much talk of ways to reform society with toleration, science and skepticism. New ideas and beliefs spread around the continent and were fostered by an increase in literacy due to a departure from solely religious texts. Publications include Encyclopédie (1751–72) that was edited by Denis Diderot and (until 1759) Jean le Rond d'Alembert. Use of the term[edit] If there is something you know, communicate it. Chartier (1991) argues that the Enlightenment was only invented after the fact for a political goal. Goals[edit]

The Book of THOTH - The complete guide to the Tarot, Magick and Magick One must find out for oneself, and make sure beyond doubt, who one is, what one is, why one is ...Being thus conscious of the proper course to pursue, the next thing is to understand the conditions necessary to following it out. After that, one must eliminate from oneself every element alien or hostile to success, and develop those parts of oneself which are specially needed to control the aforesaid conditions. (Crowley, Magick, Book 4 p.134) Crowley defined Magick as "the science and art of causing change to occur in conformity with will Magick is the Science of understanding oneself and one's conditions. Even so, Crowley recognized that paranormal effects and magical powers have some level of value for the individual: My own experience was very convincing on this point; for one power after another came popping up when it was least wanted, and I saw at once that they represented so many leaks in my boat. There are several ways to view what Magick is. However, he further asserts:

Devil The Devil (from Greek: διάβολος or diábolos = slanderer or accuser)[1] is believed in many religions, myths and cultures to be a supernatural entity that is the personification of evil and the enemy of God and humankind. The nature of the role varies greatly, ranging from being an effective opposite force to the creator god, locked in an eons long struggle for human souls on what may seem even terms (to the point of dualistic ditheism/bitheism), to being a comical figure of fun or an abstract aspect of the individual human condition. While mainstream Judaism contains no overt concept of a devil, Christianity and Islam have variously regarded the Devil as a rebellious fallen angel that tempts humans to sin, if not commit evil deeds himself. In these religions – particularly during periods of division or external threat – the Devil has assumed more of a dualistic status commonly associated with heretics, infidels, and other unbelievers. Etymology Abrahamic religions Judaism Christianity Islam

Scrying Scrying (also called seeing or peeping) is the practice of looking into a translucent ball or other material with the belief that things can be seen, such as spiritual visions, and less often for purposes of divination or fortune-telling. The most common media used are reflective, translucent, or luminescent substances such as crystals, stones, glass, mirrors, water, fire, or smoke. Scrying has been used in many cultures in the belief that it can divine the past, present, or future. The visions that come when one stares into the media are thought to come from one's subconscious and imagination,[1] though in the past they were thought to come from gods, spirits, devils, the psychic mind, depending on the culture and practice. Although scrying is most commonly done with a crystal ball, it may also be performed using any smooth surface, such as a bowl of liquid, a pond, or a crystal. Method[edit] The visions that scryers say they see may come from variations in the medium. In folklore[edit]

Ritual A priest elevates the Host during a Catholic Mass, one of the mostly widely performed rituals in the world. A ritual "is a sequence of activities involving gestures, words, and objects, performed in a sequestered place, and performed according to set sequence. Rituals of various kinds are a feature of almost all known human societies, past or present. The field of ritual studies has seen a number of conflicting definitions of the term. In psychology, the term ritual is sometimes used in a technical sense for a repetitive behavior systematically used by a person to neutralize or prevent anxiety; it is a symptom of obsessive–compulsive disorder. Etymology[edit] The English word "ritual" derives from the Latin ritualis, "that which pertains to rite (ritus)". Characteristics of ritual[edit] There are hardly any limits to the kind of actions that may be incorporated into a ritual. Formalism[edit] The use of Latin in a Tridentine Catholic Mass is an example of a "restricted code". Invariance[edit]