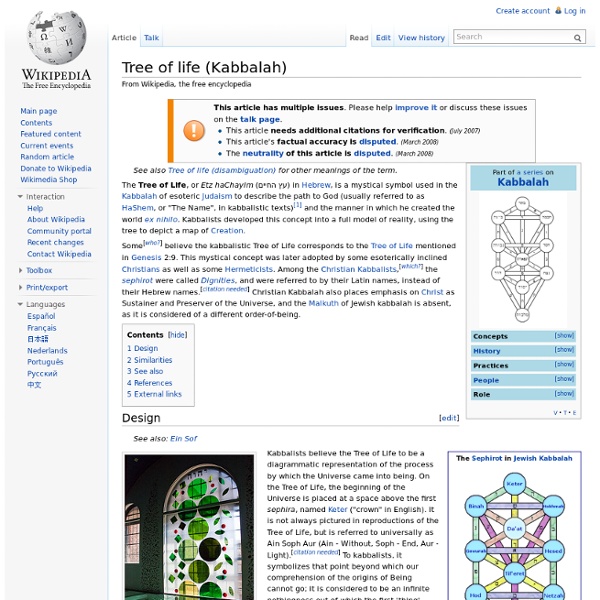 The Tree of Life, or Etz haChayim (עץ החיים) in Hebrew, is a classic descriptive term for the central mystical symbol used in the Kabbalah of esoteric Judaism, also known as the 10 Sephirot. Its diagrammatic representation, arranged in 3 columns/pillars, derives from Christian and esoteric sources and is not known to the earlier Jewish tradition.[citation needed] The tree, visually or conceptually, represents as a series of divine emanations God's creation itself ex nihilo, the nature of revealed divinity, the human soul, and the spiritual path of ascent by man. The symbolic configuration of 10 spiritual principles (11 can be shown, of which - Keter and Da'at are interchangeable), Jewish Kabbalah usually refers to the symbol as the 10 Sephirot, while non-Jewish Christian Cabala and Hermetic Qabalah generally terms it universally as the Cabalistic/Qabalistic Tree of Life. In Zoroastrianism: The sacred plant haoma and the drink made from it. Haoma is the Avestan form of the Sanskrit soma. Related:  kolek 1

Thoth Thoth Thoth was the God of Knowledge, the Moon, Measurement, Wisdom, the Alphabet, Records, Thought, Intelligence, Meditation, the Mind, Logic, Reason, Reading, Hieroglyphics, Magic, Secrets, Scribes, and Writing. He also went by other names in the myths of ancient civilizations. Thoth or Djehuti was one of the deities of the Egyptian pantheon. Thoth's chief temple was located in the city of Khmun, later called Hermopolis Magna during the Greco-Roman era (in reference to him through the Greeks' interpretation that he was the same as their god Hermes) and Shmounein in the Coptic rendering, and was partially destroyed in 1826. Thoth played many vital and prominent roles in Egyptian mythology, such as maintaining the universe, and being one of the two deities (the other being Ma'at) who stood on either side of Ra's boat. Thoth the Architect Thoth played a crucial role in the design and orientation of many famous pyramids, temples and ziggurats. design and orientation of the pyramids Allah

Christian Kabbalah The Renaissance saw the birth of Christian Kabbalah/Cabala (From the Hebrew קַבָּלָה "reception", often transliterated with a 'C' to distinguish it from Jewish Kabbalah and Hermetic Qabalah[1]), also spelled Cabbala. Interest grew among some Christian scholars in what they saw to be the mystical aspects of Judaic Kabbalah, which were compatible with Christian theology. Although somewhat obscure, the tradition of Christian Cabala or Catholic Cabala still persists today.[citation needed] Background[edit] The movement was influenced by a desire to interpret aspects of Christianity even more mystically than current Christian Mystics. After the 18th century, Kabbalah became blended with European occultism, some of which had a religious basis; but the main thrust of Christian Kabbalah was by then dead. Medieval precursors[edit] Blessed Raymond Llull[edit] Spanish conversos[edit] Christian Kabbalists[edit] Pico della Mirandola[edit] That could not be said of Reuchlin, Knorr von Rosenroth and Kemper.

DMT: The Spirit Molecule Hermetic Qabalah Teachings[edit] Conception of Divinity[edit] A primary concern of Hermetic Qabalah is the nature of divinity, its conception of which is quite markedly different from that presented in monotheistic religions; in particular there is not the strict separation between divinity and humankind which is seen in monotheisms.[2] Hermetic Qabalah holds to the neoplatonic conception that the manifest universe, of which material creation is a part, arose as a series of emanations from the godhead.[3] The Sephiroth in Hermetic Qabalah[edit] From Ain Suph Aur crystallises Kether, the first sephirah of the Hermetic Qabalistic tree of life. From Kether emanate the rest of the sephirot in turn, viz. Each sephirah is a nexus of divine energy and each has a number of attributions. Tarot and the Tree of Life[edit] Hermetic Qabalists see the cards of the tarot as keys to the Tree of Life. Relation to Western Magic, Alchemy and Astrology[edit] History[edit] Hermetic views of Qabalah origins[edit] See also[edit]

Free Kabbalah Course - Kabbalah Education Center, Bnei Baruch Every Wednesday for 12 Weeks 1) Introduction To Kabbalah What is (and is not) Kabbalah?What is Kabbalah’s purpose?Who is Kabbalah for? 2) Where Did You Come From? The ultimate contradiction about having a Creator: If there is a Creator that’s all good and loving, then why is there so much suffering? 3) Who Are You? How do you perceive reality? 4) Where Do Your Thoughts & Desires Come From? The Kabbalistic allegory about the host and the guest and how it relates to you.Three approaches to your thoughts & desires:1) Unconsciously being under their control, 2) Suppressing them, 3) Rising above them.How can you make a change? 5) The Language of Kabbalah: Roots and Branches What is the most common misconception about what the Bible and other Kabbalistic texts describe? 6) How To Make World Peace A Reality 7) Do You Have Free Will? Why do you want freedom in the first place, freedom from what? 8) Do You Have Free Will? What are the prerequisites for free will? What happened before the Big Bang?

There Is No Mistaking The Evidence; Cannabis Cures Cancer May 12, 2013 2012thebigpicture It's no coincidence that the government has tried to criminalize the use of marijuana and growing the hemp plant. They know it's a miracle vegetable and that it's helping people to either deal with health issues or cure ---YES, I SAID CURE---diseases the allopathic medical community has chosen to exacerbate through the use of costly, toxic drugs and cocktails that create more health issues than they resolve. While smoking the dried leaves of the cannabis is not recommended, the phenomenal benefits of ingesting the raw plant or the oils derived from it are well documented. Our dog went through an emergency integrative cancer treatment protocol which served its purpose, but now he's on a homemade diet mixed with a little healthy kibble, organic green powders, probiotics, oregano oil and hemp oil. I've posted about this before, and I'm doing it again. Cannabis is one of the most powerful healing plants in the world and it makes cancer essentially disappear.

Tree of Life From Thelemapedia Categories: Qabalah | Tree of Life The Tree of Life is a tool used to categorize and organize various mystical concepts, and is central to the teachings of Aleister Crowley and the Qabalah. Within the western magical tradition, the Tree is used as a kind of conceptual filing cabinet. Parts of the Tree of Life The Negative Veils Ain, "Nothing" Ain Soph, "The Boundless" Ain Soph Aur, "The Limitless Light" Sephiroth (Emanations) Kether, "Crown" Chokmah, "Wisdom" Binah, "Understanding" Chesed, "Mercy" Geburah, "Strength" Tiphareth, "Beauty" Netzach, "Victory" Hod, "Splendour" Yesod, "The Foundation" Malkuth, "The Kingdom" There is also the "false" sephira, Daath, or Knowledge. The Paths There are 22 paths that connect the ten sephiroth. The Veils The Pillars The vertical columns of the sephiroth form three "pillars": - Further Reading: See The Middle Pillar by Israel Regardie chapters 2 & 3 The Triplicities Above the physical world of Malkuth, there are three sets of three sephiroth:

Marijuana doesn't appear to harm lung function, study finds Smoking a joint once a week or a bit more apparently doesn't harm the lungs, suggests a 20-year study that bolsters evidence that marijuana doesn't do the kind of damage tobacco does. The results, from one of the largest and longest studies on the health effects of marijuana, are hazier for heavy users - those who smoke two or more joints daily for several years. The data suggest that using marijuana that often might cause a decline in lung function, but there weren't enough heavy users among the 5,000 young adults in the study to draw firm conclusions. Smoking marijuana as often as one joint daily for seven years, or one joint weekly for 20 years was not linked with worse lung function Still, the authors recommended "caution and moderation when marijuana use is considered." Marijuana is an illegal drug under federal law although some states allow its use for medical purposes. Study co-author Dr. The analyses showed pot didn't appear to harm lung function, but cigarettes did.

The 72 Names of God | The Kabbalah Centre The ancient Kabbalist Rav Shimon bar Yochai wrote in the Zohar that it was Moses, not God, who parted the Red Sea, allowing the Israelites to narrowly escape Pharaoh and the Egyptian army. In order to accomplish this miracle, Moses combined the power of certainty with a very powerful spiritual technology. He had possession of a formula that literally gave him access to the subatomic realm of nature. The formula Moses used to overcome the laws of nature has been hidden in the Zohar for 2000 years. This formula is called the 72 Names of God. Though this formula is encoded in the literal Biblical story of the parting of the Red Sea, no rabbi, scholar, or priest was aware of the secret. To learn how to wield the power of the 72 Names, together with the purposes of which they can be used, we recommend reading The 72 Names of God: Technology of the Soul. The 72 Names are each 3-letter sequences that act like an index to specific, spiritual frequencies.

Understanding the Hemp Plant and its 50,000 Uses and Benefits!