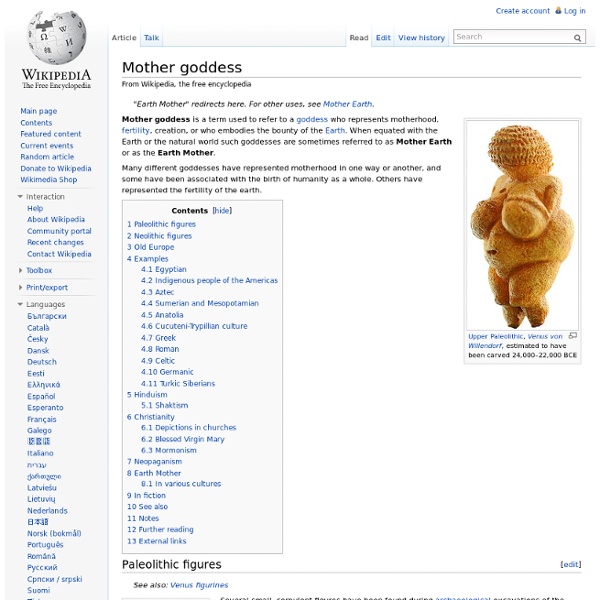 Mother goddess is a term used to refer to a goddess who represents and/or is a personification of nature, motherhood, fertility, creation, destruction or who embodies the bounty of the Earth. When equated with the Earth or the natural world, such goddesses are sometimes referred to as Mother Earth or as the Earth Mother. Many different goddesses have represented motherhood in one way or another, and some have been associated with the birth of humanity as a whole, along with the universe and everything in it. Others have represented the fertility of the earth. Paleolithic figures[edit] The Venus of Dolní Věstonice, one of the earliest known depictions of the human body, dates to approximately 29,000–25,000 BC (Gravettian culture of the Upper Paleolithic era) Neolithic figures[edit] "Bird Lady" a Neolithic Egyptian ceramic, Naganda IIa Predynastic 3500-3400 BCE, Brooklyn Museum Old Europe[edit] Examples[edit] Egyptian[edit] Indigenous people of the Americas[edit] Aztec[edit] Anatolia[edit]

Artemis In the classical period of Greek mythology, Artemis (Ancient Greek: Ἄρτεμις) was often described as the daughter of Zeus and Leto, and the twin sister of Apollo. She was the Hellenic goddess of the hunt, wild animals, wilderness, childbirth, virginity and protector of young girls, bringing and relieving disease in women; she often was depicted as a huntress carrying a bow and arrows.[6] The deer and the cypress were sacred to her. In later Hellenistic times, she even assumed the ancient role of Eileithyia in aiding childbirth. Etymology Didrachm from Ephesus, Ionia, representing the goddess Artemis Silver tetradrachm of the Indo-Greek king Artemidoros (whose name means "gift of Artemis"), c. 85 BCE, featuring Artemis with a drawn bow and a quiver on her back on the reverse of the coin Artemis in mythology Leto bore Apollon and Artemis, delighting in arrows, Both of lovely shape like none of the heavenly gods, As she joined in love to the Aegis-bearing ruler. Birth Childhood Intimacy Actaeon

Dying god The methods of death can be diverse, the Norse Baldr mistakenly dies by the arrow of his blind brother, the Aztec Quetzalcoatl sets himself on fire after over-drinking, and the Japanese Izanami dies of a fever.[2][15] Some gods who die are also seen as either returning or bringing about life in some other form, in many cases associated with a vegetation deity related to a staple.[2][16] The very existence of the category "dying-and-rising-god" was debated throughout the 20th century, and the soundness of the category was widely questioned, given that many of the proposed gods did not return in a permanent sense as the same deity.[1][2][17] By the end of the 20th century, scholarly consensus had formed against the reasoning used to suggest the category, and it was generally considered inappropriate from a historical perspective.[2][18] Overview[edit] Odin whispering to a dead Baldr as he is to be sent out to sea Development of the concept[edit] Myth theorist Robert M. See also[edit]

Isis Temple of Isis in Philae, Egypt Isis (Ancient Greek: Ἶσις, original Egyptian pronunciation more likely "Aset" or "Iset") is a goddess in Ancient Egyptian religious beliefs, whose worship spread throughout the Greco-Roman world. She was worshipped as the ideal mother and wife as well as the patroness of nature and magic. She was the friend of slaves, sinners, artisans and the downtrodden, but she also listened to the prayers of the wealthy, maidens, aristocrats and rulers.[1] Isis is often depicted as the mother of Horus, the hawk-headed god of war and protection (although in some traditions Horus's mother was Hathor). This myth became very important during the Greco-Roman period. Etymology[edit] The name Isis is the Greek version of her name, with a final -s added to the original Egyptian form because of the grammatical requirements of the Greek language (-s often being a marker of the nominative case in ancient Greek). Principal features of the cult[edit] Origins[edit] Iconography[edit]

Ysbaddaden Ysbaddaden props up his eyelids (Illustration by John D. Batten, 1892) Culhwch at Ysbadadden's court. Image by E. Wallcousins in "Celtic Myth & Legend", Charles Squire, 1920. "Horses shall I have, and chivalry; and my Lord and kinsman Arthur will obtain for me all these things. Arthur agrees to help, and sends six warriors to join Culhwch in his search for daughter Olwen. The Knights attack the Castle by stealth, killing the nine porters and the nine watchdogs, and enter the giant's hall. With the anoethau completed, Culhwch, Goreu and others who "wished ill to Ysbaddaden Bencawr" ride to his court.

Year and a day rule The year and a day rule has been a common traditional length of time for establishing differences in legal status. The phrase "year and a day rule" is associated with the former common law standard that death could not be legally attributed to acts or omissions that occurred more than a year and a day before the death. It is elsewhere associated with the minimum sentence for a crime to count as a felony. The rule and homicide[edit] In English common law, it was held that a death was conclusively presumed not to be murder (or any other homicide) if it occurred more than a year and one day since the act (or omission) that was alleged to have been its cause. The rule also applied to the offence of assisting with a suicide. Certain problems with this rule arise from the advance of medicine. England and Wales[edit] New Zealand[edit] The rule still exists in New Zealand and is codified in the Crimes Act 1961.[1] United States[edit] Where the rule is not applied to homicide[edit] South Africa Ireland

Toci Toci (Nahuatl pronunciation: [ˈtosi] "Our grandmother")[1] is a deity figuring prominently in the religion and mythology of the pre-Columbian Aztec civilization of Mesoamerica. In Aztec mythology she is attributed as the "Mother of the Gods" (Teteo Innan[2] or Teteoinnan), and associated as a Mother goddess (also called Tlalli Iyollo, "Heart of the Earth"). Characteristics and associations[edit] Although considered to be an aged deity, Toci is not always shown with specific markers of great age. Toci was also associated with healing, and venerated by curers of ailments and midwifes. Toci also had an identification with war, and had also the epithet "Woman of Discord". Traditions in mythology[edit] Festivals and rites[edit] During the veintena of Ochpaniztli in the Aztec calendar, harvest-time festival rites were held to honor Toci, in her aspect as "Heart of the Earth" (Miller and Taube 1993) were held, associated with the time of harvest. See also[edit] Notes[edit] References[edit]

Giants (Welsh folklore) In the Mabinogi of Branwen ferch Llyr, Britain is ruled by the giant Bran the Blessed, who has never been able to fit inside any dwelling. In Culhwch and Olwen, giants feature as antagonists throughout. Ysbaddaden, chief of giants, is the father of Olwen, a beautiful maiden sought by Culhwch fab Cilydd, a cousin of King Arthur's. He is slain at the tale's close by his nephew Goreu fab Custennin,[2] while Wrnach, another giant, is killed by Cei. A well-known tale concerns Rhitta (or Rhudda) Gawr, a giant who held court in Snowdonia. He marched against warring kings Nyniaw and Peibaw, overwhelmed their armies and took their beards as trophies of his victory and fashioned them into a cap for himself. Maelor Gawr, the giant of Castell Maelor, was captured in Cyfeilog, about twelve miles from his own castle and was sentenced to death. Maelor's son, Cornippin, who was hunting with his horse and his hound, heard the sound of his father's hand and lamented over his suffering.