Why is the drinking age in our country 21? 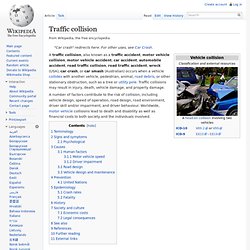 Traffic collisions may result in injury, death, vehicle damage, and property damage. A number of factors contribute to the risk of collision, including vehicle design, speed of operation, road design, road environment, driver skill and/or impairment, and driver behaviour. Worldwide, motor vehicle collisions lead to death and disability as well as financial costs to both society and the individuals involved. Terminology[edit] Traffic collision Traffic collisions can be classified by general type. Many different terms are commonly used to describe vehicle collisions.

Signs and symptoms[edit] Psychological[edit] File:Alcohol diagram.png. Color Scheme with #993300 #99CC99 #003366. Chart for project - Google Sheets. Talking Points/Arguments. Talking Points/Arguments: Answering the Critics of Age-21 State Age-21 laws are one of the most effective public policies ever implemented in the Nation...I am chagrined to report that some supposedly responsible officials would like to repeal them.(1) Jim Hall, Chairman National Transportation Safety Board Argument Lowering the drinking age will reduce the allure of alcohol as a "forbidden fruit" for minors. 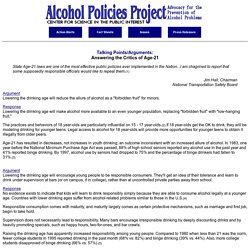 Response Lowering the drinking age will make alcohol more available to an even younger population, replacing "forbidden fruit" with "low-hanging fruit. " The practices and behaviors of 18 year-olds are particularly influential on 15 - 17 year-olds.(2) If 18 year-olds get the OK to drink, they will be modeling drinking for younger teens. Legal access to alcohol for 18 year-olds will provide more opportunities for younger teens to obtain it illegally from older peers. Contreras U W03 Gatheringinformation. How Much is Too Much? 809860.pdf. CollegeStudents.pdf.

A Lower Age Would Be Unsafe. As the fall semester begins at colleges across the country, campuses once again face the challenge of combating underage and binge drinking. 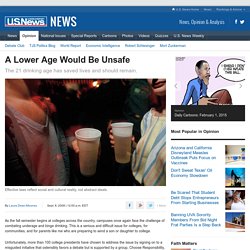 This is a serious and difficult issue for colleges, for communities, and for parents like me who are preparing to send a son or daughter to college. Unfortunately, more than 100 college presidents have chosen to address the issue by signing on to a misguided initiative that ostensibly favors a debate but is supported by a group, Choose Responsibility, whose sole aim is lowering the drinking age from 21 to 18 years old. Mothers Against Drunk Driving is open to a discussion about solving the problems of underage and binge drinking.

But the discussion must be based on facts, and, in this case, the facts are clear: 21 saves lives. Since states began setting the legal drinking age at 21, the law has been one of the most studied in our history. A neurotoxin. A person's brain does not stop developing until their early to mid-20s. Keeping Legal Drinking Age At 21 Saves 900 Lives Yearly: Study. By Bahar Gholipour, Staff Writer Published: 02/24/2014 07:07 AM EST on LiveScience Laws that maintain the legal drinking age at 21 save lives on the road, and protect young people from other hazards of drinking, according to a new review of studies. 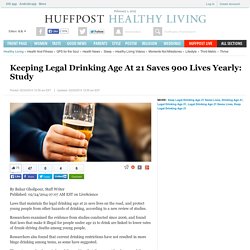 Researchers examined the evidence from studies conducted since 2006, and found that laws that make it illegal for people under age 21 to drink are linked to lower rates of drunk-driving deaths among young people. POV: Legal Drinking Age of 21 Works. Deal with It. Public health researchers were taken aback in 2008 when more than 100 college and university presidents announced their opposition to the legal drinking age of 21. 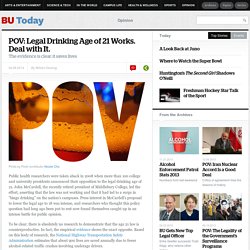 John McCardell, the recently retired president of Middlebury College, led the effort, asserting that the law was not working and that it had led to a surge in “binge drinking” on the nation’s campuses. Press interest in McCardell’s proposal to lower the legal age to 18 was intense, and researchers who thought this policy question had long ago been put to rest now found themselves caught up in an intense battle for public opinion. To be clear, there is absolutely no research to demonstrate that the age 21 law is counterproductive. In fact, the empirical evidence shows the exact opposite.

Based on this body of research, the National Highway Transportation Safety Administration estimates that about 900 lives are saved annually due to fewer alcohol-related traffic crashes involving underage drivers. Fact Sheets-Minimum Legal Drinking Age - Alcohol. MLDA_Fact_sheet.pdf. Fact Sheets-Minimum Legal Drinking Age - Alcohol. Why 21. Addressing Underage Drinking More than 25,000 lives1,2 have been saved in the U.S. thanks to the 21 Minimum Legal Drinking Age.10,11 This law continues to prevent tragedies—decreasing crashes by an estimated 16 percent9 and keeping young people safer from many risks.13 Sometimes, without knowing all the facts, people assert that youth shouldn’t have to wait until they’re 21 to drink. 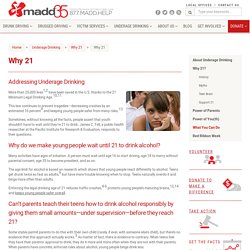 James C. Fell, a public health researcher at the Pacific Institute for Research & Evaluation, responds to their questions. Why do we make young people wait until 21 to drink alcohol? Many activities have ages of initiation. Teens: Alcohol And Other Drugs. No. 3: Updated July 2013Click here to download and print a PDF version of this document. 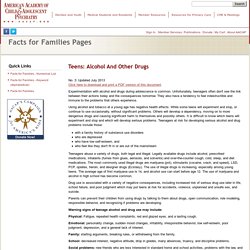 Experimentation with alcohol and drugs during adolescence is common. Unfortunately, teenagers often don't see the link between their actions today and the consequences tomorrow. They also have a tendency to feel indestructible and immune to the problems that others experience. Using alcohol and tobacco at a young age has negative health effects. CSPI: Fact Sheet. Fact Sheet: Lowering the Minimum Drinking Age Is a Bad Idea State Age-21 laws are one of the most effective public policies ever implemented in the Nation...I am chagrined to report that some supposedly responsible officials would like to repeal them.(1) Jim Hall, Chairman National Transportation Safety Board In 1984, Congress passed the National Minimum Purchase Age Act, to encourage each state to enact a minimum legal purchase age (MLPA) of 21 by 1986. 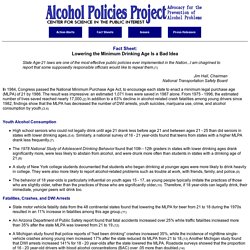 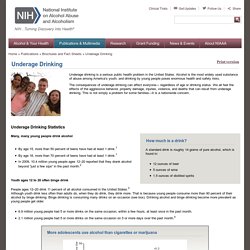 Alcohol is the most widely used substance of abuse among America’s youth, and drinking by young people poses enormous health and safety risks. The consequences of underage drinking can affect everyone— regardless of age or drinking status. We all feel the effects of the aggressive behavior, property damage, injuries, violence, and deaths that can result from underage drinking.

This is not simply a problem for some families—it is a nationwide concern. 11 Facts About Teens And Alcohol. Real Facts About Underage Drinking. You probably see and hear a lot about alcohol—from TV, movies, music, and your friends. 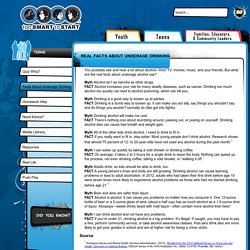 But what are the real facts about underage alcohol use? Myth Alcohol isn’t as harmful as other drugs. FACT Alcohol increases your risk for many deadly diseases, such as cancer. How Does Alcohol Affect the Brain? Effects of Alcohol on Teenagers - Drug-Free World. Photo credits: Stockxpert A young person’s body cannot cope with alcohol the same way an adult’s can. Drinking is more harmful to teens than adults because their brains are still developing throughout adolescence and well into young adulthood. Facts About Alcohol. Here are answers to some of the most common questions about underage drinking and resources where you can get more information. What Is Underage Drinking? Why Is Underage Drinking Dangerous?