“The will is everything. 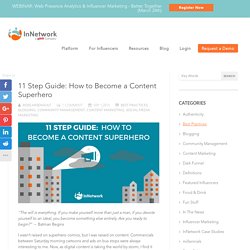 If you make yourself more than just a man, if you devote yourself to an ideal, you become something else entirely. Are you ready to begin?” “As the financial markets continue their transformation to the digital native age, we will see a growing appetite on asset classes across the board. 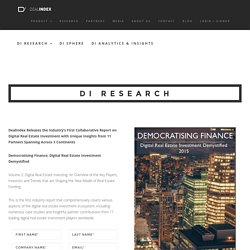 Brick and mortar is widely understood and recognised, but bringing a traditional asset class to a novel online platform requires a new way of thinking from the entire market.” Markus Lampinen, Co-founder & CEO, Crowd Valley “We are delighted to be able to contribute to this report, which offers a relevant and comprehensive assessment of the global property crowdfunding industry and its impact on traditional forms of property investment, for the very first time. Crowdsourcing Landscape v2. Receptiviti Labs- Login. The Social Media Life-Cycle Is it too late? 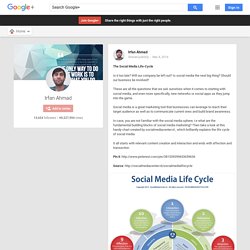 Will our company be left out? Is social media the next big thing? Should our business be involved? These are all the questions that we ask ourselves when it comes to starting with social media, and even more specifically, new networks or social apps as they jump into the game. Social media is a great marketing tool that businesses can leverage to reach their target audience as well as to communicate current ones and build brand awareness.

The United States economy makes up about 23.3% of global output and boasts annual economic productivity of $17.3 trillion. 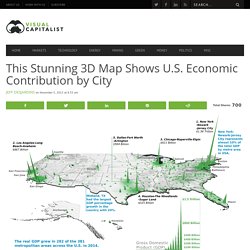 In the past, we’ve shown a visualization comparing all of the world’s economies, a direct comparison between the economies of the United States and China, and even the U.S. GDP by a state-by-state comparison. Today’s 3d visualization, using recent data from the U.S. Bureau of Economic Analysis, shows the country’s economy based on the relative economic output of each metropolitan area. The results show how much cities and populous areas really contribute to a country’s output, with an impressive 52% of total GDP created in America’s 20 top metropolitan areas. New York City’s metropolitan area, which includes Newark and Jersey City, alone makes up $1.5 trillion of economic productivity. The Greater Los Angeles area was the second largest individual contributor with $866 billion in GDP, and Chicago’s metropolitan area adds $610 billion to the U.S. Untitled. November 4, 2014 In a networked age, creating a digital professional learning network (DPLN) is a pressing necessity for teachers and educators. 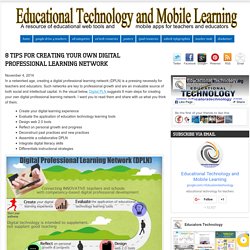 Such networks are key to professional growth and are an invaluable source of both social and intellectual capital. In the visual below, Digital PLN suggests 8 main steps for creating your own digital professional learning network. I want you to read them and share with us what you think of them. Create your digital learning experienceEvaluate the application of education technology learning toolsDesign web 2.0 toolsReflect on personal growth and progressDeconstruct past practices and new practicesAssemble a collaborative DPLNIntegrate digital literacy skillsDifferentiale instructional strategies.

Bringing Strategy To Life — The A-Z Of Group Partners. Enabling Through Visualisation: In the creation of these we work with teams in a very collaborative and creative way — building the architecture visually — we can get a very long way this way — but these ‘sessions and workshops’ are never the right occasions to make things concrete — there’s always major value in further reflection and additional perspective. 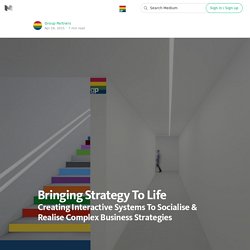 Often there’s more data to be obtained. It’s also really important that we simplify the more creative process of co-creation and reduce the raw material into more meaningful deliverables. The four reasons most cited by corporate leaders for failed acquisitions involve what happens after a deal closes: integration, complexity, cultural fit, and low synergies. 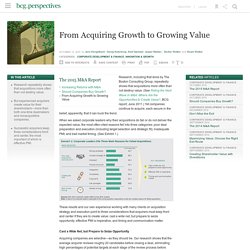 As we have written before, many companies struggle to integrate fully after the deal. Synergy targets that were so enticing in the run-up to the deal melt away under the realities of meshing two often very different organizations in a short time. (See Enabling PMI: Building Capabilities for Effective Integration, BCG Focus, July 2012.) This should not be surprising. For the vast majority of companies, acquisitions are infrequent events. 4Faculty. One lesson we have learned is that we all learn differently. 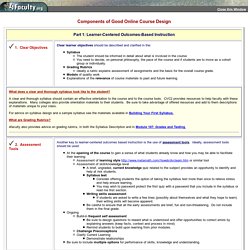 It is very important to be clear about this. The process by which we learn something and the outcome of that learning are not the same. For example, some students need to "read the manual" and reflect upon their reading before they can think about assembling a computer. Other students only need to watch you (or a video) once, and they can replicate assembly. “A learning and performance ecosystem introduces new capabilities that integrate learning and performance solutions into the work environment, where the vast preponderance of learning actually takes place. 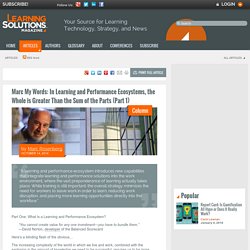 While training is still important, the overall strategy minimizes the need for workers to leave work in order to learn, reducing work disruption, and placing more learning opportunities directly into the workflow.” Part One: What Is a Learning and Performance Ecosystem? “You cannot create value for any one investment—you have to bundle them.” —David Norton, developer of the Balanced Scorecard Here’s a blinding flash of the obvious…