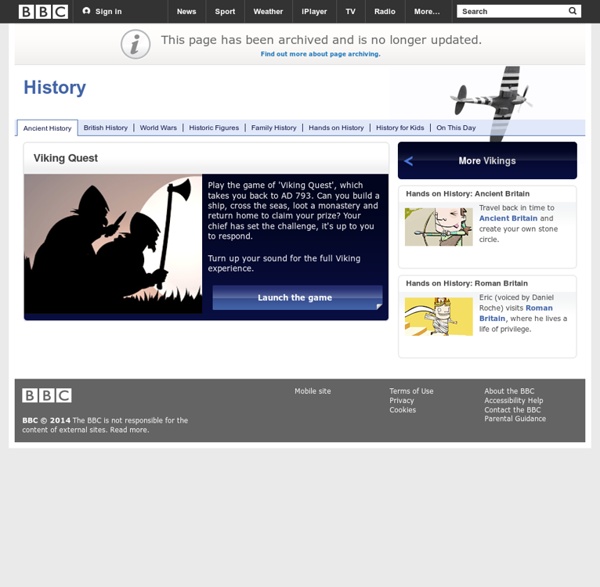 Viking Longships - Children's British History Encyclopedia Many Vikings were good sailors because they lived close to rivers and fjords (sea inlets). They grew up from childhood able to use ships for fishing and travelling. A big Viking longship would be about 30 metres long and were made from overlapping planks of oak wood joined together with iron rivets (bits of metal hammered into holes). Each ship could carry 60 men. Sea-chests were used to sit on when rowing and to store personal belongings. The sails were brightly coloured in stripes or diamond patterns. The Vikings loved to decorate their ships with fine wooden carvings. The ship was steered by means of a rudder, mounted on the side, near to the back of the ship. They used the: sun, moon and stars to help them navigate. The Vikings gave their ships names like: Long Serpent, Raven of the Wind or Snake of the Sea.

Games and Animations Welcome to the Best of History Web Sites Games and Animations section. Below you will find an annotated list of fun history games and animations organized around broad historical periods. Most of these games and animation are aimed at students ages 10-16. We hope you enjoy these selections and encourage you to submit a recommended history game or animation to us via the contact form. Ancient History Games and Animations Gladiator: Dressed to Kill This game has the player choose the correct armor for three different types of Roman gladiators within a time limit. Housesteads Fort This is a 3D tour of a reconstruction of a Roman fort along Hadrian’s Wall in Ancient Britain. Mt. The Mummy Maker Test your knowledge of history with an interactive challenge. Roman Villa This is an interactive reconstruction of a Roman villa viewed in Google Earth. Death in Rome This game presents the user with a scene where a Roman dies and the user then has to figure out how the Roman died. Pirates! U.S. U.S.

Vikings - Exploration The mid-10th-century reign of Harald Bluetooth as king of a newly unified, powerful and Christianized Denmark marked the beginning of a second Viking age. Large-scale raids, often organized by royal leaders, hit the coasts of Europe and especially England, where the line of kings descended from Alfred the Great was faltering. Harald’s rebellious son, Sven Forkbeard, led Viking raids on England beginning in 991 and conquered the entire kingdom in 1013, sending King Ethelred into exile. After Knut’s death, his two sons succeeded him, but both were dead by 1042 and Edward the Confessor, son of the previous (non-Danish) king, returned from exile and regained the English throne from the Danes.

Vikings Homework Help Where did the Vikings settle in Britain? The area eventually settled by Vikings was called the Danelaw. It formed a boundary separating Anglo-Saxon England from Viking England and was defined in a treaty between the English King Alfred and Viking King Guthrum in AD 880. It lay north of Watling Street, a Roman road running from London north-west to Chester and covered northern and eastern England. It included counties north of an imaginary line running from London to Bedford and then up to Chester. The Vikings settled in: Islands off the coast of Scotland - Shetland, Orkney and The Hebrides Around the north and north west coast of Scotland Parts of Ireland - Dublin is a Viking city The Isle of Man Small parts of Wales Parts of England known as Danelaw Place Names We can tell where the Vikings settled by place names of towns and villages today. Place names ending in –by eg. Derby - A village where deer are found Place names ending in –thorpe (or -thorp, -throp or –trop) eg. Viking Words

The Amazing Vikings Ravagers, despoilers, pagans, heathens--such epithets pretty well summed up the Vikings for those who lived in the British Isles during medieval times. For hundreds of years after their bloody appearance at the end of the 8th century A.D., these ruthless raiders would periodically sweep in from the sea to kill, plunder and destroy, essentially at will. "From the fury of the Northmen, deliver us, O Lord" was a prayer uttered frequently and fervently at the close of the first millennium. But that view is wildly skewed. The broad outlines of Viking culture and achievement have been known to experts for decades, but a spate of new scholarship, based largely on archaeological excavations in Europe, Iceland, Greenland and Canada, has begun to fill in the elusive details. In doing so, the curators have laid to rest a number of popular misconceptions, including one they perpetuate in the show's title. Nor were the Norse any less sophisticated than other Europeans.

The Vikings - Britons, Gaels, Picts, Angles and Vikings The Vikings were Norsemen who came to raid and pillage, to trade and to settle in Scotland. They were expert sailors who made their way across the treacherous North Sea in longships from Norway and Denmark from the late 8th century. The Vikings sailed as far west as Greenland and North America. The pagan Vikings raided Christian monasteries in search of gold and silver, food and slaves. Monks wrote in horror of their attacks – seeing dreadful omens in the sky. In this year terrible portents appeared over Northumbria and sadly affrightened the inhabitants: there were exceptional flashes of lightning, and fiery dragons were seen flying in the air. Anglo-Saxon Chronicle, AD 793 The Norse began to settle in Scotland and gradually merged with the local people. Before the Vikings came as raiders their ancestors were probably traders who visited Scotland.

Boy finds treasure linked to Viking king 'Harald Bluetooth' on Baltic island Updated Tue at 2:47amTue 17 Apr 2018, 2:47am Hundreds of 1,000-year-old silver coins, rings, pearls and bracelets linked to the era of Danish King Harald Gormsson have been found on the northern German island of Ruegen in the Baltic Sea. A single silver coin was first found in January by two amateur archaeologists, one of them a 13-year-old boy, in a field near the village of Schaprode. The state archaeology office then became involved and the entire treasure was uncovered by experts over the weekend, the Mecklenburg-West Pomerania state archaeology office said. "It's the biggest trove of such coins in the south-eastern Baltic region," the statement said. The office said the two amateur archaeologists were asked to keep quiet about their discovery to give professionals time to plan the dig and were then invited to participate in the recovery. "This was the [biggest] discovery of my life," hobby archaeologist Rene Schoen told the German news agency dpa. Topics: archaeology, history, germany