The Age of Taurus (The Taurean Age)

Marduk. Marduk (Sumerian spelling in Akkadian: AMAR.UTU 𒀫𒌓 "solar calf"; perhaps from MERI.DUG; Biblical Hebrew מְרֹדַךְ Merodach; Greek Μαρδοχαῖος,[1] Mardochaios) was the Babylonian name of a late-generation god from ancient Mesopotamia and patron deity of the city of Babylon, who, when Babylon became the political center of the Euphrates valley in the time of Hammurabi (18th century BCE), started to slowly rise to the position of the head of the Babylonian pantheon, a position he fully acquired by the second half of the second millennium BCE. 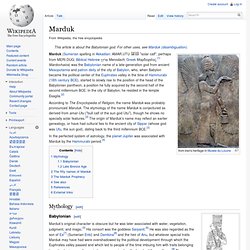 Crete. Assyria. Overview map of the Ancient Near East in the 15th century BC (Middle Assyrian period), showing the core territory of Assyria with its two major cities Assur and Nineveh wedged between Babylonia downstream (to the south-east) and the states of Mitanni and Hatti upstream (to the north-west). 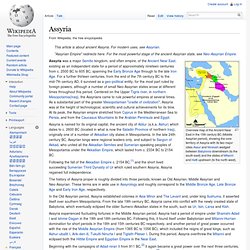 Assyria was a major Semitic kingdom, and often empire, of the Ancient Near East, existing as an independent state for a period of approximately nineteen centuries from c. 2500 BC to 605 BC, spanning the Early Bronze Age through to the late Iron Age. For a further thirteen centuries, from the end of the 7th century BC to the mid-7th century AD, it survived as a geo-political entity, for the most part ruled by foreign powers, although a number of small Neo-Assyrian states arose at different times throughout this period. Centered on the Upper Tigris river, in northern Mesopotamia(Iraq), the Assyrians came to rule powerful empires at several times. Names[edit] Egyptian pyramids. A view of the pyramids at Giza from the plateau to the south of the complex. 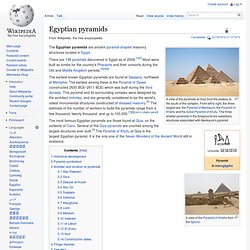 From left to right, the three largest are: the Pyramid of Menkaure, the Pyramid of Khafre and the Great Pyramid of Khufu. The three smaller pyramids in the foreground are subsidiary structures associated with Menkaure's pyramid. There are 138 pyramids discovered in Egypt as of 2008.[1][2] Most were built as tombs for the country's Pharaohs and their consorts during the Old and Middle Kingdom periods.[3][4][5] Old Kingdom. The Old Kingdom is the name given to the period in the 3rd millennium BC when Egypt attained its first continuous peak of civilization – the first of three so-called "Kingdom" periods, which mark the high points of civilization in the lower Nile Valley (the others being Middle Kingdom and the New Kingdom). 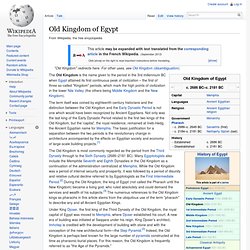 The term itself was coined by eighteenth-century historians and the distinction between the Old Kingdom and the Early Dynastic Period is not one which would have been recognized by Ancient Egyptians. Not only was the last king of the Early Dynastic Period related to the first two kings of the Old Kingdom, but the 'capital', the royal residence, remained at Ineb-Hedg, the Ancient Egyptian name for Memphis. The basic justification for a separation between the two periods is the revolutionary change in architecture accompanied by the effects on Egyptian society and economy of large-scale building projects.[1] Third Dynasty[edit] Fourth Dynasty[edit] Fifth Dynasty[edit] Sixth Dynasty[edit] Middle Kingdom of Egypt. Great Pyramid of Giza. Bull (mythology) Stone Age[edit] Aurochs are depicted in many Paleolithic European cave paintings such as those found at Lascaux and Livernon in France. 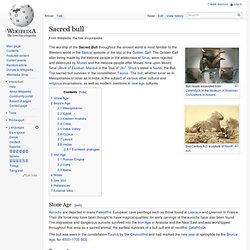 Their life force may have been thought to have magical qualities, for early carvings of the aurochs have also been found. The impressive and dangerous aurochs survived into the Iron Age in Anatolia and the Near East and was worshipped throughout that area as a sacred animal; the earliest survivals of a bull cult are at neolithic Çatalhöyük.

Bronze Age[edit] Ankh. Ankh It represents the concept of eternal life, which is the general meaning of the symbol. 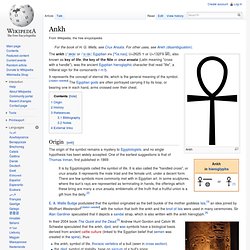 [citation needed] The Egyptian gods are often portrayed carrying it by its loop, or bearing one in each hand, arms crossed over their chest. Origin[edit] The origin of the symbol remains a mystery to Egyptologists, and no single hypothesis has been widely accepted. One of the earliest suggestions is that of Thomas Inman, first published in 1869: It is by Egyptologists called the symbol of life. An ankh-shaped mirror case History[edit] A symbol similar to the ankh appears frequently in Minoan and Mycenaean sites.