Novgorod First Chronicle. Oleg of Novgorod. He is credited by with moving the capital of Rus' from Novgorod the Great to Kiev and, in doing so, he laid the foundation of the powerful state of Kievan Rus'. 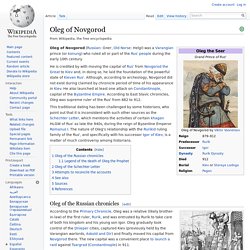 Although, according to archeology, Novgorod did not exist during claimed by chronicle period of time of his appearance in Kiev. He also launched at least one attack on Constantinople, capital of the Byzantine Empire. According to East Slavic chronicles, Oleg was supreme ruler of the Rus' from 882 to 912. Varangian DNA - Looking for the Evidence. Rurik of Novgorod and the Varangian DNA by Jennifer Baker After watching a documentry on Family history and DNA tracing, I started to look into it and stumbled apon the fact that there is a Varangain DNA code that they have found which has been linked to Rurik of Novgorod the first Varanian Rus Ruler in Russia. 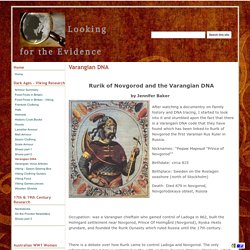 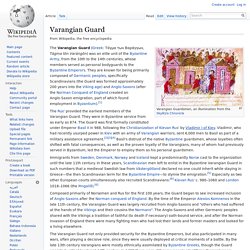 They are known for being primarily composed of Germanic peoples, specifically Scandinavians (the Guard was formed approximately 200 years into the Viking age) and Anglo-Saxons (after the Norman Conquest of England created an Anglo-Saxon emigration, part of which found employment in Byzantium).[1] The Rus' provided the earliest members of the Varangian Guard. They were in Byzantine service from as early as 874. Vikings as Traders. When the Vikings left their homelands in the beginning of the Viking Age in the 790s, they didn’t just go to raid and loot. 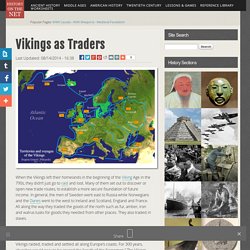 Many of them set out to discover or open new trade routes, to establish a more secure foundation of future income. In general, the men of Sweden went east to Russia while Norwegians and the Danes went to the west to Ireland and Scotland, England and France. All along the way they traded the goods of the north such as fur, amber, iron and walrus tusks for goods they needed from other places. They also traded in slaves. Western Trade Vikings raided, traded and settled all along Europe’s coasts. Vikings established home bases and trade centers in both Dublin, Ireland and York, England. 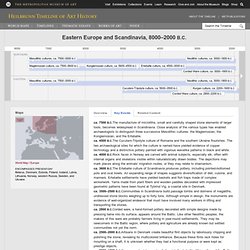 Although these developments are conventionally linked with the growth of settled village life, the inhabitants of Scandinavia and eastern Europe seem to have retained seasonal dwellings and a hunter's way of life even after they became successful part-time farmers. ca. 7500 B.C.The manufacture of microliths, small and carefully shaped stone elements of larger tools, becomes widespread in Scandinavia. Norse Mythology - Ancinet-Mythology.com. Viking Sources in Translation: Homepage. Under construction. 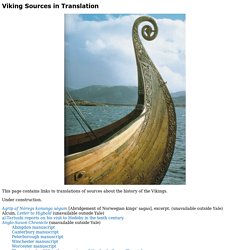 Thor's Hammer. The Story of the Volsungs (Volsunga Saga) Online Medieval and Classical Library Release #29 Originally written in Icelandic (Old Norse) in the thirteenth century A.D., by an unknown hand. 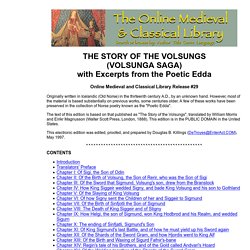 Excavating Past Population Structures by Surname-Based Sampling: The Genetic Legacy of the Vikings in Northwest England. + Author Affiliations Email: maj4@leicester.ac.uk. 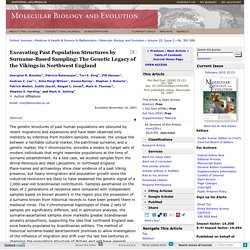 Accepted November 14, 2007. Abstract The genetic structures of past human populations are obscured by recent migrations and expansions and have been observed only indirectly by inference from modern samples. However, the unique link between a heritable cultural marker, the patrilineal surname, and a genetic marker, the Y chromosome, provides a means to target sets of modern individuals that might resemble populations at the time of surname establishment. Danish Church Wall Paintings - Danske Kalkmalerier - Fullscreen QTVR photos - 360 grader panorama foto. Denmark probably has the largest amount of mediveal wall paintings in Europe. 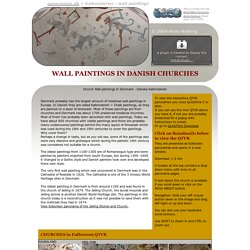 In Danish they are called Kalkmalerier = Chalk paintings, as they are painted on a layer of limewash. Most of these paintings are from churches and Denmark has about 1700 preserved medieval churches. Most of them has probably been decorated with wall paintings. Today we have about 600 churches with visible paintings and there are probably many undiscovered paintings behind the many layers of limewash which was used during the 18th and 19th centuries to cover the paintings.

Why cover them? The oldest paintings from 1100-1300 are of Romanesque type and were painted by painters imported from south Europe, but during 1300 -1600 it changed to a Gothic style and Danish painters took over and developed there own style. Viking Identities: Scandinavian Jewellery in England - Jane F. Kershaw. 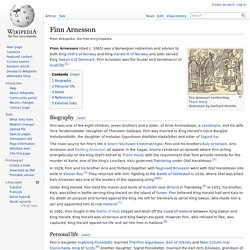 Finn Arnesson was the feudal lord (lendmann) of Austrått.[1] Biography[edit] Finn was one of the eight children, seven brothers and a sister, of Arne Arnmodsson, a Lendmann, and his wife Tora Torsteinsdatter (daughter of Thorstein Gallows). Finn was married to King Harald's niece Bergljot Halvdansdottir, the daughter of Halvdan Sigurdsson (Halfdan Hadafylke) and sister of Sigurd Syr. The main source for Finn's life is Snorri Sturluson's Heimskringla. In 1028, Finn and his brother Arni and Torberg together with Rognvald Brusason went with Olaf Haraldsson into exile in Kievan Rus.[3] They returned with him, fighting at the Battle of Stiklestad in 1030, where Olaf was killed. Personal life[edit] Notes[edit] References[edit] Viking Sources in Translation: Homepage. Medieval Icelandic Sagas Are Social Networks Like Facebook and Twitter — The Physics arXiv Blog. Network theory is a remarkable new addition to the toolbox that academics use to study literature.

In recent years, computer scientists have pieced together the network of links between characters in historic texts such as the ancient Greek Iliad and Odyssey, the Anglo-Saxon Beowulf and the Irish Táin Bó Cuailnge. In many of these texts, the characters form social networks that are remarkably similar to the ones found in real life on Facebook, Twitter and other social networks. The networks in the Iliad and Odyssey are particularly realistic. Inspired by this work, Mac Carron and Kenna have taken the same approach with the Sagas of Icelanders, which consist of 18 tales involving more than 1500 individuals. The Tale Toki Tokason. The Tale of Toki Tokason © Peter Tunstall, 2005 In the days when Olaf was king in Sarpsborg, it once happened that a large stranger came before the king and greeted him. And the king received him well and asked him his name.

(116) The Viking Age as a Period of Religious Transformation. The Christianization of Norway from AD 560 to 1150/1200. Central European regions even more than has ever been suggested before. Previously published in the series Studies in Viking and Medieval Scandinavia Reflections on Old Norse Myths (edited by Hermann Pernille, Jens Peter Schjødt, Rasmus Tranum Kristensen)