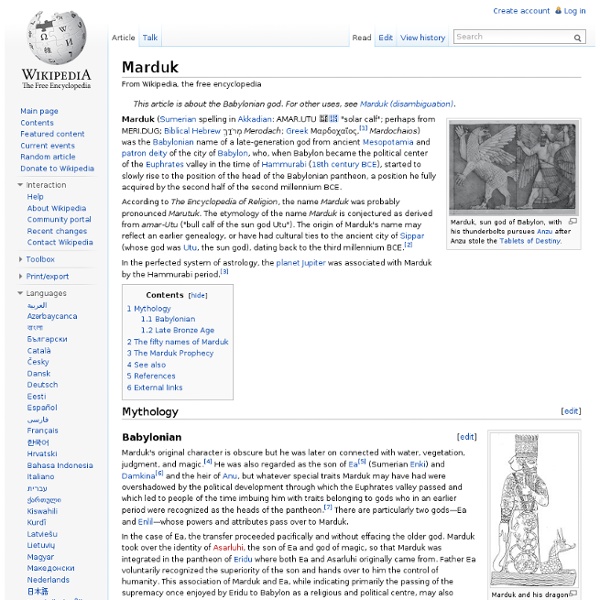 Marduk (Sumerian spelling in Akkadian: AMAR.UTU 𒀫𒌓 "solar calf"; perhaps from MERI.DUG; Biblical Hebrew מְרֹדַךְ Merodach; Greek Μαρδοχαῖος,[1] Mardochaios) was the Babylonian name of a late-generation god from ancient Mesopotamia and patron deity of the city of Babylon, who, when Babylon became the political center of the Euphrates valley in the time of Hammurabi (18th century BCE), started to slowly rise to the position of the head of the Babylonian pantheon, a position he fully acquired by the second half of the second millennium BCE. In the city of Babylon, he resided in the temple Esagila.[2] According to The Encyclopedia of Religion, the name Marduk was probably pronounced Marutuk. In the perfected system of astrology, the planet Jupiter was associated with Marduk by the Hammurabi period.[4] Mythology[edit] Marduk and his dragon Mušḫuššu, from a Babylonian cylinder seal Babylonian[edit] In the case of Ea, the transfer proceeded pacifically and without effacing the older god.

Shango Shango statuette This depiction of Shango on horseback has been attributed to the workshop of the renowned Yoruba carver Toibo, of the town of Erin. It was probably carved in the 1920s or 1930s for the timi (king) of Ede (one of the historic Yoruba kingdoms), who kept it in a shrine dedicated to the orisha (god) Shango. Equestrian figures are potent symbols of power in many parts of Africa where ownership of horses was long restricted to warriors and political leaders. In Yoruba mythology, Shango was both a king and the orisha associated with thunder and lightning. Figure of a Devotee of Shango Holding an Oshe Shango, Brooklyn Museum In the Yorùbá religion, Ṣàngó (also spelled, Sango, Shango, often known as Xangô or Changó in Latin America and the Caribbean, and also known as Jakuta[1]) (from '=shan, 'to strike') is perhaps one of the most popular Orisha; also known as the god of fire, lightning and thunder. Historical Sango[edit] Veneration of Shango[edit] In the Americas[edit]

Gilgamesh Gilgamesh (/ˈɡɪl.ɡə.mɛʃ/; Akkadian cuneiform: 𒄑𒂆𒈦 [𒄑𒂆𒈦], Gilgameš, often given the epithet of the King, also known as Bilgamesh in the Sumerian texts)[1] was the fifth king of Uruk, modern day Iraq (Early Dynastic II, first dynasty of Uruk), placing his reign ca. 2500 BC. According to the Sumerian King List he reigned for 126 years. In the Tummal Inscription,[2] Gilgamesh, and his son Urlugal, rebuilt the sanctuary of the goddess Ninlil, in Tummal, a sacred quarter in her city of Nippur. Gilgamesh is the central character in the Epic of Gilgamesh, the greatest surviving work of early Mesopotamian literature. Cuneiform references[edit] In the Epic of Gilgamesh, Gilgamesh is credited with the building of the legendary walls of Uruk. Fragments of an epic text found in Me-Turan (modern Tell Haddad) relate that at the end of his life Gilgamesh was buried under the river bed. Later (non-cuneiform) references[edit] Theodore Bar Konai (ca. See also[edit] Notes and references[edit]

Akkadian Empire Coordinates: During the 3rd millennium BC, there developed a very intimate cultural symbiosis between the Sumerians and the Semitic Akkadians, which included widespread bilingualism.[5] Akkadian gradually replaced Sumerian as a spoken language somewhere around the turn of the 3rd and the 2nd millennia BC (the exact dating being a matter of debate).[6] The Akkadian Empire reached its political peak between the 24th and 22nd centuries BC, following the conquests by its founder Sargon of Akkad (2334–2279 BC). After the fall of the Akkadian Empire, the Akkadian people of Mesopotamia eventually coalesced into two major Akkadian speaking nations: Assyria in the north, and, a few centuries later, Babylonia in the south. City-state of Akkad[edit] History[edit] Origins[edit] Sargon and his sons[edit] Bronze head of an Akkadian, probably an image of Manishtusu or Naram-Sin; descendants of Sargon (National Museum of Iraq) "My mother was a changeling, my father I knew not. Kings of the Akkad Dynasty

Set (mythology) Set /sɛt/ or Seth (/sɛθ/; also spelled Setesh, Sutekh,[1] Setekh, or Suty) is a god of the desert, storms, disorder, violence and foreigners in ancient Egyptian religion.[2] In Ancient Greek, the god's name is given as Sēth (Σήθ). Set is not, however, a god to be ignored or avoided; he has a positive role where he is employed by Ra on his solar boat to repel the serpent of Chaos Apep.[2] Set had a vital role as a reconciled combatant.[2] He was lord of the red (desert) land where he was the balance to Horus' role as lord of the black (soil) land.[2] In Egyptian mythology, Set is portrayed as the usurper who killed and mutilated his own brother Osiris. Family Set's siblings are Osiris, Isis, and Nephthys. Origin The meaning of the name Seth is unknown, thought to have been originally pronounced *Sūtaḫ based on the occurrence of his name in Egyptian hieroglyphs (swtḫ), and his later mention in the Coptic documents with the name Sēt.[4] Set animal Conflict between Horus and Set Protector of Ra

Zu (mythology) In Sumerian and Akkadian mythology, Anzû is a divine storm-bird and the personification of the southern wind and the thunder clouds. This demon—half man and half bird—stole the "Tablets of Destiny" from Enlil and hid them on a mountaintop. Anu ordered the other gods to retrieve the tablets, even though they all feared the demon. According to one text, Marduk killed the bird; in another, it died through the arrows of the god Ninurta. In Babylonian myth, Anzû is a deity associated with cosmogeny. Jump up ^ Greek Myths and Mesopotamia: Parallels and Influence in the Homeric Hymns and Hesiod Fengshen Yanyi Fengshen Yanyi, also known as Fengshen Bang, or translated as The Investiture of the Gods, is a 16th-century Chinese novel and one of the major vernacular Chinese works in the shenmo genre written during the Ming Dynasty (1368–1644).[1] Consisting of 100 chapters, it was first published in book form around the 1550s.[1] Plot[edit] The novel is a romanticised retelling of the overthrow of King Zhou, the last ruler of the Shang Dynasty, by King Wu, who would establish the Zhou Dynasty in place of Shang. The story integrates oral and written tales of many Chinese mythological figures who are involved in the struggle as well. These figures include human heroes, immortals and various spirits (usually represented in avatar form like vixens, and pheasants, and sometimes inanimate objects such as a pipa). Some well-known anecdotes[edit] Nüwa and King Zhou[edit] King Zhou visits the temple of the ancient Chinese goddess Nüwa to worship her. Daji and Boyi Kao[edit] Ji Chang and Jiang Ziya[edit]