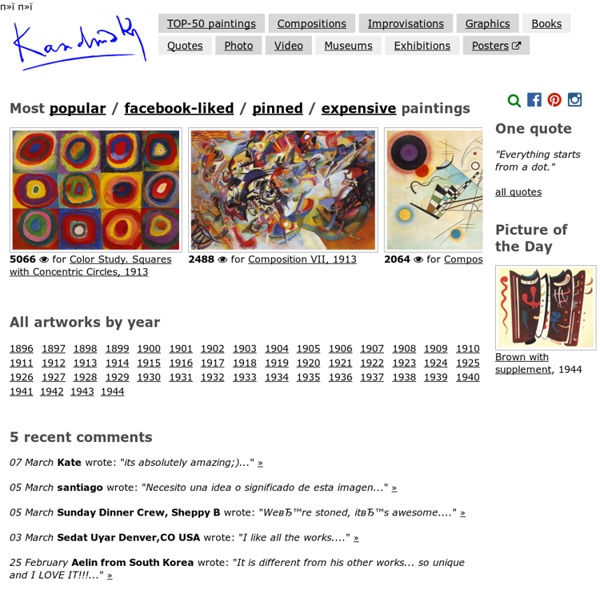 Beginning. Moscow. 1866-1896 Wassily Wasilyevich Kandinsky was born on December, 16th (4), 1866 in Moscow, in a well-to-do family of a businessman in a good cultural environment. In 1871 the family moved to Odessa where his father ran his tea factory. There, alongside with attending a classical gymnasium (grammar school), the boy learned to play the piano and the cello and took to drawing with a coach. "I remember that drawing and a little bit later painting lifted me out of the reality" , he wrote later.

The Age of Pop Doing Pop Philosophy, thinking with an against Adorno I thought I would get away with some nice oneliners Peter Paul, but you don’t let me of the hook. Rightly so. Selected Work 2002 - 2013 Life in a Glasshouse (30 studies_Melbourne Zoo) Mixed media on paper, 142.50 x 120 cm. Finalist in The Parkin Drawing Prize, NZAFA, Wellington, NZ Life in a Glasshouse (detail), charcoal and water colour pencil Life in a Glasshouse (detail), charcoal on paper. 28 x 21 cm G-Souto's Blog: Teaching Arts : Wassily Kandinsky Kandinsky, who is credited with being the first painter to produce purely abstract works, used colour as an expression of emotion, often likening the process of painting to composing music. In Grey, 1919 Paris, Musee National Art Moderne, Centre Georges Pompidou Born on December, 16th, 1866 in Moscow, in a well-to-do family of a businessman in a good cultural environment. In 1871 the family moved to Odessa where his father ran his tea factory.

Designer Womenswear New Classical. For Spring/Summer 2017 Mary Katrantzou looked introspectively to Greece, the country of her birth. Exploring its rich history, mythology and culture, she dug deep into her own work. This collection is an archaeological exploration, unearthing the classics of Katrantzou. Francis Bacon Biography, Art, and Analysis of Works Born in Dublin, Francis Bacon was named after his famous ancestor, the English philosopher and scientist. His father, Edward, served in the army and later took a job in the War Office during World War I. In an interview with critic David Sylvester, Bacon attributed the connotations of violence in his paintings to the turbulent circumstances of his early life. A British regiment was stationed near his childhood home, and he remembered constantly hearing soldiers practicing maneuvers. Naturally, his father's position in the War Office alerted him to the threat of violence at an early age. Returning to Dublin after the war, he came of age amidst the early campaigns of the Irish nationalist movement.

Wassily Kandinsky Biography, Art, and Analysis of Works Wassily (Vasily) Wassilyevich Kandinsky was born in 1866 in Moscow to well educated, upper-class parents of mixed ethnic origins. His father was born close to Mongolia, while his mother was a Muscovite, and his grandmother was from the German-speaking Baltic. The bulk of Kandinsky's childhood was spent in Odessa, a thriving, cosmopolitan city populated by Western Europeans, Mediterraneans, and a variety of other ethnic groups. At an early age, Kandinsky exhibited an extraordinary sensitivity toward the stimuli of sounds, words, and colors. Charles Frederick Worth (1826–1895) and The House of Worth Early Career Charles Frederick Worth, the designer who dominated Parisian fashion in the latter half of the nineteenth century, was born in Bourne, Lincolnshire, England, on October 13, 1825. As a young man, Worth worked as an apprentice and clerk for two London textile merchants. In addition to gaining a thorough knowledge of fabrics and the business of supplying dressmakers during this time, he also visited the National Gallery and other collections to study historic portraits.

Hello everyone. I hope that the first week of the new year has gone great for you. Today I wanted to share with you a "Babysitter Information Printable" that I created.