The Book of THOTH - The complete guide to the Tarot, Magick and 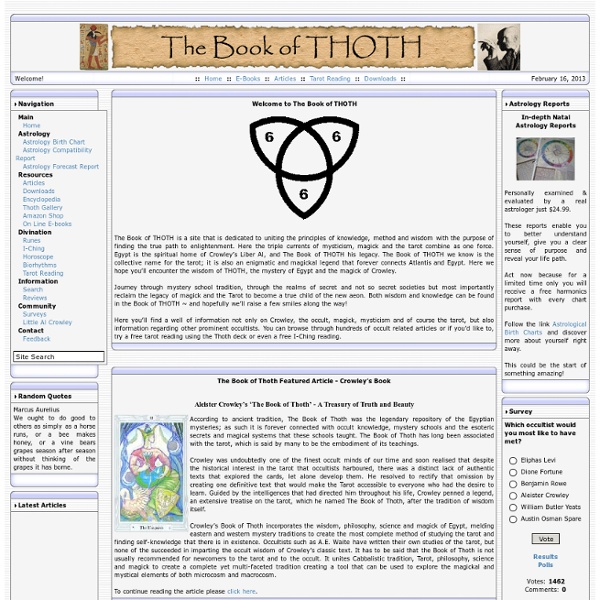 Magick Without Tears -- Contents Table of Contents Note: This hypertext edition of Magick Without Tears is based on a plaintext edition entered in 1988 by Bill Heidrick from the 1954 first edition, with a foreword by the original editor Karl J. Germer. The current (New Falcon) paper edition of this work was substantially abridged by editor F.I. Regardie. Omissions by Germer from the original letters have not been restored. Footnotes indicated by *, †, ‡, etc. by either Crowley or Germer. In the interests of readability, when converting the plaintext to HTML I made no attempt to retain the line breaks and pagination from the paper edition. Magic without Tears November 13, 1988 e.v. key entry and first proof by Bill Heidrick T.G. Key entry by Bill Heidrick, (415) 454-5176 P.O. Aleister Crowley MAGICK WITHOUT TEARS Complete and Unabridged, edited with a Foreword by Karl J. HTML coding by Frater T.S. for Nu Isis Working Group. Magick Without Tears

Spirit Vaults : Meditation - Essay - StumbleUpon It seems everyone is interested in meditation...talking about the wonderful benefits, recommending classes and discussing the different ways to "do it". But, for a beginner, just what is "it"? And how do you do "it"? Our busy, hectic, lifestyles may seem to prohibit this peaceful practice, or provide a convenient "excuse" not to begin, or continue, to meditate...but, the happy news is, you CAN successfully benefit even if you practice for short periods. With the simple technique described below, you will begin and incredible journey. Sit comfortably, preferably upright and alert. To sit on a mat, cushion or pillow, sit cross-legged, half or full lotus, depending on your ability. You may close your eyes (unless this causes you to fall asleep) or gaze with almost-closed eyes as if looking downward and inward. Traditionally, the best times to practice are upon arising and in the evening or before bedtime. Joi Eden is the co-founder, along with Betty Sun, of Stillness In Motion, Inc.

Three Books of Occult Philosophy De Occulta Philosophia, Libri tres Three Books of Occult Philosophy (De Occulta Philosophia libri III) is Heinrich Cornelius Agrippa's study of occult philosophy, acknowledged as a significant contribution to the Renaissance philosophical discussion concerning the powers of ritual magic and its relationship with religion. The three books deal with Elemental, Celestial and Intellectual magic. The books outline the four elements, astrology, kabbalah, numbers, angels, God's names, the virtues and relationships with each other as well as methods of utilizing these relationships and laws in medicine, scrying, alchemy, ceremonies, origins of what are from the Hebrew, Greek, and Chaldean context. These arguments were common amongst other hermetic philosophers at the time and before. Relation to the Knights Templar and magic use[edit] Three Books of Occult Philosophy helped perpetuate the belief in modern popular culture that the Knights Templar practiced witchcraft. See also[edit] References[edit]

Meditation Techniques for the Busy or Impatient If you are reading this then you probably recognize some value in meditation, in slowing down, and reducing stress. At the same time you probably struggle with fitting meditation into your daily routine. The good news is that establishing a daily meditation practice is easier than you may have thought. In order to make this work, it will be helpful to: Lower your expectations of meditation. How to Easily Incorporate Meditation into Your Day The way to do this is to transform some of the things you are already doing each day into mindful meditation. Exercise Meditation Any continuous physical activity over a period of time can work. The way to transform any of these activities into meditation is to first focus on your breath. Bathing Meditation The next time you shower or take a bath, create your own spa experience simply by flipping the switch in your mind. Let go of words and labels by expressing your good feelings through meaningless sounds such as “aum,” “mmmm,” or “ahhhhh.”