The Age of Man

Logo_designs. Logo_designs. 5 Millennial Shopping Habits all E-Commerce Vendors Need to Know. It’s no surprise that millennials are making their mark within the demographics of online shoppers. 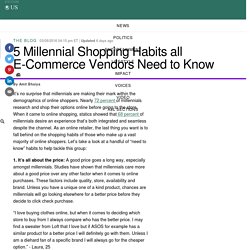 Nearly 72 percent of millennials research and shop their options online before going to the store. When it came to online shopping, statics showed that 68 percent of millennials desire an experience that’s both integrated and seamless despite the channel. As an online retailer, the last thing you want is to fall behind on the shopping habits of those who make up a vast majority of online shoppers. Let’s take a look at a handful of “need to know” habits to help tackle this group: 1. “I love buying clothes online, but when it comes to deciding which store to buy from I always compare who has the better price. That being said, if it’s possible to offer competitive pricing, it may be wise to do so as its most likely in your favor. 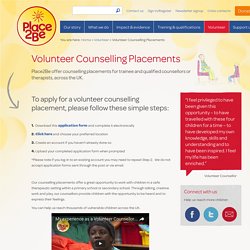 Download this application form and complete it electronically. Loneliness campaign - Co-op. What we’re doing with the money Co-op members and staff have raised millions of pounds to fund new British Red Cross services tackling loneliness in 39 locations across the UK. 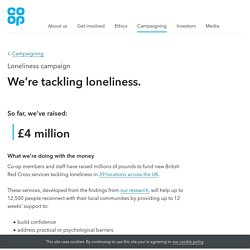 These services, developed from the findings from our research, will help up to 12,500 people reconnect with their local communities by providing up to 12 weeks’ support to: 5 Fatal Effects of Loneliness that Leads to Mental Disorders. The feeling of loneliness or being detached from others is not just a human emotion; it is a complex emotional response to the lack of companionship. 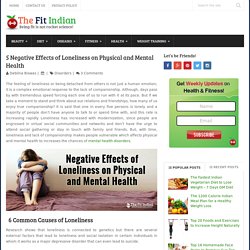 Although, days pass by with tremendous speed forcing each one of us to run with it at its pace. But if we take a moment to stand and think about our relations and friendships, how many of us enjoy true companionship? It is said that one in every five persons is lonely and a majority of people don’t have anyone to talk to or spend time with, and this rate is increasing rapidly. Urban Photography by Kostennn. Common mental health problems: identification and pathways to care. Common mental health disorders, such as depression, generalised anxiety disorder, panic disorder, obsessive-compulsive disorder (OCD), post-traumatic stress disorder (PTSD) and social anxiety disorder[], may affect up to 15% of the population at any one time. 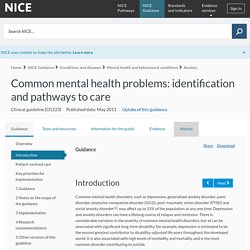 Depression and anxiety disorders can have a lifelong course of relapse and remission. There is considerable variation in the severity of common mental health disorders, but all can be associated with significant long-term disability. For example, depression is estimated to be the second greatest contributor to disability-adjusted life years throughout the developed world. It is also associated with high levels of morbidity and mortality, and is the most common disorder contributing to suicide. The prevalence of individual common mental health disorders varies considerably. The vast majority (up to 90%) of depressive and anxiety disorders that are diagnosed are treated in primary care. Panel Menu - Slide Animation - Menus Done Well - Awwwards. This website uses cookies to ensure you get the best experience on our website. 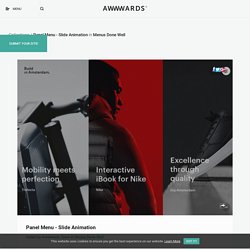 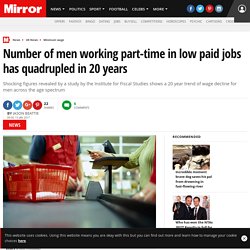 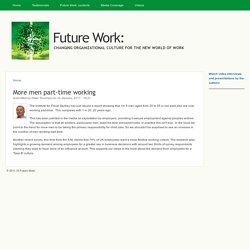 This compares with 1 in 20, 20 years ago. This has been painted in the media as exploitation by employers, providing insecure employment against peoples wishes. The assumption is that all workers, particularly men, want full-time premanent jobs. In practice this isn't true. Bleak trend of low, part-time wages in UK is revealed. Men on low pay are four times more likely to be working part-time than in the 1990s, according to a survey that illustrates the trend for low hours and wages to go together. 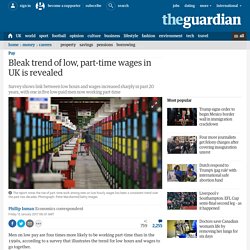 The Institute for Fiscal Studies said 20 years ago only one in 20 men aged 25 to 55 worked part-time with low hourly wages. Today one in five of this group works part-time. Meanwhile the proportion of middle and high–wage men working part-time remains low at less than 1 in 20, which the thinktank said showed that earnings inequality among men had risen significantly over a single generation. Jonathan Cribb, an IFS economist, said: “The number of low-wage men working part time has increased sharply over the past 20 years. To understand the drivers of inequality in the UK it is vital to understand the growing association between low hourly wages and low hours of work among men.” Benefits for the low paid, which until recently kept pace with inflation, have also influenced the income gap. Young, successful, busy yet lonely: A generation empowered by the internet and plagued by loneliness.

Podcasts are so popular because people living in busy cities are so lonely, I was informed by a friend the other day. 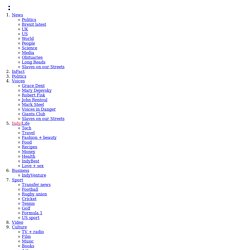 While the research to back up that statement is somewhat lacking, the reasoning behind it is more compelling. The assuredness that should be enjoyed by smart, engaged, digitally savvy and successful 20 and 30 something-year-olds is, for an increasing number, overshadowed by a gnawing sense of isolation and loneliness. Untitled. Mental health problems are a growing public health concern. They are prevalent not just in the UK, but around the world. Mental health problems are one of the main causes of the overall disease burden worldwide.1Mental health and behavioural problems (e.g. depression, anxiety and drug use) are reported to be the primary drivers of disability worldwide, causing over 40 million years of disability in 20 to 29-year-olds.2Major depression is thought to be the second leading cause of disability worldwide and a major contributor to the burden of suicide and ischemic heart disease.3It is estimated that 1 in 6 people in the past week experienced a common mental health problem4 Browse all the mental health statistics Download a PDF of all the stats Vos, T., et al. (2013) Global, regional, and national incidence, prevalence, and years lived with disability for 301 acute and chronic diseases and injuries in 188 countries, 1990–2013: a systematic analysis for the Global Burden of Disease Study.

Why are so many middle-aged men committing suicide? Suicide rates (per 100,000) among men, by age group, 2001-2013. Source: ONS I’m 49, very nearly 50. Number of suicides in UK increases, with male rate highest since 2001. The rate of suicides in the UK increased in 2013, with the level among males its highest since 2001 and middle-aged men most at risk, according to the latest data. Figures released by the Office for National Statistics (ONS) show that 6,233 suicides of people over the age of 15 were registered in 2013, 252 more than in 2012, which represents a 4% increase.

UK's social mobility problem holding back Thatcher generation, says report. The generation that grew up under Margaret Thatcher were the first to start with lower incomes than their parents and have endured an increasingly divided Britain, according to the government’s social mobility commission. Its annual “state of the nation” report published on Wednesday morning found that “Britain has a deep social mobility problem which is getting worse for an entire generation of young people”. According to the commission, established by David Cameron as prime minister, those born in the 1980s are the first cohort since the second world war to not start their careers with higher incomes than their parents and immediate predecessors.

“The rungs on the social mobility ladder are growing further apart,” said Alan Milburn, the former Labour MP who chairs the commission. “It is becoming harder for this generation of struggling families to move up. Milburn drew parallels with the worst-off areas in the country also voting most strongly for Britain to leave the EU. UK Government Web Archive – The National Archives. Reality Check: Do men earn less for part-time work? The Claim: Conservative MP Philip Davies, who has been voted on to the Women and Equalities Committee, has argued that there is a gender gap in part-time earnings, with men earning less than women. Reality check verdict: Women who work between 10 and 30 hours a week receive a higher hourly rate than men. But in all other categories of part-time and full-time work, men earn more than women and if part-time and full-time work is taken together, men on average earn 18% more per hour than women.

MP Philip Davies has argued that tackling issues of discrimination against men is also important and therefore the Commons Women and Equalities Select Committee should drop the word "women" from its title. Men Are Actually More Emotional Than Women, They Just Hide It Better. Women are emotional, true. But according to a recent study, men may very well be more emotional than their female counterparts. The only difference is men hide it better.

In this study, conducted by neurologists at Mindlab, men are actually much more sensitive than women when it comes to being presented with emotional stimuli. Why Is Loneliness Becoming A Major Issue Among Men Who Aren't Elderly? The Experts Shed Light. Research report: Men and Suicide. Mental Health Foundation. 12 January 2016 Sue Bourne’s documentary, The Age of Loneliness, broadcast on the BBC last week shone a light on an issue that can no longer be ignored. The UK is now one of the loneliest places to live in Europe. Investigation into loneliness ‘crisis’ among London’s young. Loneliness: a silent plague that is hurting young people most. Loneliness has finally become a hot topic – last month, the Office for National Statistics found Britain to be the loneliness capital of Europe. What's the world's loneliest city? A Depression &amp; Mental Health Support Community.

A Depression &amp; Mental Health Support Community. Mother Theresa once said “The biggest disease today is not leprosy or cancer or tuberculosis, but rather the feeling of being unwanted, uncared for and deserted by everybody.” Statistics about Key Mental Health Problems. Just like physical health, we all have mental health. The term itself covers a broad range of emotional and psychological concerns that affect millions of people every day. According to the Mental Health Foundation, every year in the UK 70 million workdays are lost due to mental illness, including anxiety, depression and stress related conditions. Personal well-being in the UK - Office for National Statistics. Average ratings of anxiety increased slightly between the years ending September 2015 and 2016. Fathersquarterly.com. Key Statistics about Men and Mental Health. Mental health problems can affect anyone, regardless of age, gender, race or social background.

Despite this however, studies have shown that certain mental illnesses affect men and women differently. Perhaps the most interesting (and worrying) finding is that while on average more women are diagnosed with common mental health problems than men, the rate of male suicide is significantly higher. Study shows having a 'bromance' could make you live longer. 36 Astonishing YouTube Stats for 2016. What Millennials’ YouTube Usage Tells Us about the Future of Video Viewership - comScore, Inc. Marriage is more beneficial for men than women, study shows. London's First Happy Café, The Canvas, Aims To Improve Wellbeing And Self-Esteem In The Capital.

Depression in childhood and adolescence. Suicide in young people - causes and solutions. Why Men Kill Themselves. Untitled. Cassandra Cappello. Minimalissimo – Minimalism in Design. UK, One million men now working part-time. Generation Z: The Lonely Ones? There's a Modern Affliction Ruining Our Friendships — And We're All Guilty of It.

Be Mindful. What Millennials’ YouTube Usage Tells Us about the Future of Video Viewership - comScore, Inc. 36 Astonishing YouTube Stats for 2016. Key Statistics about Men and Mental Health. Neuropsychopharmacology. 2.5 million men 'have no close friends' Millennial Men Don't Subscribe to a Traditional Male Identity - eMarketer. Fact Sheet - We Are Fathers4Justice – The Official Campaign Organisation. The 9 Devastating Effects Of The Absent Father.

How to Create a Lifelong Brotherhood. Hypermasculinity Is A Plague On The Modern Man. Building Modern Men - Huffington Post UK. A Crisis in Modern Masculinity: Understanding the Causes of Male Suicide.