Untitled. Central ParkNew York CityJune 20, 2016 Before administering the Oath, I have one or two things that I want to say on this occasions. 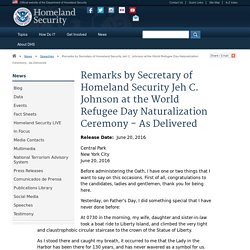 First of all, congratulations to the candidates, ladies and gentlemen, thank you for being here. Yesterday, on Father’s Day, I did something special that I have never done before: DHS Announces Human Trafficking Training Program For Federal Law Enforcement. For Immediate ReleaseDHS Press OfficeContact: 202-282-8010 WASHINGTON – The Department of Homeland Security (DHS) today announced that the Federal Law Enforcement Training Centers (FLETC) will begin to provide human trafficking awareness training as part of basic training courses at FLETC. 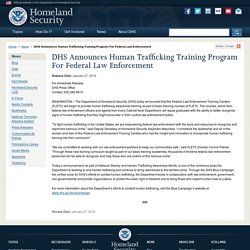 The courses, which train federal law enforcement officers and agents from every Cabinet level Department, will equip graduates with the ability to better recognize signs of human trafficking that they might encounter in their routine law enforcement duties. DHS Blue Campaign and Birmingham, Alabama Announce New Partnership to Combat Human Trafficking. For Immediate ReleaseDHS Press OfficeContact: 202-282-8010 WASHINGTON— The Department of Homeland Security (DHS) today announced a new partnership between the DHS Blue Campaign, the unified voice for DHS’s efforts to combat human trafficking, and Birmingham, Ala. 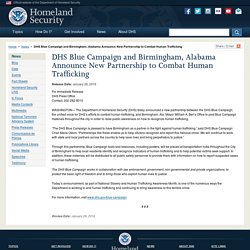 Through this partnership, Blue Campaign tools and resources, including posters, will be placed at transportation hubs throughout the City of Birmingham to help local residents identify and recognize indicators of human trafficking and to help potential victims seek support. For more information, visit www.dhs.gov/blue-campaign. Statement of Purpose. Speaking before the United Nations General Assembly at its 50th Anniversary on October 22, 1995, then-President Clinton called for the establishment of a network of International Law Enforcement Academies (ILEAs) throughout the world to combat international drug trafficking, criminality, and terrorism through strengthened international cooperation. 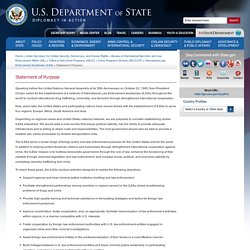 Now, years later, the United States and participating nations have moved ahead with the establishment of ILEAs to serve four regions: Europe, Africa, South America and Asia. Depending on regional needs and United States national interests, we are prepared to consider establishing similar ILEAs elsewhere. We would seek a host country that enjoys political stability, has the ability to provide adequate infrastructure and is willing to share costs and responsibilities. 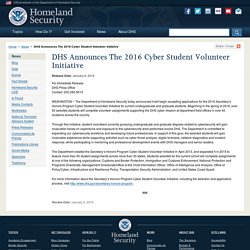 Beginning in the spring of 2016, over 50 selected students will complete volunteer assignments supporting the DHS cyber mission at department field offices in over 40 locations across the country. Through this initiative, student volunteers currently pursuing undergraduate and graduate degrees related to cybersecurity will gain invaluable hands-on experience and exposure to the cybersecurity work performed across DHS. The Department is committed to expanding our cybersecurity workforce and developing future professionals.

For more information about the Secretary’s Honors Program Cyber Student Volunteer Initiative, including the selection and application process, visit. Civil Rights and Civil Liberties. Safeguarding civil rights and civil liberties is critical to DHS’ work to protect the nation from the many threats we face. 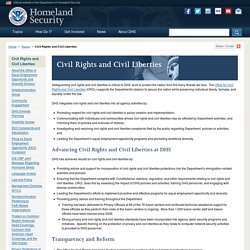 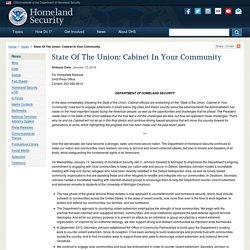 The President made clear in his State of the Union address that the true test is not the challenges we face, but how we approach those challenges. That’s why he and his Cabinet will not let up in this final stretch and continue driving toward solutions that will move this country forward for generations to come, while highlighting the progress that has been made over the past seven years. Publications.