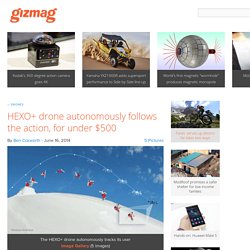 It makes for some impressive aerial footage of the person, but also requires a fair bit of piloting skill. Additionally, if you buy one of those drones, you'll end up shooting other people doing those things – what if you want footage of yourself? Well, that's where the HEXO+ hexacopter comes in. It autonomously flies above its user, shooting video of them as they do their thing.

The copter communicates with the user's iOS or Android smartphone using the MAVLink protocol. Wolf Intro viewing. Extreme Wearables: How Hi Tech and Wildlife Science Improve Each Other. We sure love putting collars onn stuff. Harvest mouse. Pentailed tree shrew a species new to science that has co-evolved with the plant below. 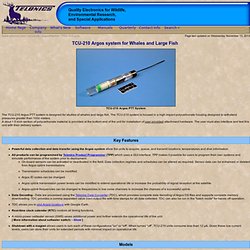 The TCU-210 system is housed in a high impact polycarbonate housing designed to withstand pressures greater than 1000 meters. A stout 1.5 inch section of polycarbonate material is provided at the bottom end of the unit for installation of user provided attachment hardware. The user must also interface and test this unit with their delivery system. Key Features Powerful data collection and data transfer using the Argos system allow the units to acquire, queue, and transmit locations, temperatures and dive information. Models The number of transmissions is based on a continuous series of transmissions of a 4-byte Argos message at a 60-second repetition rate at 25°C. Specifications: Electronic and Packaging. Minke Whale. Mdcollartagged. The colors are Hermes, the design more Radio Shack. JaguarCollar MG 5165. Rfid tag polar bear with co. Collared lemur1. 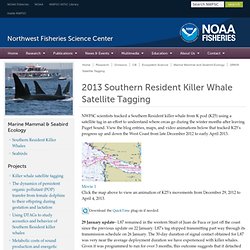 View the blog entries, maps, and video animations below that tracked K25’s progress up and down the West Coast from late December 2012 to early April 2013. Movie 1Click the map above to view an animation of K25’s movements from December 29, 2012 to April 4, 2013. 29 January update– L87 remained in the western Strait of Juan de Fuca or just off the coast since the previous update on 22 January.

L87's tag stopped transmitting part way through its transmission schedule on 26 January. The 30-day duration of signal contact obtained for L87 was very near the average deployment duration we have experienced with killer whales. Lick on the animation to view the whales movements from 26 December through 23 January. 20 March update – Over the past two days K25 headed south along the Washington Coast.

Montana Wolf Collar Recovered in Canada After 15 Years - Flathead Beacon. Biologists know that wolves range far and wide throughout Northwest Montana’s dense swaths of wilderness, having naturally recolonized the region after their extirpation 80 years ago. 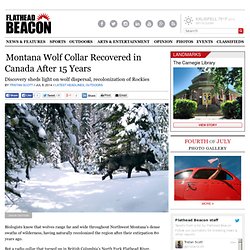 But a radio collar that turned up in British Columbia’s North Fork Flathead River, administered as part of an early study to help shed light on how wolves proliferate, bolsters data that wolf biologists continue to find valuable to understand the elusive and nomadic animal. Kent Laudon, a wolf management specialist for Montana Fish, Wildlife and Parks, which assumed wolf management from the federal government three years ago, recently recovered a radio collar that had been affixed to a 2-year-old male gray wolf more than 15 years ago. The collar was lying on the ground in a remote drainage of British Columbia’s North Fork, about 62 miles from where researchers captured the wolf in 1999. Deployed by Tom Meier and Diane Boyd of the U.S.