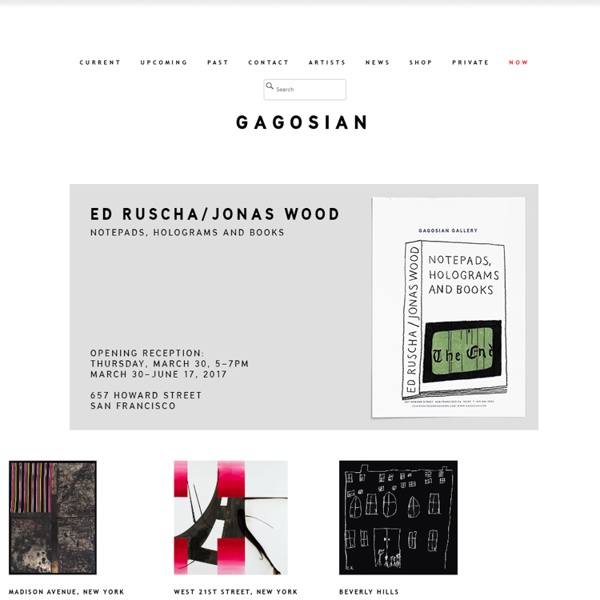 YVON LAMBERT Opening on Friday March 14th, 2014 No Drones March 14th – April 19th Galerie für Zeichnung - contemporary drawings Bertram Hasenauer Opening: 7 September 2012, 6 - 9pm Duration of the Exhibition: 7 September - 20 October 2012 is pleased to present you TROON, the second solo exhibition of austrian artist Bertram Hasenauer. The show focuses on a group of new works which can be read as a sythesis of Hasenauers painting characterized by the strong use of flat colours and the delicately structured lines of his drawings.The wooden support is covered by an either black, white or grey backgroundcolour from which the shapes of the pencil drawn figures emerge. Unlike most of Hasenauers previous exhibitions, TROON does not include landscapes or text works, but centres on one single genre – the portrait.

Hayward Gallery & Visual Arts See all events taking place in Hayward Gallery Hayward Gallery has a long history of presenting work by the world's most adventurous and innovative artists. For free entry to all exhibitions become a Southbank Centre Member. Galerie du Pont Neuf .woochimp_wg{} Toutes les Photographes Jef baecker Thierry lacroix Nathan Coley Nathan Coley (b.1967, Glasgow, Scotland) is interested in the idea of ‘public’ space, and his practice explores the ways in which architecture becomes invested – and reinvested – with meaning. Across a range of media Coley investigates what the built environment reveals about the people it surrounds and how the social and individual response to it is in turn culturally conditioned. Using the readymade as a means to take from and re-place in the world, Coley addresses the ritual forms we use to articulate our beliefs – from hand-held placards and erected signs to religious sanctuaries. Whether highlighting in illuminated letters the testimony of a New Yorker recalling the World Trade Center attacks or erasing the names of the dead from their gravestones, his work frequently turns the specific into the general, thereby testing its function as a form of social representation. Nathan Coley lives and works in Glasgow. Links

Hasted Kraeutler Art Gallery Hasted Kraeutler is pleased to announce The Dream Goes Over the Time, an exhibition of new photographs by French-born, Madrid-based artist Pierre Gonnord (b. 1963), beginning March 5 and running through April 25, 2015. Working for over a decade as contemporary art’s preeminent documentarian of globalization’s dark underbelly—insular communities, tribes, and clans that exist almost entirely off the grid, from coal miners and punks to immigrants and gypsies—master portraitist Gonnord’s distinctive practice has developed into a lifestyle, taking him on epic journeys through back roads and uncharted terrain in search of characters that live within distinctive social groups, cut off from the rest of civilization. After investing much careful time and energy with these communities, Gonnord takes their pictures, capturing his protagonists against dark backgrounds from the waist up, in the manner of Old Master painting and portraiture.

Google Domette Interlining. This traditional interlining is available in the widest variety of weights and finishes to help improve the draping qualities of your curtains. It adds extra weight and body to the lightest of curtain fabrics and is ideal for use with Roman Blinds to improve folding and reduce light entry. Zeng Fanzhi ZENG FANZHI, Self-portrait, 2011, oil on canvas, 59 × 39 5/16 inches (150 × 100 cm) Zeng Fanzhi Listed Exhibitions (29 Kb) Zeng Fanzhi was born in Wuhan, China in 1964. Zeng Fanzhi: A wealth of art in China ©Ben McMillan Zeng Fanzhi in his Beijing studio, July 2013 It was 1998 and Zeng Fanzhi was struggling to find somewhere to display his paintings. The market for modern Chinese art barely existed. Thanks to help from a fledgling local dealership, Zeng was able to hang a piece in the lobby of the Ritz-Carlton hotel in Shanghai and was extremely pleased when the painting – “Mask Series No 6” (1996) – was sold to a visiting American tourist for $16,000. ©Zeng Fanzhi Studio.

Seminars - Employment Law, HR, Health & Safety Peninsula’s vast range of employment law and health & safety seminars and events attract delegates from all industries. Our team of expert seminar presenters operate across the country on a daily basis, delivering valuable and commercial information to business owners, directors and senior managers in an easily digestible and entertaining way. Our fast-paced seminars explore the issues that businesses face on a daily basis in dealing with the current and ever increasing amount of employment law and health & safety legislation. PreviousPrevious NextNext