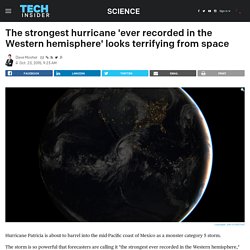 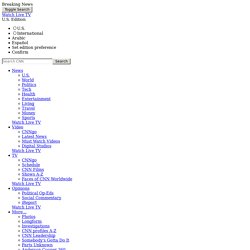 But the major concern is the extraordinary volume of rain the storm is expected to dump on the country's dry, rugged terrain, bringing a severe threat of mudslides. Yemen typically gets around 100 millimeters (4 inches) of rain per year. Chapala is forecast to unleash two to three times that amount in the space of just one day. The deluge is likely to cause "massive debris flows and flash flooding," CNN meteorologist Tom Sater warned. July was the hottest month in Earth’s hottest year on record so far. For planet Earth, no other month was as hot as this past July in records that date back to the late 1800s, NOAA says. 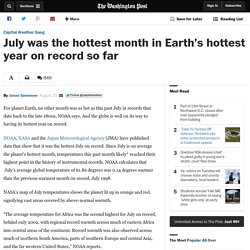 And the globe is well on its way to having its hottest year on record. NOAA, NASA and the Japan Meteorological Agency (JMA) have published data that show that it was the hottest July on record. Since July is on average the planet’s hottest month, temperatures this past month likely* reached their highest point in the history of instrumental records. NOAA calculates that July’s average global temperature of 61.86 degrees was 0.14 degrees warmer than the previous warmest month on record, July 1998. NASA’s map of July temperatures shows the planet lit up in orange and red, signifying vast areas covered by above-normal warmth. Deadly Heat Is Forecast in Persian Gulf by 2100. Photo. 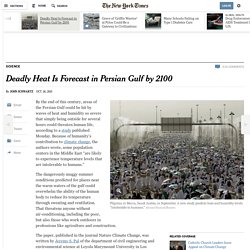 Scientists Say Climate Change Could Render the Middle East Almost Uninhabitable by 2100. This is the grim future of the Middle East, according to a new paper from Massachusetts Institute of Technology professor Elfatih Eltahir and Loyola Marymount University environmental scientist Jeremy Pal published online this week in the journal Nature Climate Change. 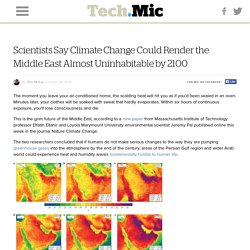 The two researchers concluded that if humans do not make serious changes to the way they are pumping greenhouse gases into the atmosphere by the end of the century, areas of the Persian Gulf region and wider Arab world could experience heat and humidity waves to human life. Humans are capable of surviving in environments up to a "wet-bulb" temperature of 95 degrees Fahrenheit. (The "wet bulb" temperature is the lowest temperature that a warm object — like a human — can achieve via evaporative cooling — such as sweating, or being covered in water.) Eltahir told the New York Times that 95 degree temperature translates to roughly 165 degrees Fahrenheit in a heat-index reading. John P.

"Many of these threats are apparent now. Persian Gulf heat: Too hot to survive here by 2100? The study by authors from Loyola Marymount University and the Massachusetts Institute of Technology offers a harsh assessment: Climate change could leave major cities in a key part of the Middle East, the oil-rich Persian Gulf region, unfit for humans to survive. 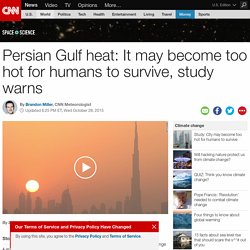 They'd literally be unlivable. And not because far off glaciers are melting and raising the sea level or because storms are becoming stronger or more frequent. They'd be unlivable simply because it is becoming too dang hot during the summer. It makes sense that as global temperatures continue to rise as a result of greenhouse gas emissions by humans (and creep ever closer to the all-important 2 degree Celsius of warming), areas such as the Persian Gulf, which already experience some of the most extreme temperatures on Earth, would be the first to reach a level where humans can no longer survive. Sweating it out -- or not. Earthquake Strikes Afghanistan and Pakistan, Multiplying War’s Woes. Continue reading the main story Video KABUL, Afghanistan — A deadly earthquake hit northern Afghanistan and on Monday afternoon, causing heavy damage and sowing panic across one of the world’s most impoverished and war-torn regions. 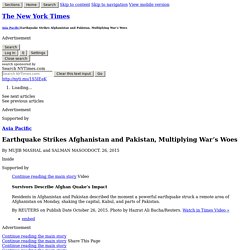 At least 208 were reported killed, 131 or more of them in Pakistan, and that figure seemed likely to rise significantly, officials in both countries said. Buildings broke down in the shaking, sending people pouring into city streets in Peshawar and Islamabad in Pakistan, and in Kabul, the Afghan capital. The Earthquake That Will Devastate the Pacific Northwest. When the 2011 earthquake and tsunami struck Tohoku, Japan, Chris Goldfinger was two hundred miles away, in the city of Kashiwa, at an international meeting on seismology.

As the shaking started, everyone in the room began to laugh. Earthquakes are common in Japan—that one was the third of the week—and the participants were, after all, at a seismology conference. Then everyone in the room checked the time. Seismologists know that how long an earthquake lasts is a decent proxy for its magnitude. The 1989 earthquake in Loma Prieta, California, which killed sixty-three people and caused six billion dollars’ worth of damage, lasted about fifteen seconds and had a magnitude of 6.9. When Goldfinger looked at his watch, it was quarter to three. It was March. How to Stay Safe When the Big One Comes. We’ll send you a reminder. 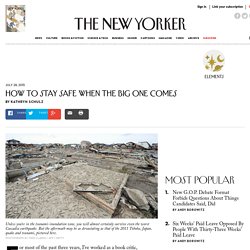 Your reminder will be sent For most of the past three years, I’ve worked as a book critic, which is not a job that affords me many opportunities to scare the living daylights out of my readers. (Authors, occasionally; readers, no.) But earlier this month, when a story I wrote about a dangerous fault line in the Pacific Northwest hit the newsstands, the overwhelming response was alarm. “Terrifying,” the story kept getting called; also “truly terrifying,” “incredibly terrifying,” “horrifying,” and “scary as fuck.” Novelists and screenwriters can terrify people, feel pretty good about themselves, and call it a day.