A Study in Rehabilitation - TheWhiteLily. One. 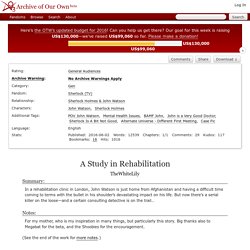 Two. Three. Four. John reached the end of the bar and turned. Fic of the Mad Lori - Alone On the Water, one-shot. An Experiment in Empathy - belovedmuerto. Blood from a Stone. But It's Not Broken. Can You See Me? - stripyjumpers - Sherlock (TV) The pitter-patter of rain on the long paned windows of Baker Street mimicked the tip-tapping of computer keys as John typed up his blog. 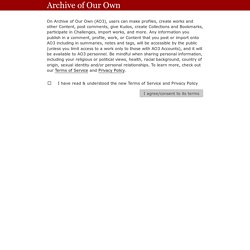 He shifted a bit in his tired maroon armchair in an effort to get more comfortable. John grinned at the laptop screen, and continued to type. So in the end, it was the taxidermist's brother who hid the jewel in the stuffed rabbit. You can imagine the look on my face when Sherlock went and said we needed to cut it open. 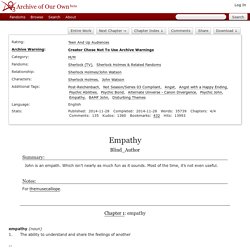 The ability to understand and share the feelings of another John always found it hard to pin down exactly when he'd realised what he was doing was out of the ordinary. When you were a child, you thought your world was the only world that existed, that everything that happened to you and everything you did was normal, and no one ever experienced anything differently. Gradually, through comments of 'you can't possibly know that John', 'what an imagination you have' and 'stop lying' he became aware that no one else knew what other people were feeling all the time.

Finders Keepers. Please check the Sticky Post to find the newest active part and post your prompts there. 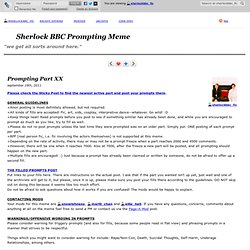 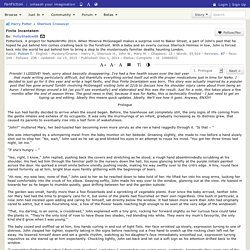 I LIIIIIIVE! Yeah, sorry about basically disappearing. I've had a few health issues over the last year that made writing particularly difficult, but thankfully everything sorted itself out with the proper medications just in time for NaNo. I decided to just go for it this year and write a legit fanfic, and thus Finite Incantatem was born. This story was actually inspired by a popular post that has gone around Tumblr involving McGonagall visiting John at 221b to discuss how his shoulder injury came about from being an Auror.

14 BBC SHERLOCK: Gift of Silence by Wynsom Ch 1, Sherlock. [Please note: Although this story was Canon compliant when written—published well before Season 4's launch date of 1/1/17—this fic is now an AU .] 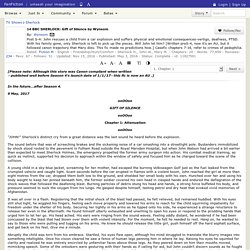 In the future…after Season 4. 9 May, 2017 ooOOoo. In The Land Of The Blind 1/2: libraryofsol. Title: In The Land Of The Blind 1/2Fandom: SherlockPairing: John/SherlockRating: RWord Count: 12,679Warnings: The Apocalypse, possibly disturbing themes, dubious scienceDisclaimer: In no way mine, or anything to do with me, I own nothing.Summary: Sherlock's been acting strangely for days. 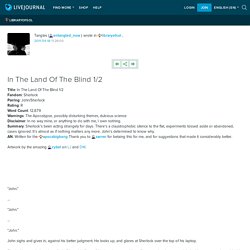 There's a claustrophobic silence to the flat, experiments tossed aside or abandoned, cases ignored. It's almost as if nothing matters any more. John's determined to know why. AN: Written for the. Xover: Knight of Wands Ch 1, Harry Potter & Sherlock. Chapter One "Come along, darling," the well-dressed woman said, tugging gently on the hand of the tiny boy with her as they hurried through the early morning traffic. 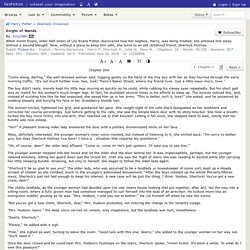 "It's not much further now. See, look! There's Baker Street, where my friend lives. Just a little ways more, love. " The boy didn't reply, merely kept his little legs moving as quickly as he could, while rubbing his sleepy eyes repeatedly. The woman smiled, tightened her grip, and quickened her pace. "Yes? " Obscurity. “My life is a reading list.” 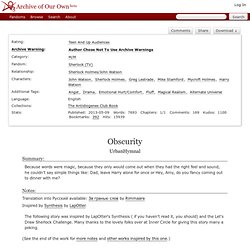 --John Irving, A Prayer for Owen Meany The truth of the matter was that it took quite some time for the Watsons to figure it out. One year of text messages: sent, not received - doctornerdington - Sherlock (TV), Sherlock Holmes & Related Fandoms [Archive of Our Own] Points of Tangency - harlequindreaming (armydoctor) - Sherlock Holmes & Related Fandoms, Sherlock. It begins like this: John Watson, taking a walk in the park, gait leaning heavy on the cane and brow furrowed at the world. 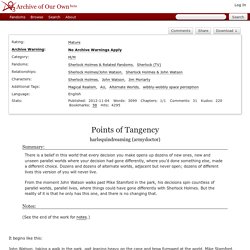 Psychic John? = Part II. Ammcj062 - fic: Quick Hands [Sherlock] Title: Quick HandsFandom: SherlockCharacters/Pairings: Sherlock Homes, John Watson, minor Mike StamfordRatings/Warnings: I’m not deaf, nor do I know anybody who is, so apologies if my characterization or depiction of deafness is off. I tried my best, and if I made any mistakes I don’t mean to offend.Author Notes: written for the comment-fic prompt "Sherlock (BBC), John's leg wasn't psychosomatically crippled, his hearing was. What use could this lunatic have for a deaf man? " John walks into the laboratory at Barts, mentally cataloguing all the changes since he’s been in the room – oh, so very long ago. “Bit different from my day,” he comments. It’s still disorienting to feel his mouth move and his lungs expel air and his vocal chords vibrate but not hear any sound.

The man – Sherlock Holmes, Mike had written when they were sitting on the bench – glances up from the microscope and says something to Mike, who responds. Shadows on the Wall. It starts as a whisper during basic training, a little internal voice that chips in just before he makes a decision. Like when Myers, the hot-shot with the perfect scores, fires what everyone believes is a full clip and the little voice says wait. John is the only one who doesn't stand and so the last bullet (fired when Myers spins his pistol like a western gunslinger) goes through Hodges' leg instead of John's chest.

Fanfic: Sherlock's Trick Ch 5, Sherlock. Lestrade stared at the scene in front of him in shock. To his left, John and Sherlock were leaning against each other, laughing. To his right, Anderson held a wooden stake and a mallet. Lestrade ran a hand over his face, all of the little incidents over the last few months beginning to add up. Anderson looked angry and increasingly confused. Silence Isn't Golden - Summer_Story - Sherlock. Sherlock is expecting shouting and anger and words flying when he returns to John. He expects the rage on John’s features, expects the punch that knocks him into the table. What he doesn’t expect, and he had put it off at first for John just being that angry, is the silence.

He is silent. Completely and utterly silent. Even after Sherlock corrects himself and moves to speak, John makes no noise, only contorts his face to express his anger and relief and pain. Switch. It has been more than a year since I posted here, and yet Livejournal still asks me: restore from saved draft? I did not restore from saved draft; I come with fiction. Will there be more fiction in the future? I think there may be. Title: SwitchAuthor: ristrettoetteFandom: Sherlock (BBC)Rating: PGWords: 850Summary: From a prompt on a meme. Sensory overload on the Underground. There is a switch. The Curious Adventure of the Drs Watson Show Chapter. The Hay Wain Chapter 1: Kind, a sherlock fanfic. Falling_voices: the theory of narrative causality – master post. The World On His Wrist. Emotionanalysis: the year that never was. [Sherlock/John]

They tell me their secrets (will you tell me yours too), John/Sherlock, PG-13. Vibrations - Chapter 3 - 221b_ee. When The Bough Breaks. You are a Paradigm. There are more things in heaven and earth, Horatio, Than are dreamt of in your philosophy. Hamlet, Act 1 Scene 1 There is a loose floorboard in the upstairs bedroom of 221B. Underneath it there is a box, long and slim and made of cherry, heavy to hold, but simple to look at. It opens to those who know how. Tilartdouspart. Part XV.