Does Pay Transparency Close the Gender Wage Gap? High profile report demonstrates that its own results are wrong. New York Times Trashes Dad - Again. May 20, 2019 by Robert Franklin, Member, National Board of Directors, National Parents Organization This being the New York Times and a pre- Mothers Day piece, we’re not surprised to find it astonishingly anti-dad and utterly incurious about the realities of family life and the “work-life balance.” 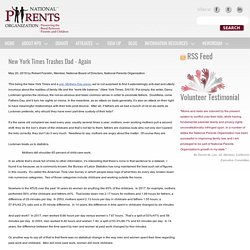 (New York Times, 5/4/19) Put simply, the writer, Darcy Lockman ignores the obvious, the not-so-obvious and basic common sense in order to excoriate fathers. Doubtless, come Fathers Day, she’ll turn her sights on moms. In the meantime, as an attack on dads generally, it’s also an attack on their right to have meaningful relationships with their kids post-divorce. After all, if fathers are as bad a bunch of ne’er-do-wells as Lockman pretends, why should they have even part-time custody of their kids?

Lockman treats us to statistics. Mothers still shoulder 65 percent of child-care work. Nowhere in the ATUS over the past 16 years do women do anything like 65% of the childcare. Wage Gap Myth Exposed. If you believe women suffer systemic wage discrimination, read the new American Association of University Women (AAUW) study Graduating to a Pay Gap. 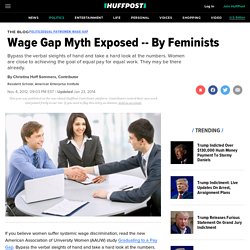 Bypass the verbal sleights of hand and take a hard look at the numbers. Women are close to achieving the goal of equal pay for equal work. They may be there already. ‘Equal Pay Day’ this year is April 2 - the next ‘Equal Occupational Fatality Day’ is on May 3, 2030. Every year the National Committee on Pay Equity (NCPE) publicizes “Equal Pay Day” to bring public attention to the gender earnings gap. 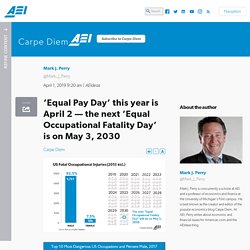 According to the NCPE, “Equal Pay Day” falls this year on Tuesday, April 2 based on an approximate 20% difference in unadjusted, raw median annual earnings according to either Census Bureau or BLS data, and therefore allegedly represents how far into 2019 women will have to continue working to earn the same income that the men earned in 2018, supposedly for doing the same job. 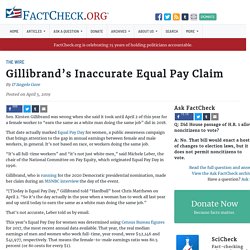 Kirsten Gillibrand was wrong when she said it took until April 2 of this year for a female worker to “earn the same as a white man doing the same job” did in 2018. That date actually marked Equal Pay Day for women, a public awareness campaign that brings attention to the gap in annual earnings between female and male workers, in general. It’s not based on race, or workers doing the same job. “It’s all full-time workers” and “it’s not just white men,” said Michele Leber, the chair of the National Committee on Pay Equity, which originated Equal Pay Day in 1996. Gillibrand, who is running for the 2020 Democratic presidential nomination, made her claim during an MSNBC interview the day of the event. “[T]oday is Equal Pay Day,” Gillibrand told “Hardball” host Chris Matthews on April 2. That’s not accurate, Leber told us by email. Los Angeles Times.

Forbes Fails About the Wage Gap. Details In BLS Report Suggest That Most Of The Gender Earnings Gap Is Explained By Age, Marital Status, Children, Hours Worked. Article here. 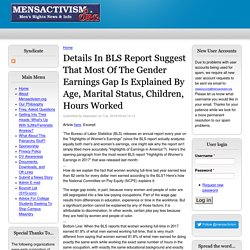 Www.forbes. Men from Mars, women from Venus: terrifying truth behind experts call for shortened work week girls. For centuries, women have been experts at juggling their relationships, careers, children, health and home all at once. 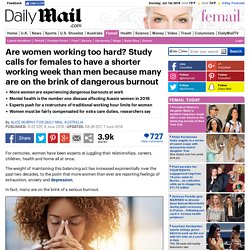 The weight of maintaining this balancing act has increased exponentially over the past two decades, to the point that more women than ever are reporting feelings of exhaustion, anxiety and depression. New Zealand Women’s Ministry Discovers Mothers’ Desire to Care for Their Kids. Theresa May Wrong on Wage Gap, Wrong on Shared Parenting. Do women get only 80 percent of the pay men do for the same job? On April 10 -- Equal Pay Day -- Sen. 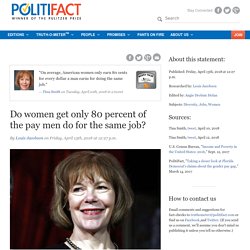 Tina Smith, D-Minn., tweeted out her support for an end to differential pay for men and women. Her tweet said, "It’s completely unacceptable that, on average, American women only earn 80 cents for every dollar a man earns for doing the same job. And the #paygap is even greater for most women of color. #EqualPayDay" But there’s a problem: The statistics showing that women earn 80 percent of what men earn are overall comparisons and do not specifically compare men and women occupying the same jobs.

After we reached out to Smith’s office, she sent a new tweet to correct her earlier misstatement. Let’s take a closer look at this commonly cited statistic. The most recent official data on this point, published by the U.S. However, as we’ve written previously, this figure actually refers to the general disparity between what men and women earn, not comparing cases of apples to apples. Our ruling Tina Smith U.S. Gender pay gap is perpetuated by teenage girls who want jobs that pay less, study finds. Total Work, Gender and Social Norms. NBER Working Paper No. 13000Issued in March 2007NBER Program(s): EFG LS Using time-diary data from 25 countries, we demonstrate that there is a negative relationship between real GDP per capita and the female-male difference in total work time per day -- the sum of work for pay and work at home. 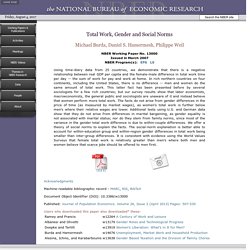 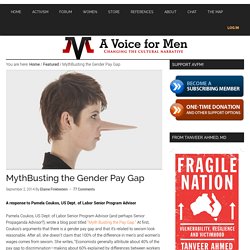 Men's E-News - There Is No Gender Wage Gap. What is the Average Hours Per Week Worked in the US? How many hours a week do American work? 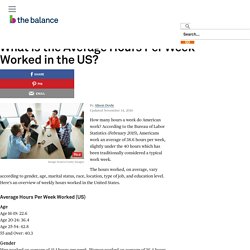 According to the Bureau of Labor Statistics (February 2015), Americans work an average of 38.6 hours per week, slightly under the 40 hours which has been traditionally considered a typical work week. The hours worked, on average, vary according to gender, age, marital status, race, location, type of job, and education level. Here's an overview of weekly hours worked in the United States.

Image copyright Dan Kitwood The number of men in low-paid part-time work has increased fourfold over the past 20 years. New research by the Institute for Fiscal Studies has found that one in five low-paid men aged 25 to 55 now work part-time. Revealed: The Gender Pay Gap Feminists Don't Want to Talk About. To little fanfare from the usual trumpeters of pay inequality, figures released last week highlighted a new, and growing, gender pay gap. Perhaps we can gain some insight into why the usual suspects lay silent when the latest tranche of data emerged from one of the few headlines it did garner: Earnings inequality among men soars. Men? On the rough end of the equal pay pineapple? Surely some mistake? Wrong. Untitled. The table above was inspired by the recent Washington Post article “Want college to pay off? These are the 50 majors with the highest earnings,” which was based on a report released by Glassdoor on Monday titled “50 Highest Paying College Majors.”

Glassdoor, an online employment website, analyzed nearly 500,000 resumes and corresponding salary reports to determine which college majors pay the highest median base salaries during the first five years following graduation. Most of those 50 college majors are displayed in the first two columns of the table above with their corresponding salaries. After seeing the Glassdoor report, I thought it would be interesting to analyze the gender composition of students earning bachelor’s degrees in those top 50 highest-paying college majors. Data Reveals Women Overwhelmingly Choose Lower-Paying College Majors. The research, conducted by AEI scholar Mark J. Perry who is a professor at the University of Michigan in Flint, argues that any gap in earnings between American men and women are the result of the different career field choices rather than employer discrimination.

According to Perry’s research, American women received 57% of all bachelor degrees granted in 2014, which equated to nearly 200,000 more degrees granted to females than to males. Despite this disparity, the degrees granted to women came overwhelmingly in lower-paying majors, such as Nursing, Journalism, and English. Pay Gap Studies Disprove Myth that Sexism Is Responsible. We expect to hear a lot of lies during an election year, and this year is certainly no exception. What is surprising is how old some of these lies are, and how often they have been shown to be lies, years ago or even decades ago. One of the oldest of these lies is that women are paid less than men for doing the same work. Like many other politically successful lies, it contains just enough of the truth to fool the gullible.

Women as a group do get paid less than men as a group. Hillary Clinton’s Faulty Numbers on Equal Pay Would Backfire on Women. Patents, Not Sexism, May Be Reason Women Lag in Venture Capital. While women own more than a third of all businesses in the U.S., companies run by them get only about 3 percent of venture capital funding. Is that one more example of sexism in Silicon Valley? Equal Pay? Every Day Men Work 48 Minutes More Than Women. Men Are Good. One of the most damaging things that has ever impacted our culture is fatherlessness. Back in 1965 Departent of Labor Secretary Moynihan did a report on the inner city and his report showed that it was not race or poverty that had deteriorated the inner city African American community, it was the absence of dads. We knew at that point, in 1965, that not having dads in the home was seriously injuring our families and our children.

OPINION: The misleading rhetoric behind the ‘equal pay’ movement - Daily Inter Lake: Members. (EDITOR’S NOTE: The Governor’s Equal Pay for Equal Work Task Force will meet Wednesday, June 29, at the University of Montana from 10 a.m. to 3 p.m. in the University Center Alumni Board Room.) On Equal Pay Day — which this year fell on April 12 — President Obama lamented the fact that American women make 77 percent of what American men make. Uk.businessinsider. T.J. Kirkpatrick/Getty ImagesShe's at least 9.4% behind those other guys. The recruitment consultancy Robert Half decided to get some early PR out of International Women's Day this Tuesday. Debunking the Wage Gap: We Are Not Victims. There is no gender pay gap. Do Women Really Want Equality? Equal Pay Day: What's really causing the gender wage gap, and how to fix it.

More from the Washington Examiner Also from the Washington Examiner Top Story. Australian women make 83¢ for every $1 dollar a man earns: report. Uk.businessinsider. Harvard prof. takes down gender wage gap myth. International Women's Day isn't the time to be pushing faulty pay gap statistics. International Women’s Day is a time to celebrate the vast achievements of women worldwide, while acknowledging the real struggles and oppression millions of women and girls continue to face, including violence, inequality under the law and limited access to education.

It is not a time to push faulty pay gap statistics. Yet that is exactly what happened yesterday. Businessinsider.com. Report: Gender Plays No Role in Tech Pay. Why are feminists so reluctant to offer practical advice to other women? The gender pay gap is dead. Bernie Sanders can't close the gender wage gap, because it's due to choice.