Raven Davis. Uk.pinterest. Gender systems. This Bearded Bride Will Challenge How You Think About Beauty. 'GenderFlux' Fashion Label Caters to a Diverse Genderfluid and Non-Binary Audience. Follow my blog with Bloglovin Like Us On Facebook When you go into most clothing stores these days, their clothes will be separated into ‘male’ and ‘female’ sections based on how feminine or masculine the designs are. 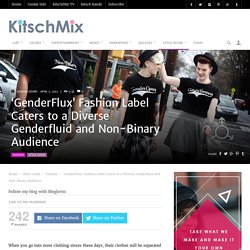 Not only is this a pointless move on the retailer’s part (clothes are just clothes and should not be inherently gendered) but it’s also discriminatory to those who don’t identify as male or female (or identify as both) and are just out to buy some new threads – without misgendering themselves in the process. Furthermore, because of the way that clothes are gendered in stores it means that genderfluid or non-binary folks often fail to find clothes that fit them, as they are designed to fit cisgendered bodies. Even when clothes do cater to non-cis people, those sizes tend to be on the small size. This dilemma is exactly why Elliott Alexzander’s style blog – House of Alexzander – has been such a huge success. “This came from my personal struggles. May 13, 2015 December 9, 2014. New Documentary "We Exist" Shows What It's Like to Live Outside the Gender Binary. Follow my blog with Bloglovin Like Us On Facebook When you use a public bathroom, when you’re shopping for clothes or even when you choose the place that you go and have your hair done, you are constantly forced to choose between male and female. 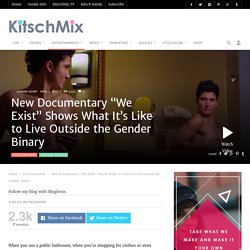 But what if you’re neither? Genderfluid Celebrities. Celebs. 30 Strikingly Beautiful Gender Non-Conforming/Gender Non-Binary Selfies. Too Queer for Your Binary: Everything You Need to Know and More About Non-Binary Identities. It’s begun to edge into the feminist mainstream that gender isn’t everything we always thought it had been. 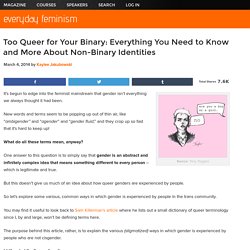 New words and terms seem to be popping up out of thin air, like “ambigender” and “agender” and “gender fluid,” and they crop up so fast that it’s hard to keep up! What do all these terms mean, anyway? One answer to this question is to simply say that gender is an abstract and infinitely complex idea that means something different to every person – which is legitimate and true. But this doesn’t give us much of an idea about how queer genders are experienced by people. So let’s explore some various, common ways in which gender is experienced by people in the trans community. The purpose behind this article, rather, is to explain the various (stigmatized) ways in which gender is experienced by people who are not cisgender.

What IS Gender? If asked to define it, they would have to take some time to really break down how they’ve heard it used and why. Fashion// Selfridges fight for gender rights with plans to stock only gender neutral clothing – Lippy: No Gloss Magazine – Politics, Fashion, Music, Art & more. This week it was announced that Selfridges, London have future plans to only stock gender-neutral clothes. 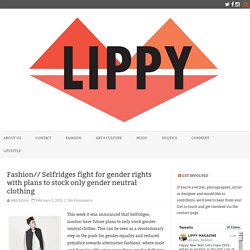 This can be seen as a revolutionary step in the push for gender equality and reduced prejudice towards alternative fashions, where male and females alike steer away from gender defining styles. The decision however is by far a brave one, as although it is common for girls to dress in masculine and baggy clothes, the image of a man in a skirt is not deemed desirable by all. “We want to take our customers on a journey where they can shop and dress without limitations or stereotypes,” a Selfridges spokesman told The Times. Styles will now focus on people; not gender, body forms or sexuality. This is a break through in pushing the boundaries of gender and allowing people to express, challenge and explore how they perceive their bodies without conforming their styles to their sexuality.

Words: Daisy Petley Image; Wiki Commons & Red Brick. Major fashion labels attack blogger for not conforming to gender roles. Among the myriad fashion bloggers on the Internet, Elliott Alexzander stands out as a talented model and designer who has grown increasingly well-known for their [Alexzander prefers a gender-neutral pronoun] non-binary, gender variant style. 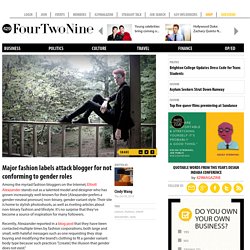 Their site is home to stylish photoshoots, as well as riveting articles about non-binary fashion and lifestyle. It's no surprise that they've become a source of inspiration for many followers. Recently, Alexzander reported in a blog post that they have been contacted multiple times by fashion corporations, both large and small, with hateful messages such as one requesting they stop buying and modifying the brand's clothing to fit a gender variant body type because such practices "[create] the illusion that gender does not exist. " The logic is simple: Anything that threatens rigidly gendered sales markets—menswear and womenswear—also threatens advertising, marketing, and the whole structure of the fashion industry. Transstudent_kyr_20120508. Genderpalooza! A Sex & Gender Primer. You probably already know what sex is (and no, not that kind of sex): the classification of a person (or plant or animal) based on whether their anatomy. 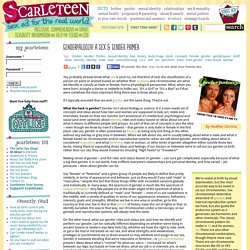 The Genderbread Person v2.0. Hundreds of comments, ditto emails, ditto Facebook messages and Twitter tweeters and in-person holla-atchas and I feel like I’m finally in a place to release this. 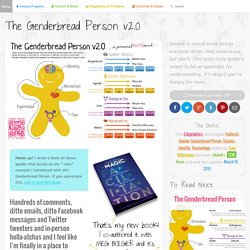 I give you the new and improved Genderbread Person! (click for larger size) Depending on what you folks have to say after checking this out and reading the rationale below, I’ll be updating the Breaking through the Binary article and uploading a printer-friendly version of the new graphic. But first, let’s rationalize. Guide4young-trans-inUK. Non-binary gender — Sexpression:UK. What does it mean to be non-binary?

Although people tend to think of gender as a strict binary (the idea that people are either men or women), in reality people are more complicated than that - and that's where non-binary people come in! A non-binary person is someone who identifies as something other than entirely a man or entirely a woman. This may mean that they feel more like a combination of both ('androgyne'); or that they feel like a man on some days, a woman on others, and/or a combination of the two at other times ('genderfluid'); or that they simply have no gender at all ('agender'). You may also have heard the word 'genderqueer', another, less formal term that some people prefer to 'non-binary'. The Trans Inquiry Report: A Non-Binary Summary. In the small hours of this morning, many of us could be found reading the Trans Inquiry report [1] as released by the Women and Equalities Commission at midnight. 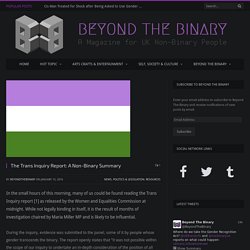 While not legally binding in itself, it is the result of months of investigation chaired by Maria Miller MP and is likely to be influential. During the inquiry, evidence was submitted to the panel, some of it by people whose gender transcends the binary. The report openly states that “it was not possible within the scope of our inquiry to undertake an in-depth consideration of the position of all non-binary and non-gendered people” [Page 5] and as such it doesn’t recommend steps for nonbinary inclusion and recognition as firmly and to the same extent as it does for binary trans people. . – It recommends a wholesale review that includes an investigation of the needs of nonbinary people within the next six months.

[Page 9] – It recommends that the UK offer the option of X as a gender marker on passports to anyone who asks for it. Meet Hari Nef, the transgender top model who is blurring fashion’s gender boundaries, all the latest styles. Nchita Wurst glistens in gold on high fashion shoot styled by Jean Paul Gaultier. She's the bearded diva who won over the globe after winning Europe's biggest entertainment contest last year. 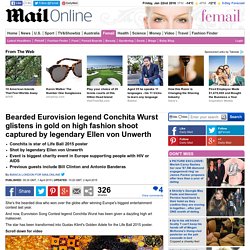 10 Myths About Non-Binary People It's Time to Unlearn. What’s the number one misconception about non-binary people? It’s that we don’t exist. In fact, if you Google “genderqueer is,” here are the top fill-ins that come up: “bullshit,” “a fad,” and “not real.” Awesome. But despite the many Googlers doubting us, we do exist — in multitudes! It’s just that there are very few spaces where we can be ourselves. Although many think that we don’t exist, ironically, there are still harmful stereotypes about us. , Imagine gender as a planet. All people grow up... The Other Sociologist. This page is a resource explaining general sociological concepts of sex and gender.

The examples I cover are focused on experiences of otherness. This Japanese Cosmetics Ad Uses Gender Fluidity To Make Its Point. There've been a number of people in the media lately who have challenged our ideas about who can—or should—be "pretty" as they move through the world. Not just transgender women like Caitlyn Jenner and Laverne Cox, but also men like Gerard Way and Adam Lambert, or the performers who've carried seven seasons of RuPaul's Drag Race. As a concept, gender—and thus femininity and the idea of who defines pretty—is a lot more fluid in our conception of it than it has been in the past few centuries.

The Art of Gender Fluidity: 9 Works That Show How Sexual Identity Has Evolved Over Art History. Effective date: February 12, 2014. Thank you for visiting Artspace.com (the "Site") owned and operated by Artspace LLC. ("Artspace"). Your use of the Site indicates that you have read, understood and agree to these terms of use ("Terms"). Vivienne Westwood on Transgender Rights and Gender Fluidity in Fashion. "I haven't told anyone this before, but when I was a teenager… I actually thought I was turning into a boy, and I didn't really care. Same-sex desire and gender identity. 12-35-49-nonbinary0213. Gender as a Spectrum and Transgender Identities. Exploring gender identity : The Facts. If you or someone you know is questioning or exploring your gender identity, you’re not alone. Resources for Gender-Nonconforming Children and Trans-Identified and Questioning Youth - Safe Schools Coalition.

A guide for young trans people in the UK: aims to offer information to young people who know they are trans or are confused about or questioning their gender in any way, so as to help clarify some of their questions and offer them language to express themselves. It was produced by a group of young trans people aged between 15 and 22 from the Sci:dentity group in conjunction with Gendered Intelligence and GALYIC, with support from Wellcome Trust & NHS. (pdf format) All God's Childrenbooklet: by Melany Burrill, for the "God Loves Each One Ministry" at Dumbarton United Methodist Church in Washington, DC, "is an essential guide to open and caring conversations with young children about gender and sexual orientation.

You'll find that this small, user-friendly book addresses your concerns, your questions, and your search for just the right words; it also suggests ideas for sermons and classroom activities. The Gender Spectrum. Illustration by Olaf Hajek When we meet a newborn baby, most of us ask the same question: boy or girl? Often, the answer is easy. Often, but not always. Meet Alex, a fourth-grader in Madison, Wis., with long, blond hair, a lanky build and a broad smile. When you meet Alex, you see a clever, confident kid who can move a mile a minute. Understanding Gender. Understandings of gender continually evolve.