#Egypt #PeopletoPeople. Los Angeles Times - We are currently unavailable in your region. Cairo Scene - CAIROSCENE EXCLUSIVE: THIS IS THE STORY OF... 6 Ecolodges in Egypt To Visit When You Need Peace Of Mind - El Konafa. 6 months ago By Konafa Team It’s really easy to feel overwhelmed these days: work stress, personal stress, family stress, country stress, traffic stress and that insidious anxiety that permeates even our moments of rest.

So maybe you decide to go on a vacation. But then even that can become stressful — you go to the same vacation spots as everyone else, and it just becomes an extended version of what you deal with in Cairo. EGYPT - UNTOLD. Sky, Sea, Sand, Footprints - Egyptian Backpackers. This is not a tourism ad, this is a real... Luxor Boutique Hotel. Tourism Ad by School students. Book the Next Flight to Aswan. Egyptian photographer Christine Salib’s strikes once again, this time with a Facebook album of Aswan that looks absolutely magical. 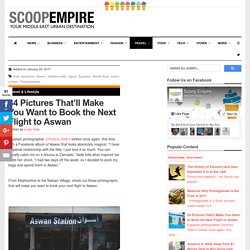 “I have a special relationship with the Nile, I just love it so much. You can usually catch me on a felucca in Zamalek,” Salib tells what inspired her to do her shoot. “I had two days off the week, so I decided to pack my bags and spend them in Aswan.” From Elephantine to the Nubian Village, check out these photographs that will make you want to book your next flight to Aswan. Via Christine Salib Select Staff Writers from the Scoop Empire Team by Scoop Team. ‫هي دي مصر‬‎ This is Egypt. Lazib Inn: Fayoum's Most Beautiful Hotel.

Refraining from trampling - er, frolicking - through the sunflower fields at Lazib Inn, Farah Hosny instead finds herself in a hot tub under the stars with a pizza in hand, taking in the beauty that is Fayoum. 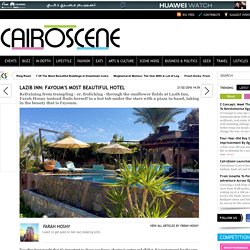 I’ve often been taught that it’s important to share; you know, sharing is caring and all that. It is tantamount for the very progression of humanity – the moral evolution of mankind, if you will – that you share the bounty that has been bestowed upon you with your fellow man. Then there are times when you’re like ‘fuck everyone; mine’! Like when it’s the last slice of pizza and the cheese is still gooey; Or the last stale donut. #Laffah (Original Music Video) / لفّة. Cairo By Instagramers. The 65 Best Destinations in All Egypt.

Environmental Therapy & Healing Climatotherapy in Pyramisa Isis Island in Aswan Who does not deserve some pampering while enjoying a lovely Nile view? 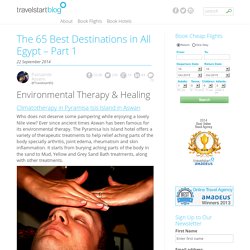 Ever since ancient times Aswan has been famous for its environmental therapy. The Pyramisa Isis Island hotel offers a variety of therapeutic treatments to help relief aching parts of the body specially arthritis, joint edema, rheumatism and skin inflammation. It starts from burying aching parts of the body in the sand to Mud, Yellow and Grey Sand Bath treatments, along with other treatments. Photo by Matt Davenport Gabal Dakrour (Dakrour Mountain) in Siwa Located in south eastern Siwa, that’s a place that’s worth driving all the way to Siwa for 12 hours from Cairo. Sand Dunes by Ernie R. This Is Egypt. CairoLapse. Egypt HD. Egypt’s Chaotic Beauty - ‘CairoLapse’ ‘CairoLapse’ Celebrates Egypt’s Chaotic Beauty For many tourists, Egypt’s chaotic beauty is hard to miss: from the constant car horns to the bustling markets and overly welcoming people. 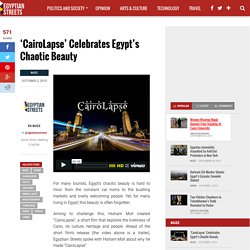 Yet, for many living in Egypt, this beauty is often forgotten. Aiming to challenge this, Hisham Moll created “CairoLapse”, a short film that explores the liveliness of Cairo, its culture, heritage and people. Ahead of the short film’s release (the video above is a trailer), Egyptian Streets spoke with Hisham Moll about why he made “CairoLapse”. What does Egypt mean to you? What does Egypt mean to me. About a year ago, I released a short film called “TampaLapse”. ‫عاصمة مصر الجديدة‬‎ ‫مصر العظمى ١٨٠٥ - ١٩٥٢‬‎ Things You'll Appreciate About Egypt While Living Abroad. 1. 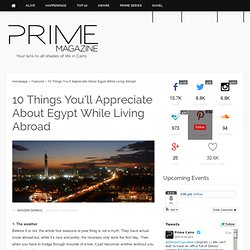 The weather Believe it or not, the whole four-seasons-a-year thing is not a myth. They have actual snow abroad but, while it’s nice and pretty, the niceness only lasts the first day. Then when you have to trudge through mounds of snow, it just becomes another workout you want to avoid. 2. Your nagging familyLiving on my own and having to actually feed myself was a struggle I never saw coming. Vintage Photos of Egypt’s Golden Years. 23 Vintage Photos of Egypt’s Golden Years A woman reading a magazine in the 1950s By Mohamed Khairat, Founder, EgyptianStreets.com Egypt in the 1900s was a different place. 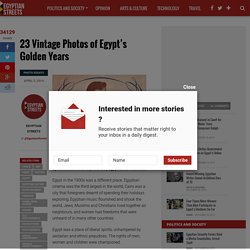 Egyptian cinema was the third largest in the world, Cairo was a city that foreigners dreamt of spending their holidays exploring, Egyptian music flourished and shook the world, Jews, Muslims and Christians lived together as neighbours, and women had freedoms that were unheard of in many other countries. Siwa's desert hotel. Prince Charles and the Duchess of Cornwall visited the socially-conscious Adrère Amellal resort in SiwaThere are no phones in the rooms and guests are not allowed to use their mobiles in public areas of the resort Buildings designed to look like they are rising out of the surrounding desert and all 40 rooms rely on candles for lightMeals are cooked using traditional methods and made using herbs and vegetables picked daily from the hotel garden By Anucyia Victor for MailOnline Published: 10:48 GMT, 21 August 2014 | Updated: 11:25 GMT, 21 August 2014 This amazing Egyptian eco-hotel, which looks like it rises up out of the desert, has no electricity and bans mobile phones outside the bedrooms. 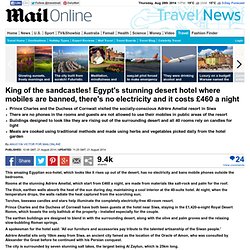 Rooms at the stunning Adrère Amellal, which start from £460 a night, are made from materials like salt-rock and palm for the roof. The thick, earthen walls absorb the heat of the sun during day, maintaining a cool interior at the 40-suite hotel. Surreal Beach Getaways in Egypt. Article co-authored by Farida M. 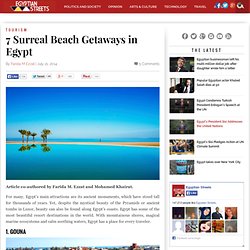 Ezzat and Mohamed Khairat. For many, Egypt’s main attractions are its ancient monuments, which have stood tall for thousands of years. Yet, despite the mystical beauty of the Pyramids or ancient tombs in Luxor, beauty can also be found along Egypt’s coasts. Egypt has some of the most beautiful resort destinations in the world. NUBIA - Croisière. This is How Beautiful Egypt Is!