The Truth Behind 'Men's Body Wash' And 'Women's Body Wash' Will Make You Feel Dirty. Jimmy Carter may have recently been diagnosed with brain cancer, but the dude has already won life. 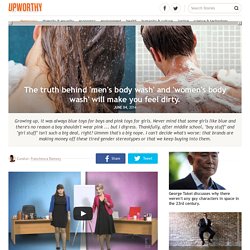 Photo by Larry Busacca/Getty Images. Despite his many detractors, Carter is straight-up one of America's most effective statesmen and all-around good guys of the 20th and 21st centuries. Yes, even during his presidency. In order to properly honor and pay tribute to a man who, after 91 years, continues to prove the haters wrong time and time again, here is a by-no-means-complete list of his major accomplishments, wins, and assorted awesome deeds. 1. It's hard to believe, but in 1978, the Middle East conflict was even more of a funhouse-mirror disaster pile than it is today. At Upworthy, we tell stories for a better world.Like us on Facebook to get them first: In 1977, Egypt and Israel began negotiating a tentative peace, but talks eventually hit a roadblock and both sides began preparing to deploy their shame fingers for the ol' affixing o' the blame. 2.

Stone. 3. Press: Bigotry in the bathroom. There are a lot of Bruce Springsteen fans in North Carolina. 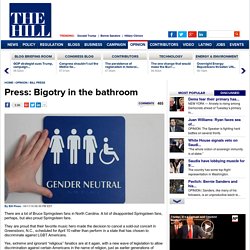 A lot of disappointed Springsteen fans, perhaps, but also proud Springsteen fans. They are proud that their favorite music hero made the decision to cancel a sold-out concert in Greensboro, N.C., scheduled for April 10 rather than perform in a state that has chosen to discriminate against LGBT Americans. Yes, extreme and ignorant “religious” fanatics are at it again, with a new wave of legislation to allow discrimination against certain Americans in the name of religion, just as earlier generations of Christians used the Bible to justify the practice of slavery. 64 Percent of Women Scientists Say They've Been Sexually Harassed Doing Field Work. Most women working in the sciences face sexual assault and harassment while conducting field work, according to a study released Wednesday that is the first to investigate the subject.

The report surveyed 516 women (and 142 men) working in various scientific fields, including archeology, anthropology, and biology. Sixty-four percent of the women said they had been sexually harassed while working at field sites, and one out of five said they had been victims of sexual assault. The study found that the harassers and assailants were usually supervisors. Ninety percent of the women who were harassed were young undergraduates, post-graduates, or post-doctoral students.

"Our main findings…suggest that at least some field sites are not safe, nor inclusive," Kate Clancy, the lead author of the study, said in a statement. Many university science programs require students to complete fieldwork. Men vastly outnumber women in the sciences. 7 Studies That Prove Mansplaining Exists. July 16, 2014 | Like this article? 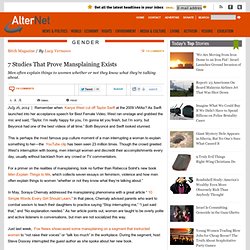 Join our email list: Stay up to date with the latest headlines via email. Remember when Kanye West cut off Taylor Swift at the 2009 VMAs? As Swift launched into her acceptance speech for Best Female Video, West ran onstage and grabbed the mic and said, “Taylor, I’m really happy for you, I’m gonna let you finish, but I’m sorry, but Beyoncé had one of the best videos of all time.” This is perhaps the most famous pop culture moment of a man interrupting a woman to explain something to her—the YouTube clip has been seen 23 million times.

For a primer on the realities of mansplaining, look no further than Rebecca Solnit’s new book Men Explain Things to Me, which collects seven essays on feminism, violence and how men often explain things to women “whether or not they know what they’re talking about.” In May, Soraya Chemaly addressed the mansplaining phenomena with a great article “ 10 Simple Words Every Girl Should Learn.” 1. 2. 3. Unspeakable Things review – Laurie Penny's dissection of modern feminism. Laurie Penny: she wants to dismantle binary gender codes. 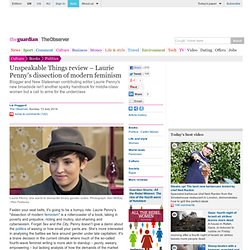 Photograph: Ken McKay / Rex Features Fasten your seat belts, it's going to be a bumpy ride. Laurie Penny's "dissection of modern feminism" is a rollercoaster of a book, taking in poverty and prejudice, rioting and mutiny, slut-shaming and cybersexism. Forget Sex and the City, Penny doesn't give a damn about the politics of waxing or how small your pants are. She's more interested in analysing the battles we face around gender under late capitalism. Of course these days we're spoilt for choice about how to navigate the pressures of contemporary womanhood – from Caitlin Moran's bestselling memoir/feminist polemic, How to Be a Woman (and now her new novel, How to Build a Girl) to recent books by the Vagenda girls, the Guardian's Hadley Freeman (Be Awesome: Modern Life for Modern Ladies) and Laura Bates, founder of the Everyday Sexism Project.

Laurie Penny is ridiculously precocious. At times, the book is one long roar of pain.