MAD MEN Mad Women.: EBSCOhost. Femvertising: Ads targeting women do plenty for brands. One of the crowd favorites, which had some women chuckling so hard they had tears in their eyes, has been seen more than 32 million times on YouTube and another 30 million-plus on Facebook. 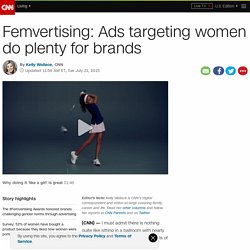 In the ad, a woman throws her daughter a "First Moon Party" after her daughter, using nail polish with glitter, pretends to have gotten her period for the first time. (Spoiler alert: The mom isn't fooled from the get-go!) The hilarious ad by HelloFlo, a heath company for women of all ages, was one of the winners of the first #Femvertising Awards, created by SheKnows Media, a digital women's lifestyle media company. Study of Gender Pricing in NYC. Sexist beer ads: why it's time for a cold, hard rethink. Ads selling beer are well known for portraying men “escaping” their wives to enjoy a refreshing pint, or for objectifying women as their main selling point.

The Campaign for Real Ale recently came under fire for distributing leaflets featuring corset-clad models. Meanwhile, sexist beer names abound, from British beers such as BrewDog’s Trashy Blonde, Celtic Marches’ Slack Alice, York Brewery’s Naughty Noelle and Hornbeam Brewery’s Knicker-Mocha-Muffdive to US brews such as Bare Ass Blonde, Tramp Stamp, Leg Spreader and Psychotic Blonde. They are often matched by explicit and misogynistic pump-clip images. What’s even worse is that the “jokes” often veer towards the territory of sexual violence. One US beer is entitled Thong Remover Tripel, while another allegedly named “Mouth Raper” hit the headlines last year.

“Peroni has moved away from the lager lout college frat impact,” said Clark. Depressingly Real Examples of Sexism in Meat Marketing - PlenteousVeg. It is Women’s History Month and, despite what the morons on Capitol Hill are saying, sexism is far from over. 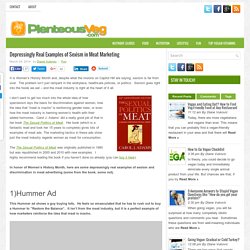 The problem isn’t just rampant in the workplace, healthcare policies, or politics. Sexism goes right into the foods we eat – and the meat industry is right at the heart of it all. I don’t want to get too much into the whole idea of how speciesism lays the basis for discrimination against women, how the idea that “meat is macho” is reinforcing gender roles, or even how the meat industry is harming women’s health with their added hormones. Are TV Ads Getting More Sexist? How sexism in ads has changed in the last 50 years as women emerged through the feminist revolution, took the lead in higher education, and achieved parity in the labor force YOUTUBE/GoDaddy The Atlantic's special series on ads, brands, and the science of shopping wraps up this week, but we couldn't finish without addressing one lightning rod of marketing: sexism in advertising.

The first question to address when writing about sexism in advertising is: Where do you even begin? It's a true cliché to point out that women are objectified in ads, including those selling products to women. But the nakedization of advertising isn't female-specific. Confronting sexism in the marketing industries – women react to The Drum's Women in Marketing study. The 10 Most Sexist Ads of 2013. Sexist Ads. Marketing%20Madness. How men and women shop online. Data on gender-based shopping preferences are interesting and valuable information that can be used by anyone running an online store. 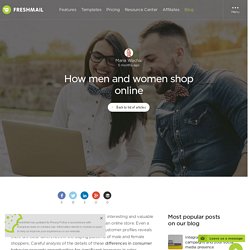 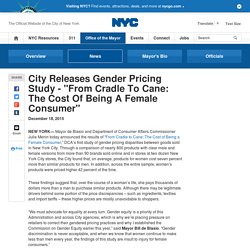 Through a comparison of nearly 800 products with clear male and female versions from more than 90 brands sold online and in stores at two dozen New York City stores, the City found that, on average, products for women cost seven percent more than similar products for men. In addition, across the entire sample, women’s products were priced higher 42 percent of the time. These findings suggest that, over the course of a woman’s life, she pays thousands of dollars more than a man to purchase similar products. Should Men’s Products Fear a Woman’s Touch? - HBS Working Knowledge - Harvard Business School. Most eight-year-olds are familiar with cooties: an imaginary infectious disease spread through proximity to children of the opposite sex. 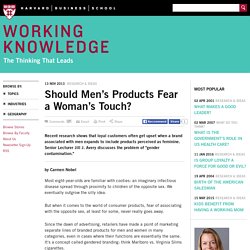 We eventually outgrow the silly idea. But when it comes to the world of consumer products, fear of associating with the opposite sex, at least for some, never really goes away. Since the dawn of advertising, retailers have made a point of marketing separate lines of branded products for men and women in many categories, even in cases where their functions are essentially the same.

It's a concept called gendered branding: think Marlboro vs. Virginia Slims cigarettes. “Even though there was a functional need for men to drink lower-calorie soda, men couldn't bridge the gender gap image-wise without a new brand and product just for them” Women Are Charged a ‘Female Tax’ on Consumer Items. Gender-Targeted Packaging: 10 Packages Designed to Appeal to Men or Women. We all know that a product’s packaging is its first (and often best) marketing tool. 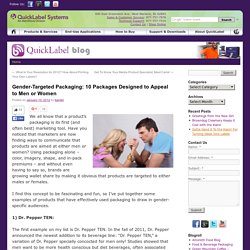 Have you noticed that marketers are now finding ways to communicate that products are aimed at either men or women? Using packaging alone – color, imagery, shape, and in-pack premiums – and without even having to say so, brands are growing wallet share by making it obvious that products are targeted to either males or females. I find this concept to be fascinating and fun, so I’ve put together some examples of products that have effectively used packaging to draw in gender-specific audiences. 1) Dr. Pepper TEN: The first example on my list is Dr. Them – understandable. Not only did Dr. The results from the test markets proved to more than exceed expectations. 2) Diet Coke – For Women Diet Coke recently (Jan 9) launched a new marketing campaign in Europe to target the female demographic. 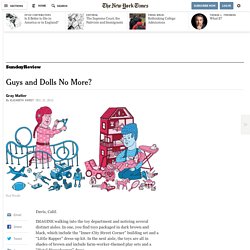 IMAGINE walking into the toy department and noticing several distinct aisles. In one, you find toys packaged in dark brown and black, which include the “Inner-City Street Corner” building set and a “Little Rapper” dress-up kit. In the next aisle, the toys are all in shades of brown and include farm-worker-themed play sets and a “Hotel Housekeeper” dress. If toys were marketed solely according to racial and ethnic stereotypes, customers would be outraged, and rightfully so. Why I Bought Boys' Underwear For My Daughter. Written By Tom Burns. 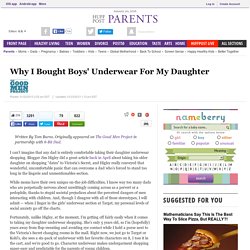 Originally appeared on The Good Men Project in partnership with 8-Bit Dad. I can’t imagine that any dad is entirely comfortable taking their daughter underwear shopping. Blogger Jim Higley did a great article back in April about taking his older daughter on shopping “dates” to Victoria’s Secret, and Higley really conveyed that wonderful, uncomfortable panic that can overcome a dad who’s forced to stand too long in the lingerie and unmentionables section. While moms have their own unique on-the-job difficulties, I know way too many dads who are perpetually nervous about unwittingly coming across as a pervert or a pedophile, thanks to stupid societal prejudices about the perceived dangers of men interacting with children.

And, though I disagree with all of those stereotypes, I will admit -- when I linger in the girls’ underwear section at Target, my personal levels of social anxiety go off the charts. Toys 'R' Us U.K. Agrees To End Gender Marketing In Response To 'Let Toys Be Toys' Campaign. Toys "R" Us announced Friday that its U.K. stores will stop labeling toys "boys" and "girls. " Then-And-Now Photos Of The Girl From That Iconic LEGO Ad Show Just How Much Has Changed. What a difference 33 years makes. Mom Calls Out Target For 'Unnecessarily Gendered Marketing' A Target store categorized a particular set of toys by gender, and Twitter users aren't too happy about it. Abi Bechtel spotted a sign at a Target store in Green, Ohio, that identified an aisle of toys as "Building Sets" and "Girls' Building Sets. " Seeing no need to have such distinctions, the mother of three expressed her disapproval on Twitter.

"The sign communicates that girls aren't part of the intended market for building sets -- regular building sets are for boys, and there are special, different sets for girls," Bechtel said in an email to The Huffington Post. Other Twitter users agreed that the descriptions were blatantly sexist. Since Monday, Bechtel's tweet has been retweeted more than 1,800 times. "It says, 'We know you wouldn't otherwise look for toys for girls over here with the building sets -- this is boy territory,'" she said. According to the Daily Dot, the spokesperson also said that the sign was never intended to send a sexist message. Toys Are More Divided by Gender Now Than They Were 50 Years Ago. Gender-Based Marketing: A Thing of the Past? - Page 3 of 3 - Target Marketing.