Stride Rite Ad Calls Girls Princesses, Boys Powerful, Outrages Parents (PHOTO) Yet another brand has angered parents by marketing to girls and boys separately and using antiquated gender stereotypes to do so. 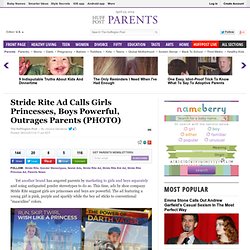 This time, ads by shoe company Stride Rite suggest girls are princesses and boys are powerful. The ad featuring a young girl is pink, purple and sparkly while the boy ad sticks to conventional "masculine" colors. Margot Magowan, a mom of three girls, wrote a letter to Stride Rite explaining why she will no longer be shopping there and posted it on her site, Reel Girl. "What’s with your gender stereotyping? I don’t get it. Magowan was also upset by the lack of female superhero apparel found at the store. Her main concern, is that gender marketing is starting to influence her kids. A representative from the store provided the following statement to the Huffington Post in an email: But this isn't the first time Stride Rite's marketing has been under fire.

Jezebel's Callie Beusman explains how this type of juxtaposition can also influence how kids behave. 5 Gender Stereotypes That Used To Be the Exact Opposite. The hardest stereotypes to break are the ones that are so old as to go all the way back to hunter-gatherer days. 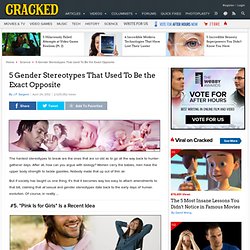 After all, how can you argue with biology? Women carry the babies, men have the upper body strength to tackle gazelles. Nobody made that up out of thin air. But if society has taught us one thing, it's that it becomes way too easy to attach amendments to that bill, claiming that all sexual and gender stereotypes date back to the early days of human evolution. Of course, in reality ... #5. For most families, finding out the gender of their baby early on is crucial, since everyone needs to know what color of clothes and toys to get them -- pink or blue?

Getty"Margaret, you get little Steve out of that outfit this instant. " If it's a girl, don't forget to paint the room pink and get pink curtains. But at One Time ... Gender role. Gender roles may be a means through which one may express their gender identity, but they may also be employed as a means of exerting social control, and individuals may experience negative social consequences for violating them.[2] Various groups have led efforts to change aspects of prevailing gender roles that they believe are oppressive or inaccurate, most notably the feminist movement. 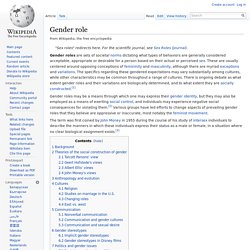 The term was first coined by John Money in 1955 during the course of his study of intersex individuals to describe the manners in which these individuals express their status as a male or female, in a situation where no clear biological assignment exists.[3] Background[edit] Some systems of classification, unlike the WHO, are non-binary or gender queer, listing multiple possible genders including transgender and intersex as distinct categories.[10][11] Gender roles are culturally specific, and while most cultures distinguish only two (boy and girl or man and woman), others recognize more. 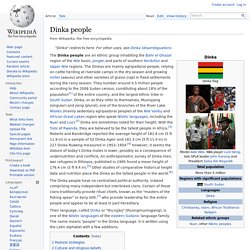 Certain of those clans traditionally provide ritual chiefs, known as the "masters of the fishing spear" or beny bith,[7] who provide leadership for the entire people and appear to be at least in part hereditary. Their language, called Dinka or "thuɔŋjäŋ" (thuongmuoingjang), is one of the Nilotic languages of the eastern Sudanic language family.

The name means "people" in the Dinka language. It is written using the Latin alphabet with a few additions. Pastoral strategies[edit] An example of rainy season temporary settlements—note the stilts upon which the huts are built to protect against periodic flooding of the region. An example of a cattle byre. These rainy season settlements usually contain other permanent structures such as cattle byres (luaak) and granaries. Cultural and religious beliefs[edit] Late nineteenth century photo of a Dinka girl. Notable Dinka[edit] Hijra (South Asia) Hijras, (Hindi: हिजड़ा, Urdu: ہِجڑا‎, Bengali: হিজড়া, Kannada: ಹಿಜಡಾ, Telugu: హిజ్ర Punjabi ਹਿਜੜਾ), also known as chhakka in Kannada and Bambaiya Hindi, khusra (ਖੁਸਰਾ) in Punjabi and kojja in Telugu, is used to refer to individuals in South Asia who are transexual or transgender.[1][2] Transgender people are also known as Aravani, Aruvani or Jagappa in other areas of India.[3] It is a common misconception among South Asians that hijras are "only men who have feminine gender identity, adopt feminine gender roles and wear women's clothing". 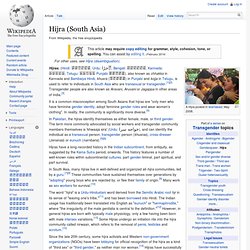 In reality, the community is significantly more diverse.[4] In Pakistan, the hijras identify themselves as either female, male, or third gender. The term more commonly advocated by social workers and transgender community members themselves is 'khwaaja sira' (Urdu: خواجه سرا‎), and can identify the individual as a transexual person, transgender person (khusras), cross-dresser (zenanas) or eunuch (narnbans).[5][6] Hijras belong to a special caste.