Articles and other resources associated with language and gender.

They them theirs: Beyond binaries: The world embraces gender-neutral pronouns. VP debate: Did gender play a role in the interruptions? How Trump talks about women - and does it matter? Image copyright Getty Images. 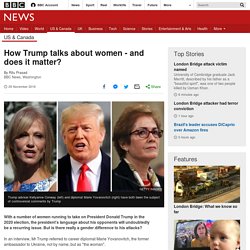 Sexism in dictionaries: why are 'hussy, baggage and filly' still used to describe a woman? Think of the word “woman” and do you automatically think “bitch”? 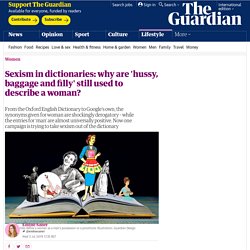 Or hussy, baggage or bit? These are, according to various traditional dictionaries, synonyms for “woman”, which came as a bit of a shock to Maria Beatrice Giovanardi as she typed the word into a search engine one night in January. Giovanardi was seeking inspiration as she tried to name a new project for the women’s rights group she was involved with and was looking for alternative words for “woman”. What she discovered instead was a wealth of derogatory entries. “They are offensive and I don’t believe they are synonyms for ‘woman’,” she says. Giovanardi started looking into it more deeply, using the default dictionaries on different search engines. Her call was shared on Twitter by the Fawcett Society. On Lexico, the site run by Oxford Dictionaries and Dictionary.com, synonyms for women include bitch, baggage, piece and filly. For “man”, the examples are far more impressive. Thousands demand Oxford dictionaries 'eliminate sexist definitions'

Almost 30,000 people have signed a petition calling for Oxford University Press to change the “sexist” definitions of the word “woman” in some of its dictionaries. 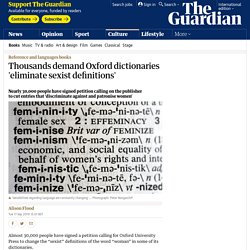 Launched this summer by Maria Beatrice Giovanardi, the petition points out that Oxford dictionaries contain words such as “bitch, besom, piece, bit, mare, baggage, wench, petticoat, frail, bird, bint, biddy, filly” as synonyms for woman. Sentences chosen to show usage of the word woman include: “Ms September will embody the professional, intelligent yet sexy career woman” and “I told you to be home when I get home, little woman”.

Is it OK to tell someone to 'man up'? Uptalk, vocal fry and using 'like' are signs you're linguistically savvy. Game of Thrones: How much do women speak in the show? *Warning: this article contains some spoilers for the series - but none for the final episode* Image copyright HBO/Sky Atlantic Female characters in Game of Thrones speak about three times less than male characters in the show, according to new data given to BBC 100 Women. 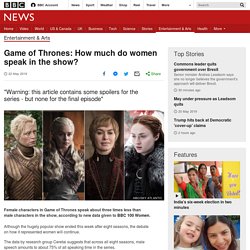 Although the hugely popular show ended this week after eight seasons, the debate on how it represented women will continue. The data by research group Ceretai suggests that across all eight seasons, male speech amounts to about 75% of all speaking time in the series. The share of female speaking time varied between seasons, starting at about a quarter in season one and rising slightly to a third by season seven. Move over Shakespeare, teen girls are the real language disruptors. Hate vocal fry? 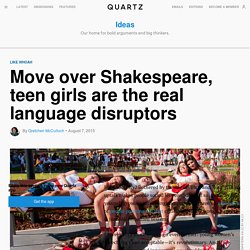 Bothered by the use of “like” and “just”? Think uptalk makes people sound less confident? If so, you may find yourself growing increasingly unpopular—there’s a new wave of people pointing out that criticizing young women’s speech is just old-fashioned sexism. The Power of Talk: Who Gets Heard and Why. The head of a large division of a multinational corporation was running a meeting devoted to performance assessment. A woman’s (shit)work is never done.

If your teenager’s ‘creaky voice’ bothers you, you may be behind the times. Have you noticed that teenager’s voice sounds unnaturally low and gravelly, like a door on rusty hinges, or a quacking duck? 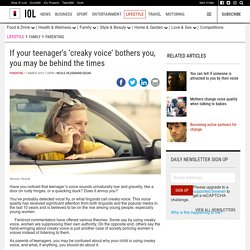 Does it annoy you? You’ve probably detected vocal fry, or what linguists call creaky voice. This voice quality has received significant attention from both linguists and the popular media in the last 10 years and is believed to be on the rise among young people, especially young women. Feminist commentators have offered various theories. Cameron, McAlinden, and O'Leary: "Lakoff in Context" (1988) 2018: the year of the war of the W-word – language: a feminist guide. Mind the respect gap. There’s a woman I know who does a lot of broadcast interviews, because she’s an expert on something that’s often in the news. 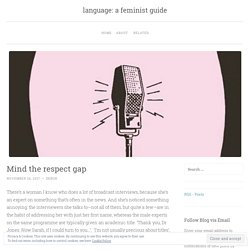 And she’s noticed something annoying: the interviewers she talks to—not all of them, but quite a few—are in the habit of addressing her with just her first name, whereas the male experts on the same programme are typically given an academic title. ‘Thank you, Dr Jones. Now Sarah, if I could turn to you…’. Gender-Neutral English, Dear? We’ve Been Using It For Centuries!

From cisgender to dysphoria: how to talk about gender and sexuality without causing offence - iNews. Language is one of the key paths to awareness, acceptance and empowerment, but, honestly, it can be confusing for many people.

There can be a lot to get to grips with, especially as society still has a long way to go in representing everyone within it. So, we’ve compiled this list of some common terms you may have heard, but may not have understood, to help introduce you to some of the essential terminology surrounding gender, sexuality and LGBTQ+ identity. This is not an exhaustive list, and language does change over time. The below are commonly accepted definitions for a selection of LGBTQ+ terms in popular usage at the time of writing.

Queer: An umbrella term for sexual and gender identities that are not heterosexual or cisgender. Princess, love, girl – when is a term of endearment not welcome? Media stereotype women in financial coverage, study finds. As campaigners continue to battle the gender pay gap, new research has shown huge discrepancies in the way men and women are spoken to about money in the media. 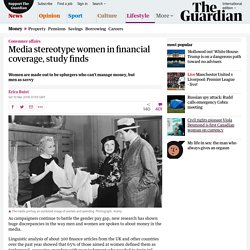 Linguistic analysis of about 300 finance articles from the UK and other countries over the past year showed that 65% of those aimed at women defined them as “splurgers”, excessive spenders with poor judgment who needed to “rein in” their spending and “limit” their outgoings in order to save. When the reader was female, the landscape of financial planning tended to be painted as complex and threatening, “a minefield”, and imagery tended to be of women who were emotionally or even physically overwhelmed – cowered by an oversized credit card, for example – and often included infantile imagery such as piggy banks and pennies. A third of articles also assumed women to be responsible for family support and care. One might argue that because of societal norms, the media reflects the different ways men and women regard money. BBC Radio 4 - Radio 4 in Four - Trans? Non-Binary? Genderqueer? CN Lester on language and gender identity. 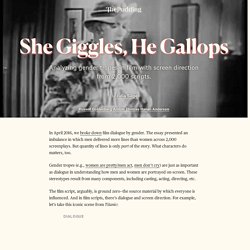 Do women writers use different language for women roles? What are the words that both male and female writers use about equally when describing characters? Would results change dramatically if there were more women writers? First, we will narrow the data set to the most commonly used 400 words. Words far away from an axis exhibit more dramatic differences. There are some directions where the writer’s gender makes no difference. Sexism and Shopping: Female Players Get Most of the Odd Questions at the U.S. Open - The New York Times.

The tennis finals of the United States Open are Saturday for the women and Sunday for the men. On the court, except for the number of sets, they all face the same rules. When they walk off the court, though, the game changes. Two years ago, Serena Williams was asked why she wasn’t smiling — a question some felt no one would have asked a man. After the Australian Open in 2012, another player was asked, “After practice, can you put tennis a little bit behind you and have dinner, shopping, have a little bit of fun?” Men and Women: No Big Difference. Archer, J. (2004). Sex differences in aggression in real-world settings: A meta-analytic review. Review of General Psychology, 8, 291-322. Language and Gender - Penelope Eckert, Sally McConnell-Ginet. Verbal Hygiene - Deborah Cameron. The Myth of Mars and Venus - Deborah Cameron.

English and Gender (by Deborah Cameron) Cameron - Tag Questions (pdf) Deficit, Dominance, Difference and Discursive: the changing approaches to language and gender. Belinda Mellor (English Language / Linguistics) In 1949 when Simone de Beauvoir made her statement regarding the ‘becoming’ of woman (The Second Sex [1949] 2009), she predicted the future of gender studies. Lingua Obscura: Young Women's Language Patterns at the Forefront of Linguistic Change.

Do men and women speak the same language? Do men and women speak the same language? Linguistics Research Digest: Language and gender. Do you think you would be able to guess the gender of the author of an anonymous tweet? Language and gender. Decoding Gender. Women use warmer language than men on Facebook, finds new research. Men talk to women differently on social media, says science. Research has shown that men talk very differently to women on social media and understanding that fact might help you communicate with the opposite sex. Language Of The Gender Gap: Why Job Descriptions Are Biased. Walmart’s efforts to revamp their career website and recruitment strategies over the past eighteen months failed to go far enough to address the gender-bias in job listings, according to Fortune’s Stacy Jones and Grace Donnelly. There's gender bias in the words used in job listings — Quartz. The Totally "Destructive" (Yet Oddly Instructive) Speech Patterns of... Young Women?

Trump talks like a woman. New Gmail Plug-In Highlights Words And Phrases That Undermine Your Message. Not a Ninja! How gendered language can influence job applications. Communication styles: Understanding gender differences. Women told to speak their minds to get on in boardrooms. Myths4-gender.pdf. Gender Communication Differences and Strategies. Gender Communication Differences and Styles. Famous quotes, the way a woman would have to say them during a meeting. Mansplain is Australian word of the year. How Joining 'Team Earth' Can Help End the Politics of Gender Difference