Why do you think they want us dead?

This pearl investigates the genetic alteration, creation, and cloning of living organisms which is happening on an exponential basis. Each one of us is being altered already, without our approval and in most cases without even the knowledge of.

It is called transhumanism...
I think the correct answer to this question... It was one that now seems obvious, although I hadn't considered it until I heard it given by Sarah Adams.
There is something called 'loosh.' (I'm not sure that is the correct spelling, but phonetically similar) If you're not familiar, it is the life force energy, the Hindu call it prana, the Asians refer to it as chi and Wilhelm Reich called it orgone.
To many this might be a concept you'd consider as 'woo woo' crazy. Sometimes, truth IS crazier than fiction!
The controllers and our matrix have been siphoning off our life force energy as food, maintain mind control, and to manifest their desired outcome when working dark rituals. Bottom line, the more life force energy you have the healthier and stronger you are.
Unfortunately, and for the majority, it is now running very low. This would be due to the many toxins in us and the modifications which have been done to us. Also, the EMF and other frequencies are now blocking our ability to naturally absorb it and causing holes and damage to the energy body (aura). The aura is our invisible shield of protection and needed for the physical body to maintain health or to heal.
I think low life force energy is the main reason they call us 'useless eaters' and want most of us dead.

2006 "Prick" Caused 25% DECLINE IN BIRTH RATES!!! Media Silence. Transhumanism might seem unlikely to you, but.. Animals science wants to bring back from extinction. ILLUMINATI CELEBRITIES EXPOSED The Clones Part 1 and Part 2. IS THE GOVERNMENT HIDING LIVING GIANTS TO CREATE ÜBERMEN ON EARTH? HUMANOIDS and Synthetics. ‘Survival of the Fittest” Collapse Event Underway! U.S. Population In TROUBLE! The Posthuman World - Michael Tsarion. Synthetic Forests: The Enormous Risks of Genetically Engineered Trees. 12th March 2016 By Dr Joseph Mercola Guest Writer for Wake Up World If the biotech industry has its way, 184 million acres of native forests around the world will be bulldozed down and replaced with plantations of genetically engineered (GE) trees. 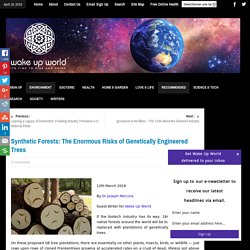 On these proposed GE tree plantations, there are essentially no other plants, insects, birds, or wildlife — just rows upon rows of cloned Frankentrees growing at accelerated rates on a crust of dead, lifeless soil above dwindling groundwater reserves. Moreover, GE trees are being genetically engineered with unnatural characteristics, such as the ability to kill insects, tolerate colder temperatures, resist toxic chemicals, and grow faster — but these “advantages” come at an unacceptable price.

Why Genetically Engineer Trees? Industry wants to market designer trees with a variety of traits that will increase their income-generating capacity — at least over the short-term. Paleontologist Who Inspired "Jurassic Park" Says Scientists Could Create Dinosaurs Within 5 Years. By John Vibes Paleontologist Dr. 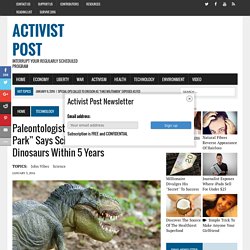 Jack Horner predicted in a recent interview that scientists will have the ability to genetically engineer living dinosaurs within five years. Horner was actually the real-life inspiration for the Jurassic Park series who advised Steven Spielberg during the filming of the movies. Shocking totally shocking !!! (8) There creating humans called synthetics. Alien Agenda V: World Zionists Play Russian Roulette With Alien ETs. Saturday, July 19th, 2014 Have Ruling Super-elite Deviants set up a Secret Cell of Nuclear Weapon Scientists to covertly and quickly develop advanced Nuclear Devices they can then deploy to depopulate Planet Earth by 90%, in order to avoid a threatened 100% Global Depopulation ” Reset” by Alien ETs which would include themselves? 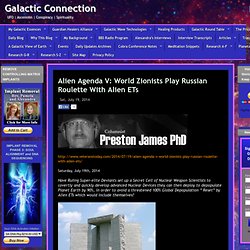 Note: This article is written for retired military and Intel with advanced knowledge of Space War matters and Alien ET visitors. If you have not examined all the evidence of such matters that was presented in previous Secret Space War articles, you are probably wasting your valuable time reading this and it will seem like nonsense to you. Why Most Humans Are Like Domesticated Animals. Most adults of today think that they are civilized and educated enough to make informed and responsible decisions. 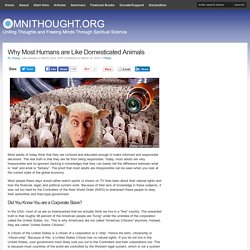 The real truth is that they are far from being responsible. Today, most adults are very irresponsible and so ignorant (lacking in knowledge) that they can barely tell the difference between what is “real” and what is “fantasy”. The proof that most adults are irresponsible can be seen when you look at the current state of the global economy. Most people these days would rather watch sports or shows on TV than learn about their natural rights and how the financial, legal, and political system work. 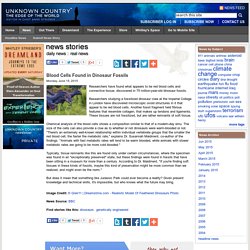 Researchers studying a fossilized dinosaur claw at the Imperial College in London have discovered microscopic ovoid structures in it that appear to be red blood cells. Another fossil fragment held fibrous features that resemble collagen, that makes up tendons and ligaments. These tissues are not fossilized, but are rather remnants of soft tissue. Chemical analysis of the blood cells shows a composition similar to that of a modern-day emu. Paleontologist Plans to Create Dinosaur Within 10 Years. Joshua Krause The Daily Sheeple June 4th, 2015 2,534 views. 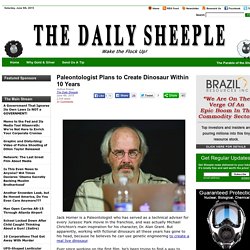 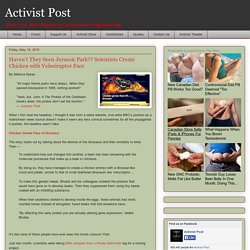 Have Ruling Super-elite Deviants set up a Secret Cell of Nuclear Weapon Scientists to covertly and quickly develop advanced Nuclear Devices they can then deploy to depopulate America by 90%, in order to avoid a threatened 100% Depopulation ” Reset” by Alien ETs which would include themselves? 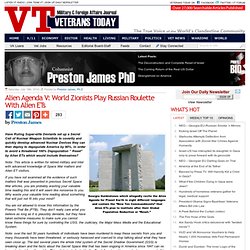 Note: This article is written for retired military and Intel with advanced knowledge of Space War matters and Alien ET visitors. If you have not examined all the evidence of such matters that was presented in previous Secret Space War articles, you are probably wasting your valuable time reading this and it will seem like nonsense to you. Dinosaurs Still Alive in African Jungle Today. 130 million-year-old 'sea monster' found. Plesiosaurs were common in the prehistoric seas. 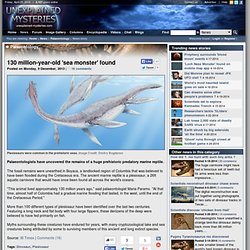