Automating Tinder with Eigenfaces. While my friends were getting sucked into "swiping" all day on their phones with Tinder, I eventually got fed up and designed a piece of software that automates everything on Tinder. 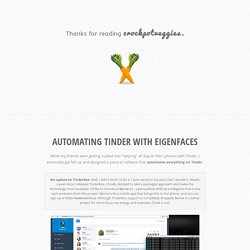 An update on Tinderbox: Well, I didn't think I'd do it. I even wrote in my post that I wouldn't. Nearly a year since I released Tinderbox, I finally decided to take a packaged approach and make the technology more available. I'd like to introduce Bernie A.I., a personified artificial intelligence that is the next evolution from this project. Bernie is be a mobile app that brings this to the phone, and you can sign up at Although Tinderbox support is completely dropped, Bernie is a better project for me to focus my energy and maintain. Since Tinder’s rising popularity, including its use by Olympic athletes such as snowboarder Rebecca Torr, Tinder has achieved critical adoption as a launchpoint for singles meeting singles.

Dubbed "Tinderbox", the first version only took 3 weeks to build. Matchmaker, Matchmaker, Make Me A Spreadsheet. In mid-August, couples and lonely hearts packed a Brooklyn basement to hear scientists make sense of something the crowd could not: love. 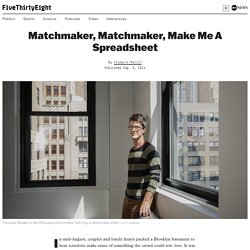 It was the 11th meeting of the Empiricist League, a kind of ad-hoc, small-scale TED Talks for scientists and the New Yorkers who adore them. In the back corner of the room, Christian Rudder sat by himself at the bar, nursing Stephen King’s “It.” Rudder, the 39-year-old president and co-founder of the online dating site OKCupid, had come to deliver a distilled version of what he’s been working on for the last five years.

Yes, genetics plays a part. No, it is not all genetics," Dora B. Goldstein, professor emeritus of molecular pharmacology, told the audience that attended the first in a series of public lectures sponsored by the Medical Center's Lesbian-Gay-Bisexual Community on March 9. "This shouldn't be too surprising because that is what all kinds of behavioral studies indicate.

In her noon presentation, Goldstein reviewed relevant research in a number of different areas: population studies, family studies, twin studies, genetic research, childhood behavior, and brain differences. Study: Science Can Change the Sexual Orientations of Mice - James Hamblin. By altering serotonin in their brains, researchers caused female mice to prefer to mount and sniff the genitals of other females. twoshortplanks / flickr PROBLEM: A Gallup poll last week said that 47 percent of people in the U.S. understand sexual orientation to be congenital. 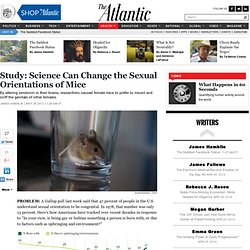 In 1978, that number was only 13 percent. Here's how Americans have tracked over recent decades in response to "In your view, is being gay or lesbian something a person is born with, or due to factors such as upbringing and environment? " As people's understanding changes, science is working to clarify what "born with" means. METHODOLOGY: Researchers led by Shasha Zhang at Peking University in Beijing and reviewed by Dr. RESULTS: Those mice with the mutations showed preferences for sniffing the head and genital areas of other female mice, as well as "try[ing] to grasp ... females by the waist before mounting on their back. ...

Homosexuality May Start in the Womb. From a strictly Darwinian viewpoint, homosexuality shouldn't still be around.

It isn't the best way to pass along one's genes, and to complicate the picture further, no "gay genes" have even been identified. According to a newly released hypothesis, the explanation may not lie in DNA itself. Instead, as an embryo develops, sex-related genes are turned on and off in response to fluctuating levels of hormones in the womb, produced by both mother and child. This tug of war benefits the unborn child, keeping male or female development on a steady course even amid spikes in hormones. But if these so-called epigenetic changes persist once the child is born and has children of its own, some of those offspring may be homosexual, the study proposes. Evolutionary geneticist William Rice of the University of California, Santa Barbara, felt there had to be a reason why homosexuality didn't just fade away down the generations.