Everyone Trump Touches Dies: The List - The Triad. Bill Barr? 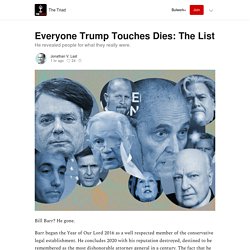 He gone. Barr began the Year of Our Lord 2016 as a well respected member of the conservative legal establishment. He concludes 2020 with his reputation destroyed, destined to be remembered as the most dishonorable attorney general in a century. The fact that he tried to salvage his legacy in the closing weeks of his tenure looks less like a man standing up and more like Meat Loaf. He would do anything for Trump. A wise man once prophesied that everything Trump touches dies. Trump ousts impeachment witness Gordon Sondland. The latest major Trump resignations and firings. Where Are They Now? Tiger Beat on the Potomac (thanks Charlie!) 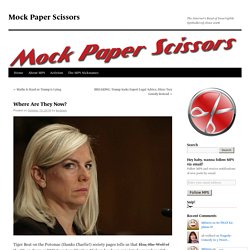 Society pages tells us that Elsa, She-Wolf of the SS, er, Former DHS Secretary Kirstjen Nielsen has been appointed a member of the administration’s National Infrastructure Advisory Council. 1) So I guess no one else would hire this ghoul and B) the next Infrastructure Week will be really ghastly, and will probably involve innovations in kiddie cages. Sharing Means Caring, fool! Like this: Like Loading... Related Who's Next To Be 'You're Fired'ed'? The WaPo tells us that Homeland Security Secretary Kirstjen Nielsen is the next big name to be given the ol' cheese sandwich and a roadmap. In "4th Reich" Away in a Manger I was heart-broken last night when I heard about Felipe Gómez Alonzo, an 8-year-old Guatemalan boy who died in the custody of immigration authorities after being treated for a cold. 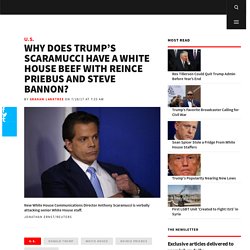 “I made a mistake in trusting in a reporter. It won't happen again,” Scaramucci wrote on Twitter. One Epic Photo Captures The Tension Between Anthony Scaramucci And Reince Priebus. Nation Not Sure How Many Ex-Trump Staffers It Can Safely Reabsorb. White House adviser asked FBI to dispute Russia reports. WASHINGTON — White House chief of staff Reince Priebus asked a top FBI official to dispute media reports that President Donald Trump's campaign advisers were frequently in touch with Russian intelligence agents during the election, a White House official said late Thursday. 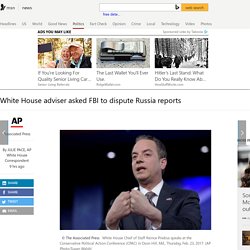 The official said Priebus' request came after the FBI told the White House it believed a New York Times report last week describing those contacts was not accurate. As of Thursday, the FBI had not stated that position publicly and there was no indication it planned to. The New York Times reported that U.S. agencies had intercepted phone calls last year between Russian intelligence officials and members of Trump's 2016 campaign team. Priebus' discussion with FBI deputy director Andrew McCabe sparked outrage among some Democrats, who said he was violating policies intended to limit communications between the law enforcement agency and the White House on pending investigations. Sen. Man At Point Where Thought Of Reince Priebus Controlling White House Pretty Comforting. Reince Priebus Sweating Secret Comey Memos, White House Sources Say.

President Donald Trump isn’t the only one in the White House who could be caught in a compromising position by James Comey’s secret memos. 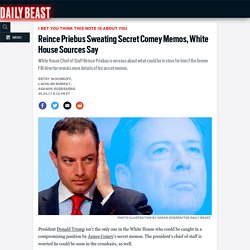 The president’s chief of staff is worried he could be soon in the crosshairs, as well. Comey, the former FBI director who was fired earlier this month by Trump, took detailed notes of his interactions with the president and senior Trump administration officials in order to properly document conversations that were on the verge of improper. Three White House officials told The Daily Beast that Chief of Staff Reince Priebus has privately expressed worry about a possible Comey memo specifically involving one of their reported chats, and how it might play in the press and to investigators. “Nervous laughter,” one official succinctly characterized Priebus’ demeanor in the midst of recent revelations. 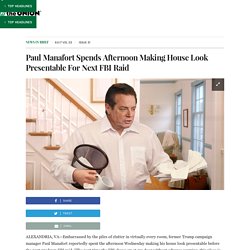 “The next time the FBI shows up at my door without advance warning, this place is going to be spick and span,” said Manafort, who fluffed couch cushions, folded a basket of freshly washed laundry, and then went room to room to empty waste baskets, noting that the house was so messy that the agents searching for incriminating documents must have thought he was a total slob. Hacked Texts Suggest Manafort Continued to Play a Role After Departing Trump Campaign. Trump Staffer Responsible For Finding Positive News Stories Resigns. How D.C. Lobbyists Helped Paul Manafort Prop Up a Putin Puppet. Taking a Putin ally to meet political heavyweights on Capitol Hill. 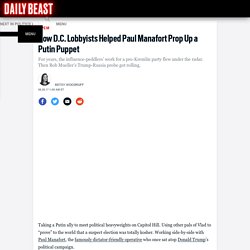 Using other pals of Vlad to “prove” to the world that a suspect election was totally kosher. Working side-by-side with Paul Manafort, the famously dictator-friendly operative who once sat atop Donald Trump’s political campaign. Those are just some of the moves that two of Washington’s most powerful lobbying firms made on behalf of a pro-Putin political party. For years, those efforts went largely ignored—just another instance of influence-peddling in a Washington full of it. But now, they’re being dragged into the light by Robert Mueller’s Trump-Russia probe. These firms, staffed with ultra-connected power brokers, are now facing questions from the special counsel because of work they did on behalf of that Kremlin-philic political party—work they didn’t disclose to the Justice Department for years. Paul Manafort’s Trump Tower apartment and 2 other NYC homes look like money laundering fronts: experts. 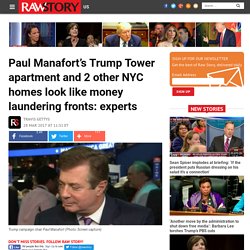 The former campaign chairman for President Donald Trump has come under investigation for his alleged ties to Russian and the ousted pro-Kremlin government in Ukraine, and his real estate career has raised new questions about his background, reported WNYC-FM. The NPR affiliate examined three transactions in New York City between 2006 and 2013, in which Manafort paid the full amount in cash, using a shell company, and without taking out a mortgage. Manafort then transferred the properties into his own name for no money and borrowed $12 million against those homes between April 2015 and January 2017 — a time frame that included his tenure as Trump’s campaign chairman, the station reported.

He’s taken out a total of $19 million in home equity loans — which are intended for home improvement — over the past five years on properties in New York City. The U.S. Trump tortured Spicer and Priebus. Now they get to tell investigators about Trump. Then-White House press secretary Sean Spicer, left, and then-Chief of Staff Reince Priebus in May. 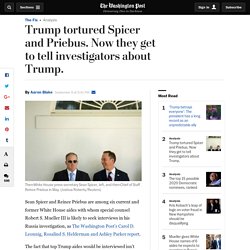 (Joshua Roberts/Reuters) Sean Spicer and Reince Priebus are among six current and former White House aides with whom special counsel Robert S. Mueller III is likely to seek interviews in his Russia investigation, as The Washington Post's Carol D. Leonnig, Rosalind S. Helderman and Ashley Parker report. The fact that top Trump aides would be interviewed isn't hugely surprising. But the subplots with Spicer and Priebus are particularly interesting. Trump’s upset over aide’s expected exit. The expected departure of President Donald Trump’s longtime bodyguard and aide, Keith Schiller, reportedly may have stemmed from new White House Chief of Staff John Kelly’s personnel and management changes in the West Wing, Bloomberg reported Tuesday, citing people close to Schiller and the president. 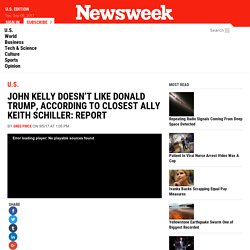 What’s more, Schiller believes Kelly, a former general, “doesn’t like” Trump personally and is only carrying out his duties for love of country, according to the report. Schiller’s departure, which was expected but perhaps may be happening sooner than he and Trump believed, was first reported Friday by CNN, but White House Press Secretary Sarah Huckabee Sanders told the network the story was “not true.” Keep up with this story and more by subscribing now But Schiller, a former New York City police officer and head of Trump Organization security, is reportedly expected to leave the White House and return to the more lucrative world of private security.

Trump aides begin looking for the exits. A fast-growing number of White House staffers are starting to look for the exits, even though the one-year mark of President Donald Trump’s first term is still months away. Many who joined the administration in January did so with the explicit idea that they’d stay for at least a year, enough to credibly say they’d served. But in the aftermath of a wave of abrupt, high-profile departures over the summer that culminated with former chief strategist Steve Bannon’s ouster in August, aides up and down the chain are reaching out to headhunters, lobbyists, and GOP operatives for help finding their next job. Story Continued Below Staffers from the National Economic Council — where director Gary Cohn is expected to be on his way out altogether after tax reform or onto a different role — as well as the communications shop and beyond are quietly exploring their next moves.

Staffers are already laying the groundwork through networking, lunches, and résumés sent to D.C.