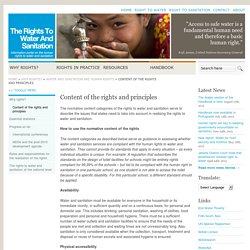 How to use the normative content of the rights The content categories as described below serve as guidance in assessing whether water and sanitation services are compliant with the human rights to water and sanitation. They cannot provide for standards that apply to every situation – as every individual situation is unique. Gender aspects water sanitation. Briefing Note How can water sanitation and hygiene help realise womens rights and gender equality. Enhancing gender equality post2015 the role of WASH. 30A-S6-P1-Christine_VerheidenACC. 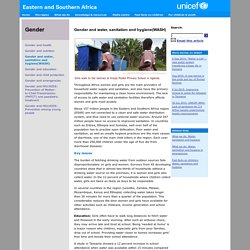 The lack of access to safe water and sanitation facilities therefore affects women and girls most acutely. About 157 million people in the Eastern and Southern Africa region (ESAR) are not connected to a clean and safe water distribution system, and thus need to use external water sources. Finca2. Water, Sanitation and Gender. The Terminology (Adapted from SUSANA-WG12 2009) Gender identifies the social relationships between women and men. 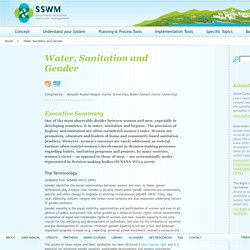 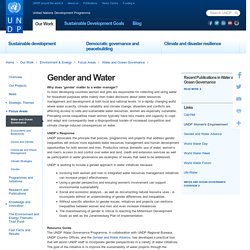 In most developing countries women and girls are responsible for collecting and using water for household purposes while mainly men make decisions about water resources management and development at both local and national levels. In a rapidly changing world where water scarcity, climate variability and climate change, disasters and conflicts are affecting access to safe and sustainable water resources, women are especially vulnerable. Prevailing social inequalities mean women typically have less means and capacity to cope and adapt and consequently bear a disproportional burden of increased competition and climate change induced consequences on water. UNDP’s Response UNDP advocates the principle that policies, programmes and projects that address gender inequalities will ensure more equitable water resources management and human development opportunities for both women and men. In-Depth: Running Dry: the humanitarian impact of the global water crisis. 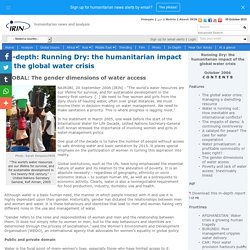 We must involve them in decision-making on water management. Un_water_policy_brief_2_gender. International Decade for Action 'Water for Life' 2005-2015. Gender, Class, and Access to WaterThree Cases in a Poor and Crowded Delta. O direito humano à água.