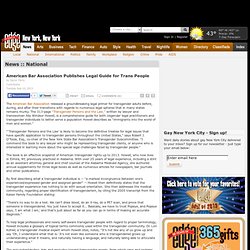 The 313-page "Transgender Persons and the Law," written by lawyer and transwoman Ally Windsor Howell, is a comprehensive guide for both cisgender legal practitioners and transgender individuals to better serve a population Howell describes as "immigrants into the world of men and women. " Pronouns / Minus18. Here Are 20 Examples of Cissexism That We've Probably All Committed at Some Point. “Dafuq is cissexism?”

That question’s a good place to start for an article such as this. Can’t follow the examples of something if you don’t know what the something is itself, right? Logic. Cissexism is pretty much unchecked cis privilege or an otherwise shoddy awareness of the social monopoly on binary gender. “A shoddy who on the what-now?” Basically, if you think—just a shot in the dark here—that there are only “boys” and “girls” in the world, or that—if I may be so bold—“boys” are defined by a “penis” and “girls” are defined by a “vagina,” you may be part of the cissexism problem.

The same goes for if you can’t figure out why I just put certain words in quotation marks. Now, to clarify: Cissexism isn’t necessarily a mindset that a person holds with either maliciousness or awareness. Hence the issue. Are you part of the problem? 1. Boom. In short, XY does not indicate a biological man and XX does not indicate a biological woman. Why not? 2. Oh, honey. 3. 4. 5. 6. 7. 8. 10 Trans Women Pioneers They Definitely Didn't Tell You About In History Class. It seems like when people talk about early trans pioneers from history we only ever hear two names — Lili Elbe and Christine Jorgensen. 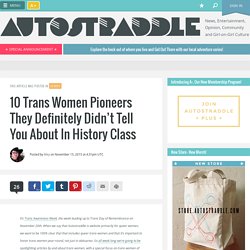 Things are getting better and now we also talk about TWOC leaders like Sylvia Rivera and Marsha P. Johnson. While it’s true that Elbe and Jorgensen are important historical figures, and while it’s true that Rivera and Johnson are legends who we owe worlds to, it’s also important to talk about other trans women who might be less well-known, but have had their own big impact on trans history. It’s usually pretty suspect to prescribe modern identities to people from the past, but no matter which way the deceased people on this list would identify if they were alive today, they remain important figures in the history of American (and some international) trans and gender non-conforming people and the way people challenge society’s rules for gender. As a general warning, some of the pages I’m going to link to contain misgendering and/or outdated terminology. My Family is Being Vile About My Cousin Being Trans. What Can I Do? Dear Autostraddle: “So, a lot of members of my family are being serious assholes about my cousin being trans. 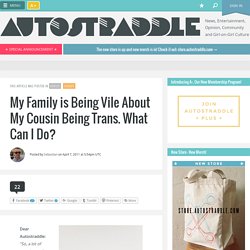 It just sucks to feel like I can’t really articulate to them why their attitudes are so shitty. The Top 10 Trans-Friendly Colleges and Universities. By Dr. 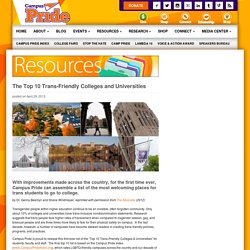 Genny Beemyn and Shane Windmeyer, reprinted with permission from The Advocate (2012) Transgender people within higher education continue to be an invisible, often forgotten community. Only about 10% of colleges and universities have trans-inclusive nondiscrimination statements. Research suggests that trans people face higher rates of harassment when compared to cisgender lesbian, gay, and bisexual people and are three times more likely to fear for their physical safety on campus.

In the last decade, however, a number of campuses have become stalwart leaders in creating trans-friendly policies, programs, and practices. Idol Worship: Julia Serano Talks To Autostraddle About Fixing Feminism. A lot of my favorite feminists are the feminists who stand up to the movement. 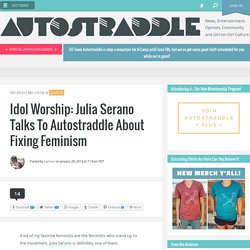 Julia Serano is definitely one of them. Julia describes herself as “a true Renaissance woman,” which is actually just code for there really is nothing she can’t do. Serano is, at most recent count, author of the Earth-shattering books Whipping Girl and Excluded, a biologist, a musician, a performer, and an activist. What brought me to Serano’s work, however, were the things she created last: her two books that completely challenged, confronted, and defeated notions of sexism and femininity that remained strongholds even within the mainstream feminist movement. I came of age as a feminist in college, having been pretty sheltered and innocent until I first looked around at a dorm room and realized nobody was watching me anymore. In order to love a movement, you have to push it.

I had the privilege of chatting with Julia for this week’s column about her moving, her shaking, and her band. Hi, Julia! The Truth About Transgender Suicide  For this year's transgender awareness week I wanted to write about something that the transgender community and its allies are often afraid to discuss. 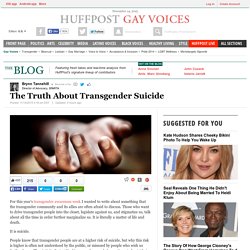 Those who want to drive transgender people into the closet, legislate against us, and stigmatize us, talk about all the time in order further marginalize us. It is literally a matter of life and death.