My daughter took a gap year... When my daughter, Alex, decided to take a gap year, I was nervous. 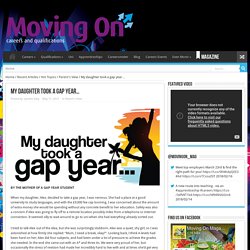 She had a place at a good university to study languages, and with the £9,000 fee cap looming, I was concerned about the amount of extra money she would be spending without any concrete benefit to her education. Safety was also a concern if Alex was going to fly off to a remote location possibly miles from a telephone or internet connection. It seemed silly to wait around to go to uni when she had everything already sorted out. I tried to talk Alex out of the idea, but she was surprisingly stubborn. Alex was a quiet, shy girl, so I was astonished at how firmly she replied: “Mum, I need a break, okay?”. Although Alex claimed she “wasn’t ready” for uni, I simply couldn’t picture her making her own way in the world. While Alex was away, all we could do was cross our fingers and hope. Now my younger son is coming to that age, I’ve learnt to trust my children to know what’s best for them.

Go on and share this page: Sans titre. Malala had life-saving surgery in the UK after being shot Pakistani schoolgirl and campaigner Malala Yousafzai, who was shot in the head by the Taliban, has won the EU’s Sakharov human rights prize. 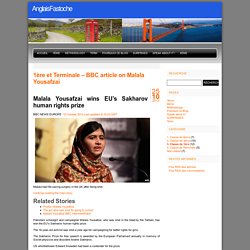 The 16-year-old activist was shot a year ago for campaigning for better rights for girls. The Sakharov Prize for free speech is awarded by the European Parliament annually in memory of Soviet physicist and dissident Andrei Sakharov. US whistleblower Edward Snowden had been a contender for the prize. The 50,000 euro ($65,000) prize is considered Europe’s top human rights award. Malala rose to prominence in 2009 after writing a blog anonymously for the BBC Urdu service about her life under Taliban rule and the lack of education for girls. She lived in Pakistan’s mountainous Swat Valley and her name became internationally known after the Pakistan army pushed the Taliban out of the area in 2009. 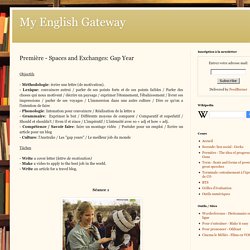 My English Gateway: Première - Spaces and Exchanges: Gap Year. Gap year. What is a gap year? 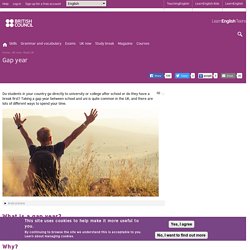 A ‘gap year’ is a period of time, usually an academic year, when a student takes a break from formal education. It is often spent travelling or working. Why? People used to think that taking a gap year was negative. In the past you took a gap year if you had to retake exams or had problems between finishing school and starting higher education and then starting a career. When? Young people in formal education usually take a gap year when they are about eighteen years old, before going to university.

Where and what? Many gap year students choose to do voluntary work. Popular gap year activities for young people looking for adventure include surfing in Hawaii, wake boarding in Italy, kite surfing in Egypt or bungee jumping in New Zealand. Lots of gap year students just want to see more of the world. What about money? Gap year: My dream year off for just £600. I volunteered through Global Xchange. 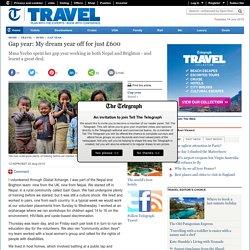 I was part of the Nepal and Brighton team: nine from the UK, nine from Nepal. We started off in Nepal, in a rural community called Gairi Gaun. We had undergone plenty of training before we started, but it was still a culture shock. We lived and worked in pairs, one from each country. In a typical week we would work at our volunteer placements from Sunday to Wednesday. Thursday was team day, and on Friday each pair took it in turn to run an education day for the volunteers. We lived in host homes, which involved bathing at a public tap and hand-washing our clothes. After this, all the British and Nepalese volunteers spent three months in Brighton. I was going to become a psychologist, but now after I graduate I hope to work in international development, linking the two.