Super Women Take To the Trenches! Synopsis: One boring night on Amazon Prime, I stumbled across the 2015 Russian WWI flick Battalion. featuring woman warriors marching to the front lines, bayonets fixed, ready to charge into no man’s land! 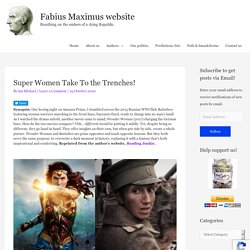 As I watched the drama unfold, another movie came to mind; Wonder Woman (2017) charging the German lines. How do the two movies compare? Uhh… different would be putting it mildly. Yet, despite being so different, they go hand in hand. They offer insights on their own, but when put side by side, create a whole picture. For months I slogged away at my Night Witches project, but there continued to be a mental stumbling block that I couldn’t quite get over; the Women’s Death Battalions established by Russia’s provisional government following the February Revolution and the abdication of the tsar in 1917. PODCAST 56: Douglas Murray talks about his new book The Madness of Crowds. Conservative intellectual Douglas Murray talks to Toby Young about the moral shortcomings of identity politics and the Marxist underpinnings of the Social Justice movement, both subjects of his new book The Madness of Crowds: Gender, Race, and Identity. 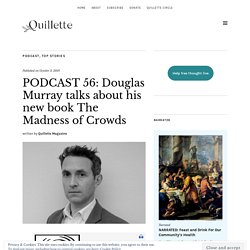 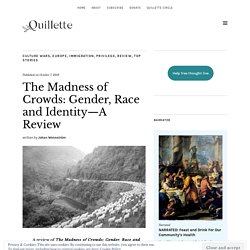 Elias Canetti was awarded the 1981 Nobel Prize in Literature for his fiction. But the Bulgarian-born German-language novelist also was noted for his non-fiction work about mob violence, religion and tyranny. Fake news about the “wage gap”, and the real gender gap. Twelve Scholars Respond to the APA’s Guidance for Treating Men and Boys. Introduction — John P. 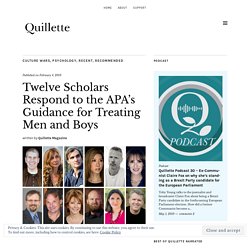 Wright, Ph.D. John Paul Wright is a professor of criminal justice at the University of Cincinnati. He has published widely on the causes and correlates of human violence. His current work examines how ideology affects scholarship. Follow him on Twitter @cjprofman. Academic Grievance Studies and the Corruption of Scholarship. This essay, although hopefully accessible to everyone, is the most thorough breakdown of the study and written for those who are already somewhat familiar with the problems of ideologically-motivated scholarship, radical skepticism and cultural constructivism. Part I: Introduction Something has gone wrong in the university—especially in certain fields within the humanities.

I nominate Suzanna Walters for the most hateful, venomous, vitriolic, and reprehensible op-ed in history of WaPountitled. Is It Sexual Harassment to Discuss this Article? Jordan Peterson recently tweeted that, “The STEM fields are next on the SJW hitlist. 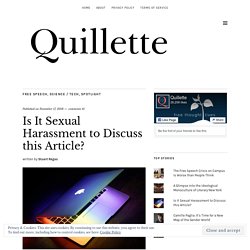 Beware, engineers.” I’m convinced that Peterson is correct and I feel that my ongoing case has allowed me to see a likely avenue of attack from those who support the equity agenda. They will characterize any discussion of sex differences, no matter how calm and rational, as a form of gender harassment which in turn constitutes sexual harassment. In other words, if you dare to discuss the science of sex differences—even at a university—there’s a good chance that you’ll be accused of violating US law. But I’m getting ahead of myself, so let me back up and explain in more detail. For me, it started when Google fired their engineer James Damore for daring to suggest that men and women are different and that those differences can explain much of the gender gap in tech. My article initially generated a great deal of interest.

And then the news came. How can this be considered harassment? Women, society, & the gender wars. Why Single Women Are (Way) More Likely to Own a Home Than Single Men. Chart of the Day: Declining Share of Women with Computer Science Degrees. Jordan Peterson: The gender scandal – in Scandinavia and Canada. In this occasional series, Jordan Peterson writes from his international speaking tour for his book, 12 Rules for Life, where he’s speaking to sold out crowds throughout North America, Europe and Australia. 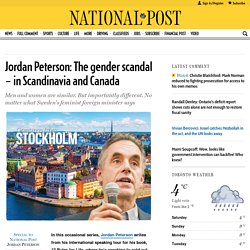 Part One (Scandinavia) Jordan Peterson: It’s ideology vs. science in psychology’s war on boys and men. The American Psychological Association (APA) recently released its Guidelines for Psychological Practice with Boys and Men. 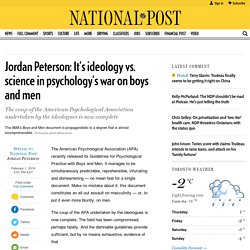 It manages to be simultaneously predictable, reprehensible, infuriating and disheartening — no mean feat for a single document. Make no mistake about it: this document constitutes an all-out assault on masculinity — or, to put it even more bluntly, on men. What the APA's Report on Men and Masculinity Really Tells Us: A Psychologist's Perspective. Because we didn’t have enough to be angry about, this week brought us another subject for outrage: the American Psychological Association (APA) hates men. 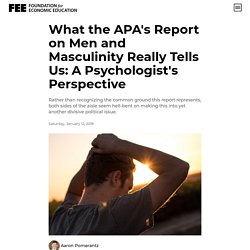 ALL MEN MUST WATCH THIS VIDEO! Jordan Peterson and Tucker on What's Happening to Men! StudioBrule. Harvard Study: "Gender Wage Gap" Explained Entirely by Work Choices of Men and Women. The Equal-Pay Myth That Just Won't Die. The Age That Women Have Babies: How a Gap Divides America. Becoming a mother used to be seen as a unifying milestone for women in the United States. 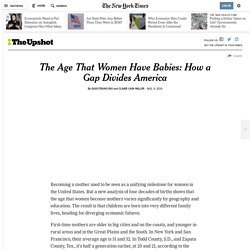 But a new analysis of four decades of births shows that the age that women become mothers varies significantly by geography and education. The result is that children are born into very different family lives, heading for diverging economic futures. Not All Gender Pay Gaps Are Worth Worrying About. Recent research on the ride-sharing app Uber has thrown up some remarkable findings about the gender pay gap, and male and female behavior more broadly. 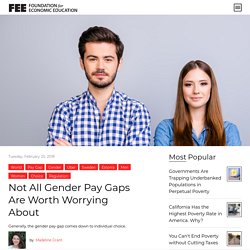 The report, by economists from Stanford University and the University of Chicago, was truly a one-of-a-kind study. Researchers were granted access to Uber’s gargantuan datasets, with insights into millions of drivers and journeys. Crucially, the nature of Uber’s platform model eliminated from the outset most of the reasons typically blamed for the gender pay gap. Uber’s ride-allocating algorithm is gender-neutral and offers full flexibility to its users. Driver compensation involves no bargaining, thereby removing any advantage that men might have in negotiating as a possible factor in wage differentials. A New Labor Dept. Report Reveals the Bulk of the Gender Earnings Gap Can Be Explained by Age, Hours Worked, and Marital Status.

The Bureau of Labor Statistics (BLS) releases an annual report every year on the “Highlights of Women’s Earnings” (since the BLS report actually analyzes equally both men’s and women’s earnings, one might ask why the report isn’t simply titled more accurately “Highlights of Earnings in America”?). Here’s the opening paragraph from the most recent BLS report “Highlights of Women’s Earnings in 2017” that was released last month: In 2017, women who were full-time wage and salary workers had median usual weekly earnings that were 81.8 percent of those of male full-time wage and salary workers.

Camile Paglia on the indispensability of men, who do the dangerous, dirty work that makes our modern economy possible. Below are the final two paragraphs of Camile Paglia’s opening statement at the Munk Debate, “Resolved: Men Are Obsolete” held in Toronto in November 2013, and which appeared in Time Magazine in December 2013with the title “It’s a Man’s World, and It Always Will Be” (subtitled: The modern economy is a male epic, in which women have found a productive role — but women were not its author): Men are absolutely indispensable right now, invisible as it is to most feminists, who seem blind to the infrastructure that makes their own work lives possible.

It is overwhelmingly men who do the dirty, dangerous work of building roads, pouring concrete, laying bricks, tarring roofs, hanging electric wires, excavating natural gas and sewage lines, cutting and clearing trees, and bulldozing the landscape for housing developments (see table above). ‘Equal Pay Day’ this year is April 10 — the next ‘Equal Occupational Fatality Day’ is on May 30, 2029. Every year the National Committee on Pay Equity (NCPE) publicizes “Equal Pay Day” to bring public attention to the gender earnings gap. According to the NCPE, “Equal Pay Day” falls this year on April 10 based on a 19.5% difference in unadjusted, raw median annual earnings in 2016 according to Census Bureau data, and therefore allegedly represents how far into 2018 women will have to continue working to earn the same income that the men earned in 2017, supposedly for doing the same job. Inspired by Equal Pay Day, I introduced “Equal Occupational Fatality Day” in 2010 to bring public attention to the huge gender disparity in work-related deaths every year in the United States.

“Equal Occupational Fatality Day” tells us how many years and days into the future women will be able to continue to work before they will experience the same number of occupational fatalities that occurred for men in the previous year.