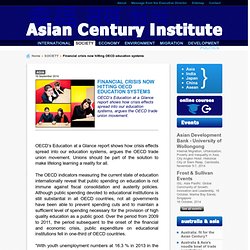 OECD’s Education at a Glance report shows how crisis effects spread into our education systems, argues the OECD trade union movement. Unions should be part of the solution to make lifelong learning a reality for all. The OECD indicators measuring the current state of education internationally reveal that public spending on education is not immune against fiscal consolidation and austerity policies. Although public spending devoted to educational institutions is still substantial in all OECD countries, not all governments have been able to prevent spending cuts and to maintain a sufficient level of spending necessary for the provision of high quality education as a public good. “With youth unemployment numbers at 16.3 % in 2013 in the OECD area alone, policy makers took a turn in a wrong direction. Asian Century Institute - India's skills crisis. 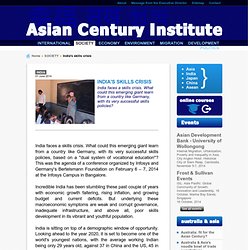 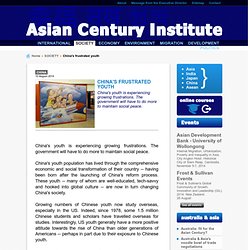 The government will have to do more to maintain social peace. China's youth population has lived through the comprehensive economic and social transformation of their country -- having been born after the launching of China's reform process. These youth -- many of whom are well-educated, tech-savvy and hooked into global culture -- are now in turn changing China's society. Growing numbers of Chinese youth now study overseas, especially in the US.

Indeed, since 1978, some 1.5 million Chinese students and scholars have travelled overseas for studies. Three Ways to Bridge the Employability Gap in the Developing World. What are the skills needed for employability in the 21st century economy? 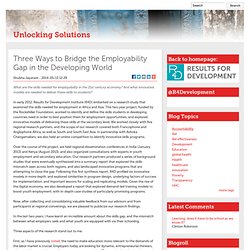 And what innovative models are needed to deliver these skills to students? In early 2012, Results for Development Institute (R4D) embarked on a research study that examined the skills needed for employment in Africa and Asia. This two year project, funded by the Rockefeller Foundation, worked to identify and define the skills students in developing countries need in order to best position them for employment opportunities, and explored innovative models of delivering these skills at the secondary level. We worked closely with five regional research partners, and the scope of our research covered both Francophone and Anglophone Africa, as well as South and South East Asia. Renewing America » Is There a Skills Gap? It’s Less Clear-Cut Than You Think. Case worker Jessica Yon discusses job eligibility for unemployed people at a jobs center in San Francisco, California (Robert Galbraith/Courtesy Reuters). 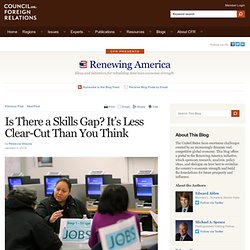 Closing the “skills gap” is high on the list of priorities for Washington policymakers. But the debate behind the skills gaps—whether it exists, how large it might be, and what to do about it—is much less clear-cut than a casual reading of the papers would suggest. Skills Gap Hurts Technology Boom in India. Training India: Is skills gap holding the economy back? 27 November 2013Last updated at 19:15 ET By Yogita Limaye Business reporter, BBC News Mechanical skills students are in high demand with employers, as Yogita Limaye reports In the past two years, India's economy has seen a sharp slowdown and that has had a direct impact on youth unemployment, particularly for graduates chasing white-collar jobs. 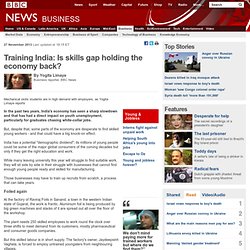 But, despite that, some parts of the economy are desperate to find skilled young workers - and that could have a big knock-on effect. Asia Must Close Skills Gaps, Go High Tech to Sustain Future Growth - ADB. Skills Gap and Poor Talent Adaptability Cost Global Economy $150 Billion. Kingdom facing skills gap. Global unemployment has broken an all-time record with an average rate of 6 per cent this year, which is expected to remain until 2017. 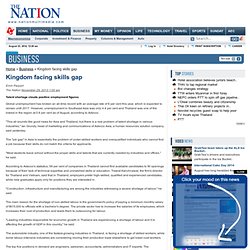 However, unemployment in Southeast Asia was only 4.4 per cent and Thailand was one of the lowest in the region at 0.8 per cent as of August, according to Adecco. "This all sounds like good news for Asia and Thailand, but there is a real problem of talent shortage in various industries," Ian Grundy, head of marketing and communications of Adecco Asia, a human resources solution company, said yesterday. Skills Gap Hurts Technology Boom in India. Training India: Is skills gap holding the economy back?

Companies Losing Money to the Skills Gap, According to CareerBuilder Study - CareerBuilder. Asia Must Close Skills Gaps, Go High Tech to Sustain Future Growth - ADB. Skills gap a growing problem - Market Business News. A growing number of companies and organizations are planning to take on more staff during the next 12 months as their prospects for expansion improve, but 63% of them have expressed serious concern about the current skills gap that makes it difficult get the right people. 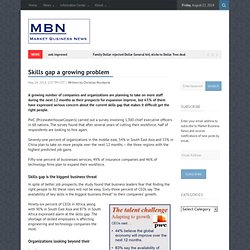 PwC (PricewaterhouseCoopers) carried out a survey involving 1,300 chief executive officers in 68 nations. The survey found that after several years of cutting their workforce, half of respondents are looking to hire again. Seventy-one percent of organizations in the middle east, 54% in South East Asia and 53% in China plan to take on more people over the next 12 months – the three regions with the highest predicted job gains. Sustainable-growth-asia-pacific.pdf. Global press room- Skills Gap Is Hindering Growth For Businesses – PwC Report. Business leaders are calling for government to prioritise initiatives that help foster a skilled workforce, as more than half of CEOs around the world (58%) say a lack of key skills is hampering their growth prospects. 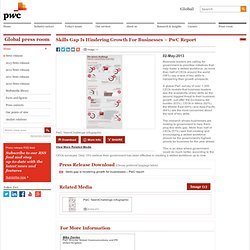 A global PwC survey of over 1,300 CEOs reveals that business leaders see the availability of key skills as the second biggest threat to their business growth, just after the increasing tax burden (63%). CEOs in Africa (82%), the Middle East (69%) and Asia-Pacific (64%) are the most concerned about the lack of key skills. The research shows businesses are looking to government to help them plug this skills gap. More than half of CEOs (57%) said that creating and encouraging a skilled workforce should be the government's highest priority for business for the year ahead.

This is an area where government could do much better, according to the CEOs surveyed. Universities must better prepare young people for labour market. Asia’s universities must align more closely with labour market needs to ensure graduates have the skills and knowledge demanded by employers, according to a new Asian Development Bank (ADB) report, one of many released by international and regional organisations this year stressing the need for higher education to produce labour-market skills. 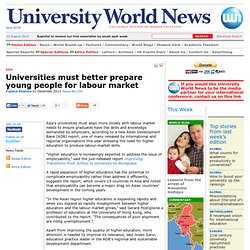 “Higher education is increasingly expected to address the issue of employability,” said the just-released report Improving Transitions from School to University to Workplace. A rapid expansion of higher education has the potential to complicate employability rather than address it efficiently, suggests the report, which covers 15 countries in Asia and noted that employability can become a major drag on Asian countries’ development in the coming years. ASEAN, China must bridge HE and workforce skills gap. Countries of the Association of South East Asian Nations (ASEAN) and China face serious disconnects between the knowledge and skills that their higher education systems provide graduates, and the skills needed for the countries’ future development. Education reforms and more international knowledge exchange and collaboration will be needed to bridge this gap and should be the first task for the ASEAN as it moves towards economic integration, according to speakers at the British Council’s Going Global 2013 conference held in Dubai from 4-6 March.

The ASEAN – comprising Brunei, Cambodia, Indonesia, Laos, Malaysia, Myanmar, Philippines, Singapore, Thailand and Vietnam – will become an ‘economic community’ and regional common market by 2015, with important implications for its workforce and skills development. However, higher education systems across the 10 nations suffered from disconnects with the needs of employers and with secondary-level and vocational education. Challenges. CHINA: Pressure to improve graduate job skills. CHINA: Pressure to improve graduate job skills. Cisco in major drive to ease Asia-Pacific skills shortage.

Vatsun Thirapatarapong, managing director of Cisco in Thailand and Indochina, said the tech giant was committed to meeting the critical demand for high-skill workers through strategic programmes and collaborations for current and future generations. "We are now entering the Internet of Everything phase, in which the network plays a critical role. It must provide an intelligent, manageable and secure infrastructure that can scale to support billions of people, intelligent devices and 'things' [such as sensors]," he said.