Present perfect (révision facile)-anglais. What do we mean by "sex" and "gender"? What Each of Facebook’s 51 New Gender Options Means. For ten years, the social network limited billions of people identifying as either male or female. 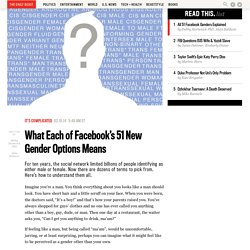 Now there are dozens of terms to pick from. Here’s how to understand them all. Imagine you’re a man. You think everything about you looks like a man should look. You have short hair and a little scruff on your face. If feeling like a man, but being called “ma’am”, would be uncomfortable, jarring, or at least surprising, perhaps you can imagine what it might feel like to be perceived as a gender other than your own. Most of us never question or think much about our gender, but it’s an essential part of our identity.

While Facebook has always used sex terms (male and female) to describe users’ genders, their recognition of the diversity of gender identities and presentations is a welcome one. Sex refers mainly to biology and is a configuration of chromosomes, hormones, gonads (ovaries, testicles), reproductive units (sperm, egg), and internal and external anatomy. 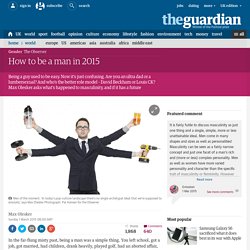 You left school, got a job, got married, had children, drank heavily, played golf, had an aborted affair, never spoke about your feelings under any circumstances, and died of a heart attack aged 56. Easy. But we’re well into the 21st century and the rule book for men (now an ebook) has been torn up (corrupted). These days, things are different. Johnny Weir Olympic Press Conference. Johnny Weir On His Journey & Figure Skating Success. Rugby Union - Ex-Lion Gareth Thomas reveals he is gay. Former Wales and Lions captain Gareth Thomas has broken one of the major taboos that surround sport by revealing he is gay. 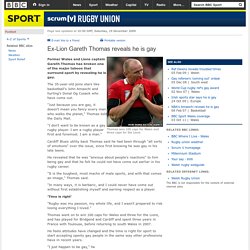 The 35-year-old joins stars like basketball's John Amaechi and hurling's Donal Og Cusack who have come out. "Just because you are gay, it doesn't mean you fancy every man who walks the planet," Thomas told the Daily Mail. "I don't want to be known as a gay rugby player. I am a rugby player first and foremost. I am a man. " Cardiff Blues utility back Thomas said he had been through "all sorts of emotions" over the issue, since first knowing he was gay in his late teens.

He revealed that he was "anxious about people's reactions" to him being gay and that he felt he could not have come out earlier in his rugby career. "It is the toughest, most macho of male sports, and with that comes an image," Thomas said. The Inspiring Gareth Thomas Shares His Story. Caster Semenya, South African Runner, Is Definitely Female, Says Family. FAIRLIE, South Africa — She wore pants instead of a skirt to school, played soccer with the boys and was teased about her masculine looks. 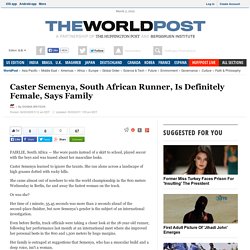 Caster Semenya learned to ignore the taunts. She ran alone across a landscape of high grasses dotted with rocky hills. She came almost out of nowhere to win the world championship in the 800 meters Wednesday in Berlin, far and away the fastest woman on the track. Or was she? Her time of 1 minute, 55.45 seconds was more than 2 seconds ahead of the second-place finisher, but now Semenya's gender is the subject of an international investigation. Even before Berlin, track officials were taking a closer look at the 18-year-old runner, following her performance last month at an international meet where she improved her personal bests in the 800 and 1,500 meters by huge margins.

Video: Trans man pregnant with second baby · PinkNews. Thomas Beatie, the first trans man to give birth has revealed that he is expecting again. 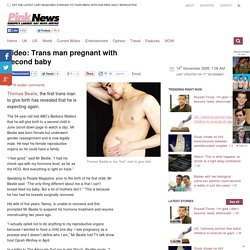 The 34-year-old told ABC’s Barbara Walters that he will give birth to a second child in June (scroll down page to watch a clip). Mr Beatie was born female but underwent gender reassignment and is now legally male. He kept his female reproductive organs so he could have a family. “I feel good,” said Mr Beatie. “I had my check-ups with my hormone level, as far as the HCG. Speaking to People Magazine, prior to the birth of his first child, Mr Beatie said: “The only thing different about me is that I can’t breast-feed my baby. His wife of five years, Nancy, is unable to conceive and this prompted Mr Beatie to suspend his hormone treatment and resume menstruating two years ago.

“I actually opted not to do anything to my reproductive organs because I wanted to have a child one day. The couple’s second child is due in June 2009. Scot Norrie May-Welby has now been recognised as neither a man or a woman. A SCOT looks to have made history after winning the right to be recorded as neither male nor female. 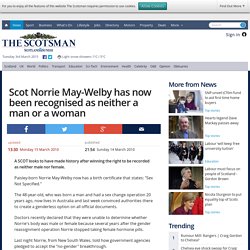 Paisley-born Norrie May-Welby now has a birth certificate that states: "Sex Not Specified. " The 48-year-old, who was born a man and had a sex change operation 20 years ago, now lives in Australia and last week convinced authorities there to create a genderless option on all official documents. Doctors recently declared that they were unable to determine whether Norrie's body was male or female because several years after the gender reassignment operation Norrie stopped taking female hormone pills.