How to be human- Examples

The True Story Of How Mr. Rogers Sued The KKK And Won. After he learned that the Missouri chapter of the Ku Klux Klan was impersonating him in order to spread racist messages to kids, Mr. 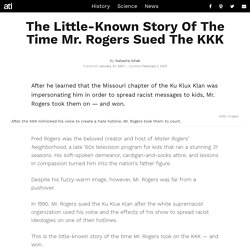 Rogers took them on — and won. Getty ImagesAfter the KKK mimicked his voice to create a hate hotline, Mr. Rogers took them to court. Fred Rogers was the beloved creator and host of Mister Rogers’ Neighborhood, a late ’60s television program for kids that ran a stunning 31 seasons. His soft-spoken demeanor, cardigan-and-socks attire, and lessons in compassion turned him into the nation’s father figure. Despite his fuzzy-warm image, however, Mr. In 1990, Mr. This is the little-known story of the time Mr. Mr. 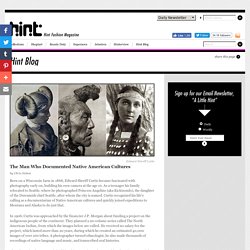 As a teenager his family relocated to Seattle, where he photographed Princess Angeline (aka Kickisomlo), the daughter of the Duwamish chief Seattle, after whom the city is named.

James Cromwell: 'In jail, everyone recognises my face' James Cromwell, veteran actor, Oscar nominee and star of LA Confidential and The Green Mile, is listing what he hates about Hollywood. 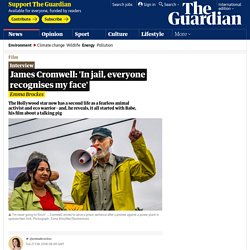 “I don’t like the system,” he says. “I don’t like what it does to people. I don’t like the values. I don’t like the class system. I don’t like the disparity in pay, for men and women, and men and men.” In 1938, Nazis demanded to know if ‘The Hobbit’ author was Jewish. He responded with a high-class burn.  Grace hopper. A sexist troll attacks Sarah Silverman. She helps him. Click 2x. Living with hydrocephaly. 77 year old ballet dancer. Woman Spots A Stranger Leading A Parade Of Animals Down The Street. One day, while visiting her mother’s home in Turkey, Dilara İlter noticed a remarkable scene unfolding outside the window. 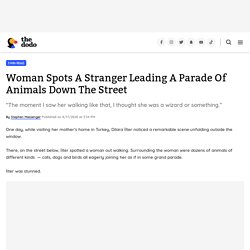 There, on the street below, İlter spotted a woman out walking. Indigenous Runner Rosalie Fish Runs For Her People. Rosalie Fish is an enrolled member of the Cowlitz Tribe of southwest Washington. 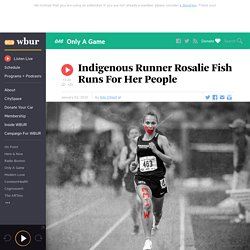 She started running when she was a student at a public middle school in south Seattle. She liked staying in shape, hanging out with her friends, improving her times. This 9-Year-Old Russian Boy ‘Sells’ His Custom Pet Paintings For Food And Supplies For Shelter Animals. Not all heroes wear capes but their good deeds speak for themselves. 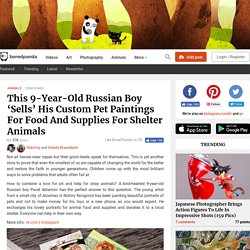 This is yet another story to prove that even the smallest of us are capable of changing the world for the better and restore the faith in younger generations. Children come up with the most brilliant ways to solve problems that adults often fail at. People are loving this Iowa man’s hilarious and honest obituary. How to be a human.

NOT How to be Human 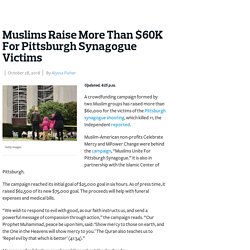 A crowdfunding campaign formed by two Muslim groups has raised more than $60,000 for the victims of the Pittsburgh synagogue shooting, which killed 11, the Independent reported. Muslim-American non-profits Celebrate Mercy and MPower Change were behind the campaign, “Muslims Unite For Pittsburgh Synagogue.” It is also in partnership with the Islamic Center of Pittsburgh. The campaign reached its initial goal of $25,000 goal in six hours. As of press time, it raised $62,500 of its new $75,000 goal. “We wish to respond to evil with good, as our faith instructs us, and send a powerful message of compassion through action,” the campaign reads. Messages of solidarity were shared throughout the day Sunday. Walmart cashier steps in when nail salon refuses wheelchair-bound woman. BURTON (WJRT) (8/3/2018) - A simple act of kindness is making a big impact. 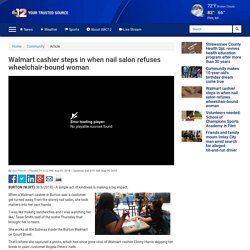 When a Walmart cashier in Burton saw a customer get turned away from the store's nail salon, she took matters into her own hands "I was like making sandwiches and I was watching her like," Tasia Smith said of the scene Thursday that brought her to tears. She works at the Subway inside the Burton Walmart on Court Street.

That's where she captured a photo, which has since gone viral, of Walmart cashier Ebony Harris skipping her break to paint customer Angela Peters' nails. Hello my brother from another mother! Frozone Dances La Chona With Tio Choko. Mr. Rogers and Why Kind Men Freak Us Out click 2x. Girl being welcomed back by her friends after returning to school with a prosthetic leg. Katlego Kolanyane-Kesupile: How I'm bringing queer pride to my rural village. Won’t You Be My Neighbor review: a subversive Fred Rogers documentary. The older man was paused at the top of an escalator afraid to hop on. This young man offered the simplest kindness: an out-reached arm and a "can I help you on, sir?" 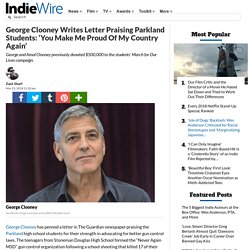 The teenagers from Stoneman Douglas High School formed the “Never Again MSD” gun control organization following a school shooting that killed 17 of their fellow classmates and teachers. Their efforts will culminate in the March For Our Lives this Saturday, March 24. Earlier this year, George and Amal Clooney announced a $500,000 donation to the March For Our Lives campaign. Marches will be held in Washington D.C. and across the country on March 24 in order to advocate for stricter gun laws.

Images That Capture The Human Spirit click 2x. I was afraid of change until this happened. Barber Gives Homeless Free Cuts. Clean sweep. Syrian refugee hands in 150k euros found in wardrobe donated by German charity to police. 'Muhannad M' had only recently moved into new flat in Minden, GermanyHe was assembling furniture donated to him when he discovered moneyFound 50,000 euros in cash and savings books containing 100,000 euros By Julian Robinson for MailOnline and Associated Press Published: 11:56 EST, 28 June 2016 | Updated: 08:01 EST, 30 June 2016 A Syrian refugee handed in 150,000 euros to police - after finding the cash in a wardrobe that had been donated to him. 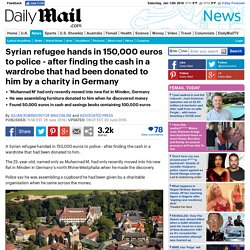 The 25-year-old, named only as Muhannad M, had only recently moved into his new flat in Minden in Germany's north Rhine-Westphalia when he made the discovery. Police say he was assembling a cupboard he had been given by a charitable organisation when he came across the money. Waking up is a roller coaster of emotions.

105-year-old becomes world’s oldest person to ride rollercoaster  Joe Biden comforting Meghan McCain – a heartwarming moment and a victory for decency. I don’t know about you guys, but this last year has left me feeling pretty raw inside. The constant psychic stress of Donald Trump’s presidency alone has been enough to set me – and a lot of other people – constantly on edge. Saving a wild bunny from the California fires. The Extraordinary Life of Simona Kossak. Janusz R. Kowalczyk Simona Kossak: they called her a witch, because she chatted with animals and owned a terrorist-crow, who stole gold and attacked bicycle riders.

She spent more than 30 years in a wooden hut in the Białowieża Forest, without electricity or access to running water. A lynx slept in her bed, and a tamed boar lived under the same roof with her. She was a scientist, ecologist and the author of award-winning films, as well as radio broadcasts. I hope everyone's Thanksgiving is as happy as these two "FREE HUGS" guys happening upon each other in the wild. Man sits with gorilla after its mother... - Newscrusher: Future. EMT feeling the music. Koko the Gorilla meets Robin Williams. Meet Rhiannon Giddens, Newly Minted MacArthur 'Genius' : The Record. On Wednesday morning, Rhiannon Giddens was awarded a MacArthur "Genius Grant. " Courtesy of the artist hide caption toggle caption Courtesy of the artist. Understanding The Roots Of Human Altruism : 13.7: Cosmos And Culture.

Monsitj/Getty Images/iStockphoto This summer, Florida beachgoers watched in astonishment as more than 70 strangers spontaneously formed a human chain that extended out into the whorls of a vicious riptide. Together they rescued 10 swimmers from drowning, including two young boys, their parents and their grandmother. Among the rescuers was Jessica Simmons, 29, who, upon hearing the swimmers' screams, told herself, as she later recalled to the Panama City News Herald: "These people are not drowning today... See How Syrian Zoo Animals Escaped a War-click 2x.

Pakistani Law Student Wins Case Against Classmate Who Stabbed Her After She Ignored His Advances : Goats and Soda. Khadija Saddiqi, 22, stands outside her family home with an armed guard who was assigned to protect her by the wife of the chief minister of Punjab. Don't need words to be a good sport - or good human (under 12 soccer) Behind a WWII internment camp’s barbed wire, two Scouts forged a bond. It endured when they both entered Congress. An epic political and personal bond, forged behind barbed wire. I'm Black. I'm White. I'm Both. I'm Neither. MESSAGE TO THE READER: This blog post contains strong language. I'm black. Longevity Expert Dr. Shigeaki Hinohara Offers Tips for a Long Life.

Photo: Japan Times. Benefits of Living Alone Showcased in Charming Illustrations. An Interview with Mary Johnson, a Nun Who Worked Under Mother Teresa and Later Became an Atheist – Friendly Atheist. Twenty years ago, Mary Johnson was a nun. In fact, until 1997, Johnson was serving as a nun under Mother Teresa in the Missionaries of Charity. Patrick Speaks through sign first time at 15. Breastfeeding Mom Responds To Museum's Request To Cover Up With Tweets About Art. Neil Gaiman. Transgender Americans make up 1-in-300 residents. Collins and Murkowski stood up for women over the threats of men. 8 great lessons from Mister Rogers that are still true when you're an adult. Mister Rogers TV Hall of Fame Special Appearance by Jeff Erlanger 1999. Iranian Brothers Use Mobile Phones To Build the Next Generation Of Doctors In Syria : Goats and Soda. Web Comic: The Syrian Scientist Who Risked His Life For A Chance At His Dream : Goats and Soda.

Kid makes new friends PS nix on derogatory words " wheelchair bound" "The Kiss of Life" July 17, 1967, Jacksonville, FL. Electrical lineman J.D. Thompson ran about 400 feet and climbed a 20-foot pole to help his friend, Randall Champion, who had touched a hot wire. Newspaper photographer Rocco Morabito was driving by and t. Francesca Cesari photos mothers breast-feeding their babies. Secrets Of Breast-Feeding From Global Moms In The Know. Nobel Peace Prize Winner's Message To America: 'All Children Are Our Children' : Goats and Soda. Ricky & Doris: An Unconventional Friendship in New York City. With Puppets! Design should include everyone.